A homelessness study by the regional social services group indicates there could be as many as 225 people or more in Prince Edward County unsure of where their next shelter will be. Connor Dorey, Manager of Prince Edward-Lennox & Addington Social Services addressed council regarding his recent Point-in-Time Count (PiTC) Homelessness Enumeration Study during the February 10th Committee of the Whole Meeting.

In his presentation, Dorey illustrated the number and basic demographics of people who currently find themselves homeless in the Prince Edward, Lennox and Addington areas. As Dorey explained, there is also a by-name-list (BNL) that captures a more specific picture of those experiencing homelessness.

With so much conversation centering around affordable housing, it is important to consider the intricately linked issue of homelessness.

“It’s important that, as we have that conversation about housing affordability, we also consider the earlier stages of the housing continuum-that being homelessness,” stated Dorey.

Dorey and his team extracted data about homelessness using both a questionnaire and by observing those experiencing homelessness. In addition to the 68 who completed a questionnaire, 27 were observed. Nearly all of the participants expressed wanting help to rectify their situation.

“Of the 68 questionnaires we completed, 90 per cent identified they want to continue engaging with services…”said Dorey.

There are several key findings in Dorey’s study, among which there are 95 people in Prince Edward, Lennox and Addington Counties that are currently experiencing homelessness.

Of those 95 people, 45 live in the County. Of those, Dorey noted most could be considered “provisionally accommodated”.

In other words, they have a roof over their head-whether that of a friend or relative. “There is a roof over their head but no long-term security,” commented Dorey. Nine per cent of those questioned are unsheltered. These could be people sleeping in a public space, tent, vehicle, or in some cases, not sure where they will sleep on any given night.

“The definition of homelessness is not black & white,” he said. Further breakdown of the questionnaire/observational results revealed a large proportion of participants identify as being Indigenous or having Indigenous Heritage. Dorey described this as an overrepresentation within the homelessness picture with one in five homeless people in the Prince Edward, Lennox and Addington area falling into the above category.

According to the collected data, 67 per cent of participants described themselves as being on their own. More evidence of social inequality could be found in that a large proportion of those experiencing homeless are currently in receipt of the Ontario Disability Support Program (ODSP) or Ontario Works (OW)

“It’s clear the largest representation are in receipt of ODSP or OW for their income,” said Dorey, adding some were in receipt of various seniors benefits or even low income earners.

Another key finding of the study was that roughly 33 per cent of the participants have been involved either in foster care or a group home setting.

Again, Dorey described this as “significant over-representation.” Unsurprisingly, the study concluded that finances were the largest barrier for the participants to obtain secure, long-term housing. “There are potential social inequalities that may have resulted in homelessness. It is important to help obtain but also retain housing,” Dorey stressed.

Unfortunately, homelessness is currently being dealt with on an emergency basis as opposed to proactively, commented Dorey, who added that the reason for housing loss needs to be addressed.

“In many cases, we’re dealing with individuals who are experiencing homelessness at the present, whereas we need to focus on opportunities that support people from getting to that state,” he said.

Before concluding, Dorey was careful to note no study is perfect and both hidden homelessness and the pandemic presented barriers to collecting data. Councillor Mike Harper inquired as to the estimated number of local people may be experiencing homelessness.

“You started by saying your estimate was 95 homeless in the region,” said Harper. “If you were to say, based on all you know, could you take an educated guess as to what that number might actually be had you been able to deal with the measurement under different circumstances?”

Dorey replied that, in general, for every one person identified as homeless, there are between three to five others meaning of the 45 in Prince Edward County that have been identified, that number is likely closer to 225 or more.

“For every individual you are able to enumerate there are potentially three to five more experiencing homelessness,” he explained. When asked about the prevalence of hidden homelessness in a rural setting such as the County, Dorey replied it is far more prevalent in areas such as this.

Providing a comment from the audience was Lynn Donovan who spoke to the issue of homelessness/lack of affordable housing. Donovan is the Minister at St. Andrew’s Presbyterian Church and Chair of Reaching for Rainbows (a play-based, after-school program for girls).

“In 2012, we established our hall at St. Andrews for our girls,” began Donovan. “I will never forget sitting down with one of the girl’s grandmothers who said ‘there is going to be a time where the only place people like us can live is north of Highway 7.”

Drawing on other personal stories, Donovan described two friends who are both single women in their 60’s living alone in apartments here in the County.  While one friend, as per Donovan, awaits eviction as her building has just been sold, another is hoping her apartment building will not become expensive condominiums after having recently been sold as well.

“What we all appreciated about living in the County, those who have lived here forever and those who continue to move here, is that this is a community where people know our name,” expressed Donovan. “This is a community where friendships are easily forged, where a sense of belonging is not elusive and we know-particularly as a result of this pandemic-that we need the kinds of friendships and belongings that small communities offer.”

The evolution of people coming here to seek connection and refuge from a fast-paced world has precipitated not only a housing crisis, but also a human crisis, according to Donovan. This, she pointed out, is happening throughout the world. 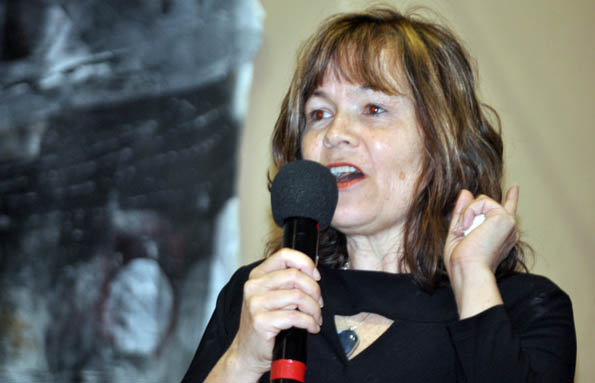 “This evolution of our community has been from not just a housing crisis but a human crisis. The county is just a microcosm of the human crisis that has been slowly unfolding around the world as housing has become not a basic human right but another way to accumulate wealth or add to personal capital,” Donovan argued.

Councillor Kate MacNaughton, while moved to tears by Donovan’s words, asked whether anything other than income disparity might affect the homelessness issue.

“Every year there are families ripped apart due to a lack of means, so when you see the income disparity growing and see people being put out of their homes because there is money to be made on real estate…It’s a human crisis. We need to realign the value of a home versus an investment,” said MacNaughton. “I’m wondering, from your perspective, taking into account the people you work with and your program, is there any item even close to income disparity that prevents those families from having a stronger foothold?”

Donovan illustrated the growing income divide that’s creating a chasm around the world and suggested once more the way in which our society views housing as an investment as opposed to a basic need is part of the problem. She also expressed little faith in government being able to rectify a situation that has been ongoing for decades with little remedy.

“The truth is, our world is becoming more about ‘haves’ and ‘have nots’ and whatever is happening in the world is happening here too.  I’m well aware of the complexity of the conversation around housing, but as long as housing is an investment, that is a problem,” said Donovan.