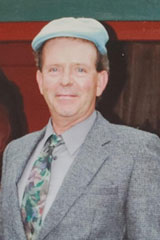 George Peter Kempenaar
Born February 24, 1958, son of Peter and Theda Kempenaar and passed away peacefully in his sleep at his home on Wednesday, February 16, 2022 after a yearlong battle with pancreatic cancer. The stroke 2 years ago and the cancer this past year took its toll on George physically and mentally and we are thankful his suffering is over and he has gone to be with the Lord. George was a bricklayer by trade and was meticulous and took pride is his work. His handiwork can be found throughout Belleville and Prince Edward County.  George’s favourite hobby was hockey, whether it was playing or watching. He especially enjoyed watching hockey with his second mother Dini and her family. He played for several years on various teams and he also spent a number of years coaching minor hockey. George lived in Belleville for several years but ‘The County’ was his home. He was always interested in the local news and enjoyed travelling around the County. George did not have children of his own but had a special love for his four nieces and nephews, their spouses and children. He looked forward to seeing them and would always ask about them as they all lived several miles away. Being with family and watching the children play gave him great pleasure.  He will be missed by his sisters Janet & Mark Myers and Brenda & Steve Greydanus, his nieces and nephews Valerie and Kevin, Chris and Danijela, Kathy & Kendall and Philip & Cathy and great nieces and nephews – Mackenzie, Willow, Aaron, Genevieve, Leo, Mercedes, Cambria and Mateja. He will be missed by Dini and special friends Brenda & Ray and Doug.  Pre-deceased by his parents Peter and Theda Kempenaar. A special thank you to the wonderful staff at the Dr. Douglas A. MacIntosh Cancer Clinic.  Mr. Kempenaar rested at the Rushnell Funeral Home – Picton Chapel, 33 Main Street West, Picton (613-476-2450).  A Memorial Service will be held on Saturday, March 19, 2022 at 11 a.m. from Gilead Fellowship, 2 Downes Avenue, Picton with Pastor Larry Snider officiating.  The family will receive friends on Saturday from 9:30 am until service time. Inurnment at West Lake Church of Christ Cemetery. If desired, memorial donations to Prince Edward County Minor Hockey Association (please make cheque payable to: PECMHA, P.O. Box 363, Bloomfield, K0K 1G0). Online condolences and to share memories of George, please visit: www.rushnellfamilyservices.com