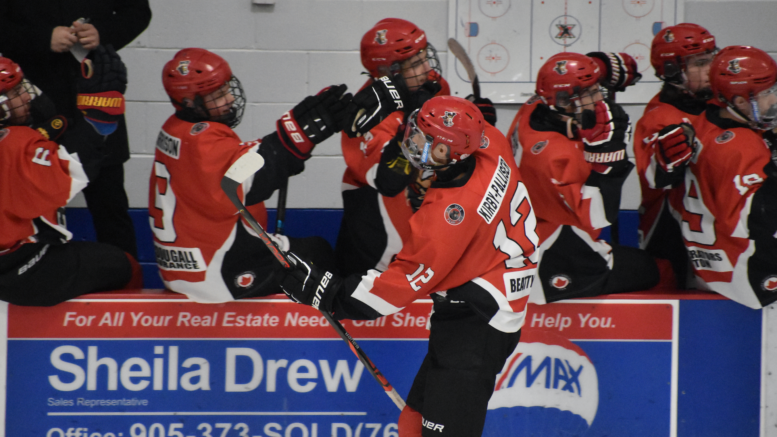 Picton's Nick Kirby had a goal and an assist in the club's 4-3 overtime win in Port Hope Saturday. (Gazette Staff)

The Picton Pirates needed a clutch effort on Saturday to make sure they stayed within striking distance of the Port Hope Panthers and got it from their veteran skaters.

Captain Devin Morrison found the top corner over Panthers net minder Sam Dingle at 3:34 of overtime to lift his club to a 4-3 win over the hosts. 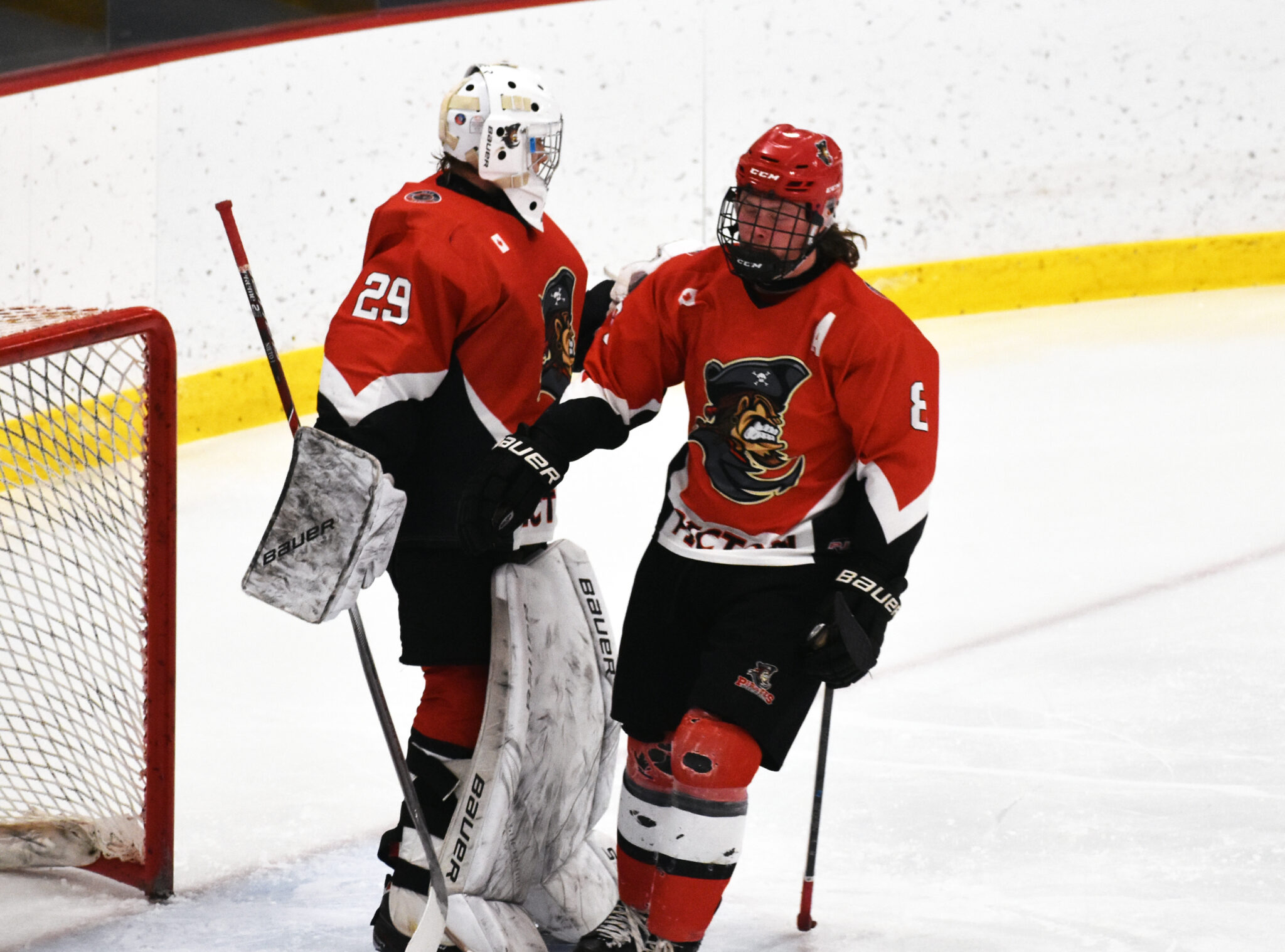 Picton, who never trailed in the contest, sits one point back of the Panthers with a game in hand as the 2021-22 PJHL regular season winds down to less than a handful of games.

“The team knows what’s at stake, we want to be the top seed in the first round after the top two teams receive the bye and we had to come out of there with two points,” Pirates GM Jason Parks said. “These guys are veterans and can respond when they need to.”

Picton got on the board early when defenceman Ryan Bauder started a rush and found Nick Kirby streaking to the net at 1:16. A nice cross crease pass allowed Kirby to tip home his third of the season.

Port Hope tied the game at the midway point of the first when Evan Wright took control of a loose puck in the neutral zone and Nolan Stevenson would put his 24th of the year at 10:32, converting a short area two-on-one.

Picton again would forge in front in the second as Noah Brant led a glorious power play rush, cutting in on the goal line and faking back hand, then putting a for hand past Dingle at 13:04.

Picton rookie starter Nolan Lane was spot on most of the night, making 35 stops.

The locals went to Port Hope without the services of a back up net minder as Owen Willis was away from the team and County Kings AP net minder Aaron MacMullen was unavailable.

“Nolan was outstanding once again. Port Hope torched him the last time these two clubs faced and I’m sure he was thinking redemption the entire way up the 401. He should be very proud of the game he turned in for us,” Parks said.

The Wellington native didn’t have much help on a Wright power play marker that was stopped but tumbled up into the air and over the Picton net minder, landing in the net at 17:25. 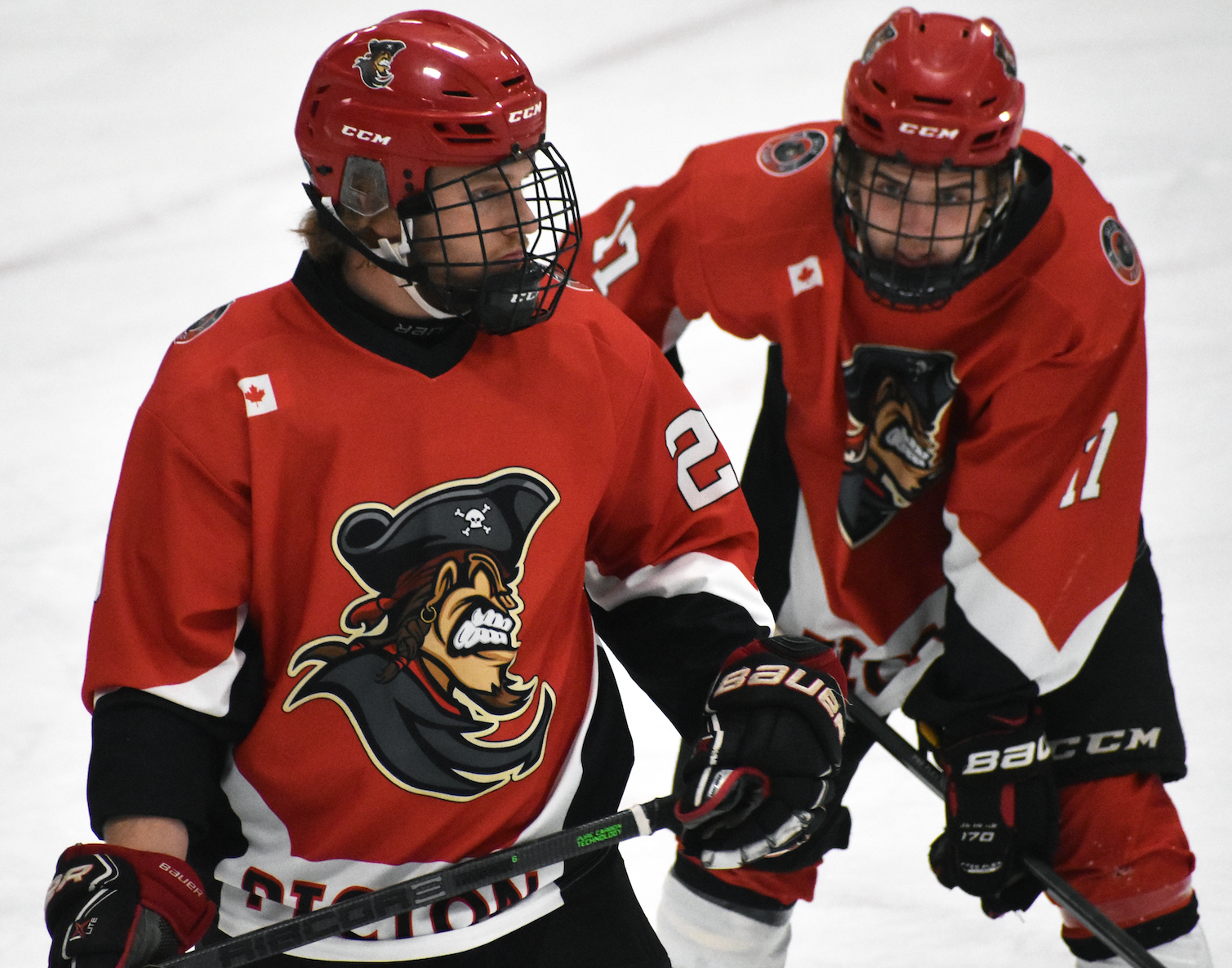 The Pirates added Zack Brooks to the line up in early December. Brooks is the son of former Pirate Ian Brooks. (Gazette Staff)

Picton again would find a go ahead goal and Brant bagged his second of the game and 19th of the year, taking an Owen Dever pass and ripping the puck over Dingle’s right shoulder at 6:30.

The Panthers once again found an equalizer as defender Oz Paziuk made a rush to the far post and after several whacks and hacks, the puck was pushed into the Picton net at 11:41.

The Pirates had a power play opportunity towards the end of the third but couldn’t capitalize.

As Picton’s veterans were solid, rookie Cole Stevenson was elevated to the top power play line and logged some key minutes in the game’s final stages.

In overtime, it would be Stevenson eluding a defender off a half wall rush and the Picton forward drew a tripping foul at 2:46 of the extra session.

“I can’t say enough about what Cole’s  done and how he’s developed this season,” Parks remarked. “He plays such a sound game and know he’s getting some minutes at his natural centre position and he looked like a veteran skater out there in the final minutes when all the chips are on the table.”

Stevenson almost tucked home the winner off a Brant point blast just under halfway through the power play.

The Quinte West native then collected the puck, sent it to the half wall where Morrison collected the feed, played catch with Brant and then waited for a Port Hope defender to screen Dingle, picking the top right corner for his sixth of the season.

“I know Devin’s been squeezing the stick a little bit,” Parks said. “His puck dispensing is as good as I’ve ever seen it- he’s got a career high in assists with 22-  but he’s not had much luck around the net so far. Hopefully this is the goal that changes things.”

Bad weather forced the postponement of Picton’s game on Thursday against Amherstview and that contest will be made up in early March.

The Pirates host the Napanee Raiders on Thursday and then travel to Frankford for a game on Sunday.