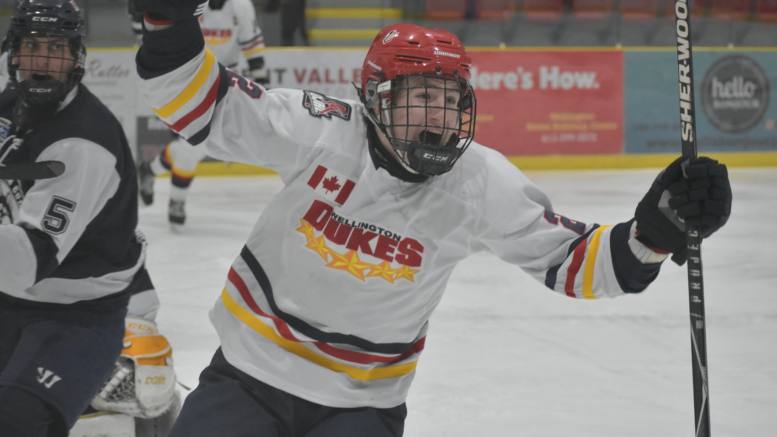 Wellington Duke Creo Solomon's first goal with the club was a big one as his third period tally Wednesday night lifted the home side to a 2-1 win over the visiting Haliburton County Huskies. (Jason Parks/Gazette Staff)

The Wellington Dukes finally climbed into second place in the Ontario Junior Hockey League’s East Division and still have designs on ending the regular season in first.

Wellington scored a pair of one goal victories over the Haliburton County Huskies and then added a lopsided win over the Patriots in Toronto to run their record to 22-11-3, good enough for 47 points, seven back of the division leading Trenton Golden Hawks and even with the Huskies as of Monday morning.

With two games in hand on Haliburton, the Dukes are firmly in the driver’s seat as the regular season reaches its stretch drive portion. 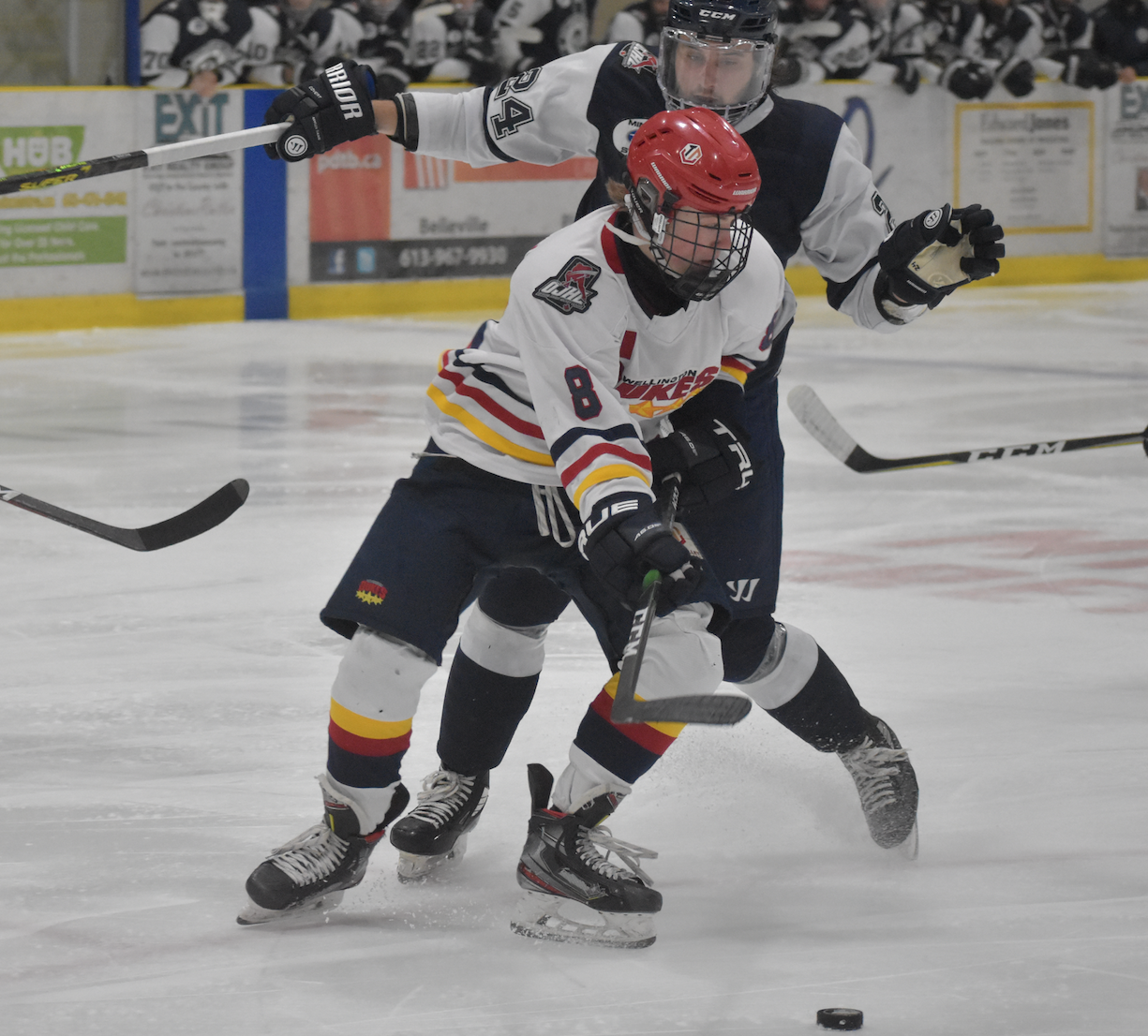 On Wednesday, Wellington played a stingy defensive game and escaped with a 2-1 regulation win over the visiting Huskies in a four point affair.

Wellington was outshot 34-25 by the visitors but netminder Ethan Morrow was sensational.

After a scoreless first and nearly a scoreless second, the clubs traded goals in the late stages of the middle stanza.

Wellington’s David Campbell potted the ice breaker at 18:50, converting on a Jacob Vreugdenhil feed to push Wellington ahead 1-0.

However, the Dukes were unable to nurse the lead to the dressing room as a bad turnover in the Wellington zone on the ensuing shift allowed Christian Stevens to fire home an equalizer 27 seconds later.

In the third, Queen’s University commit Emmet Pierce found Creo Solomon on a two-on-one rush and the Sault Ste. Marie native showed nice finish, jumping into the rush and beating Christian Cicigoi to the far post at the 4:58 mark.

Haliburton tried in vein to push a second goal past Morrow but the Kingstonian was sensational in picking up his 15th win of the campaign.

After Thursday’s game in Caledon was postponed due to weather, Wellington was in Minden on Saturday afternoon and needed overtime to top the host Huskies.

Morrow drew the starting assignment again and made 42 saves in the victory.

Wellington started out of the gate at a full gallop as Ethan Esposito and Vreugdenhil both bested  Cicigoi in the opening five minutes for build a 2-0 lead.

Haliburton cut that margin in half at the 12:57 mark as Bryce Richardson solved Morrow.

It would take until the final second in regulation when OJHL sniper Oliver Tarr used the puck past Morrow in a scramble to give the Huskies a point at the end of regulation.

But Wellington made sure it was them coming out of Minden with the precious extra point as defence man Jonathon Balah set up Captain Pierce at 1:34 of overtime for the club’s 21st win of the season.

On Sunday, Wellington didn’t have to white knuckle their game against host Toronto as the locals cruised to an 8-2.

Wellington put the Pats to bed in the first with three goals and then added four in the second.

Pierce fired a hat trick to pace the Dukes and their offensive burst.

Vreugdenhil, Esposito, Barret Joynt, Campbell and Corbin Roach all got in on the goal act Pierce added a couple of helpers to lead the points parade with five while Balah (3) and Campbell (3) also had multiple assist games.

Matt Dunsmoor made 34 saves for Wellington.

The Dukes are in North York on Wednesday and then return home Friday to host Trenton.