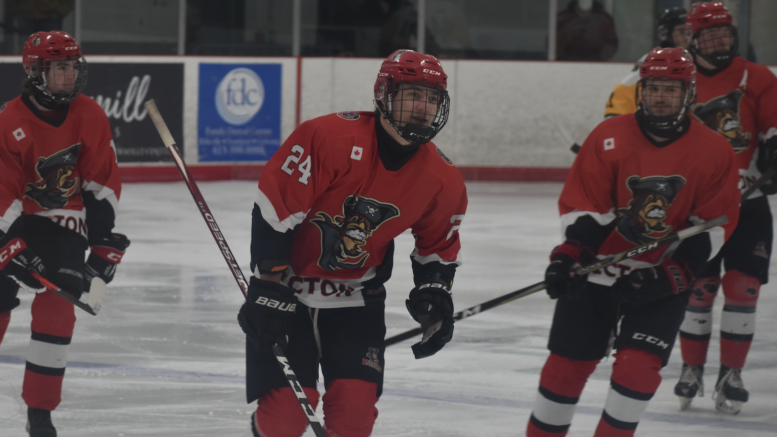 The Picton Pirates started off their weekend with a moral victory.

Then they skated their way to a pair of PJHL regular season victories that vaulted them into third place in the final week of the 2021-22 regular season.

After clawing back from a three goal deficit against the visiting Napanee Raiders on Thursday only to lose in the final moments of the contest, the Pirates managed to best Amherstview, the top team in the Tod Division in overtime at home on Saturday and then followed that effort up with a double digit drubbing of the circuit’s cellar dweller on Sunday in Frankford.

Picton moved its record to 16-12-1, good enough for a one point edge over Port Hope.

The Pirates could seal third place with a regulation point on Thursday when they close out the regular season against Amherstview.

Picton Pirates General Manager Jason Parks said Monday that the club has strung together a pretty impressive stretch of hockey since last weekend’s overtime win in Port Hope and has done so without the services of veterans Derrick Vos and Landon McLellan. 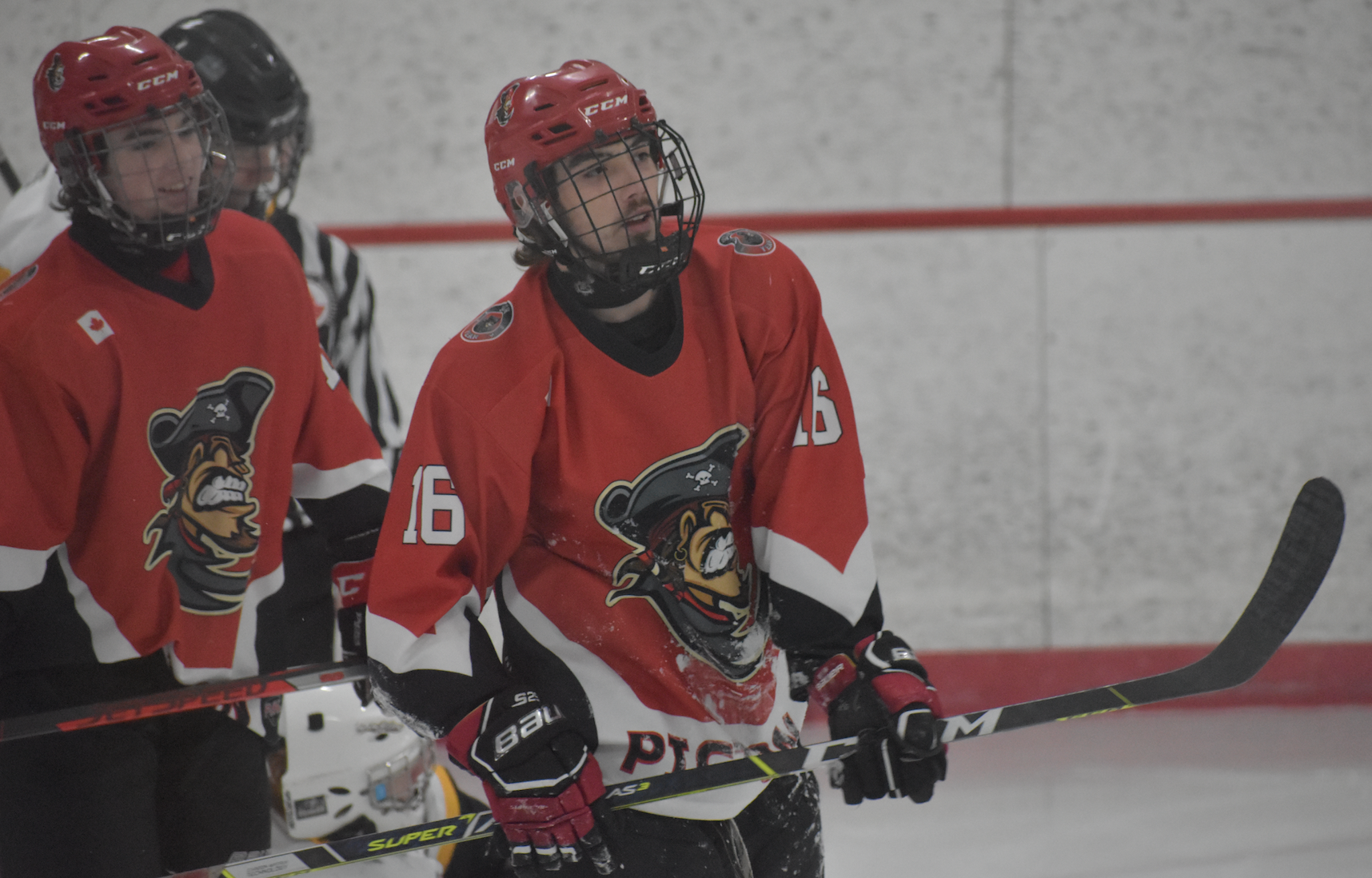 McLellan suffered a broken jaw in practice in mid February and Vos is sitting out a six game suspension and will be available to the club in Game 3 of the first round of the 2022 Schmalz Cup playoffs.

“But you can expect that this time of year with this club and the way the veterans are banding together,” Parks said. “They know this is the last dance for this group and they want to push through and prove a lot of people wrong this time around.”

Picton didn’t get off to a great start on Thursday, falling behind the Raiders 3-0 as Beckett Palmer Stephen, Logan White and Ben White all tallied in the last half of the opening frame.

The Pirates were looking at the same situation as a Feb. 11 contest at the Strathcona Paper Centre, trailing their Skyway Bridge rivals by a field goal after 20 minutes.

But Picton showed some resolve in the second.

Veteran sniper Noah Brant caught Raiders goaltender Bailey Maracle leaning the wrong way at 6:27 to put the Pirates on the board.

Then, at the 11:27 mark, County Kings call up Ben Smith checked in with his second goal as a Pirate, jamming a loose puck over the goal line thanks to help from Nate Boomhower and Devin Morrison.

The Pirates completed the comeback when Boomhower was set up by Cole Stevenson on a powerplay opportunity at 5:25 of the third to make it 3-3.

Picton had a few glorious chances in the midway point of the third and continued to take the play to the Raiders goal with only the superlative saves by Maracle keeping the game tied.

One of Picton’s few mistakes over the final 40 minutes was a dagger however as Ben Chubbs was able to secure a puck on the forecheck and set up Ethan Williams for the game winner with 4:55 left.

Chubbs added an empty netter with seven seconds left to make the final 5-3.

Picton’s Nolan Lane made 31 saves in defeat and kept his club in the contest early.

In a rare home start on Saturday, the Pirates and Jets met up for a make up game and Picton was slow out of the gate again, giving up a 2-0 lead in the first as Matheiu Halle and Matthew Donovan scored to give guest Amherstview a multi-goal lead after 20.

Picton would charge back in the second and tie the game.

Brant picked the corner behind Jets starter Jeremy Piazzi at the 14:34 mark.

An ensuing Pirates power play allowed the club to tie the game at 16:05 as Stevenson found Owen Dever for a tap in and the Belleville native’s 20th tied the game at 2-2.

But the Jets were able to capitalize on a happy bounce off the glass behind Lane and Dawson Frost batted home his 25th with 67 seconds left in the middle stanza.

Down a goal to start the third, a nice cross ice pass off the stick of Jack Dow at the 1:35 mark set up Zack Brooks for his first as a Pirate and tied the game at 3-3.

The Pirates had plenty of chances in the third as they sent 16 volleys Piazzi’s way. 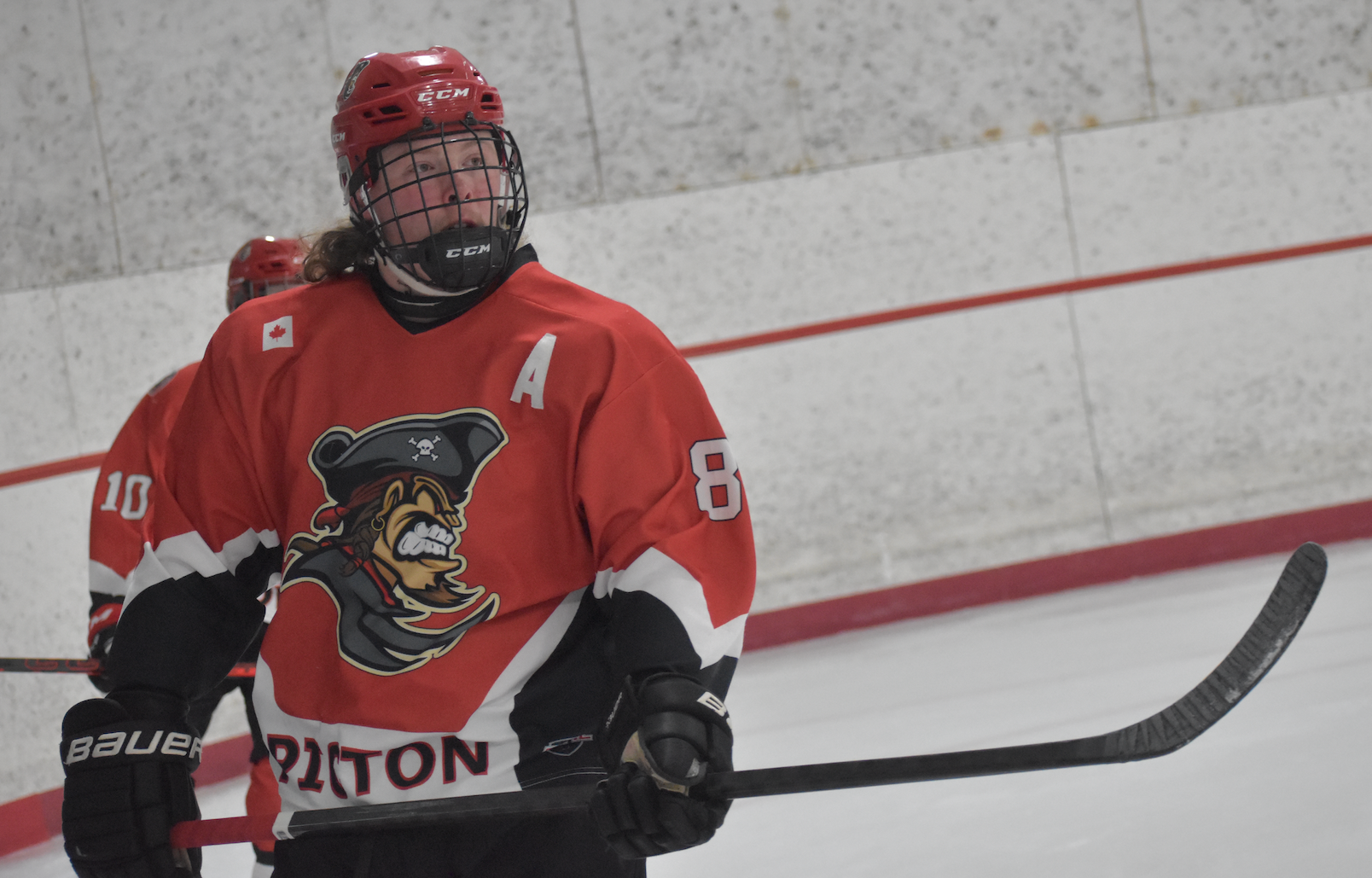 With a minute left in the game, Boomhower would find line mate Ian Harrison in the high slot and the Cressy Bayside native ripped his fourth of the season his over Piazzi’s glove to give Picton their first lead in the contest.

Picton was close to getting out of the period unscathed but with Piazzi on the bench for the extra attacker, Halle, the PJHL’s top scorer, beat Lane to the nearside post for a goal with just five seconds left in regulation.

Early in the extra session, Picton’s Dever wound up fouling a Jets skater in the defensive zone for a penalty and the Pirates, buoyed by Lane’s netminding and an aggressive penalty kill, managed to hold off the hard charging Jets.

“Nolan was huge for us in the clutch moments of that game and Stevenson’s work on the penalty kill in overtime exemplifies why I think he’s the best two-way player in the Tod at his age,” Parks noted.

As Dever emerged from the box in overtime, an errant Jets shot rimmed around the Pirates end and landed at centre ice.

Dever emerged with a sudden break away and after coolly faking forehand on Piazzi, Picton’s overager slid a backhand into the Amherstview net at 4:23 to give the home side the win.

“Owen’s been fantastic for us this year. I know he’s battled with injuries in the past and some observers wondered if he would make the team as an overage player. I shudder to think where we would be right now without him. He’s put it all together in his final year of junior and the team has enjoyed his success,” Parks added.

On Sunday, Picton looked like a team that had beaten the division’s best club going by winning percentage a night prior and the Pirates put the host Huskies to bed early.

Cole Lavender would pot his second of the season through a maze of legs 52 seconds in to give the visitors a lead they would not relinquish. Nick Kirby would put a puck off the water bottle behind Frankford’s starter Hayden Candler at the 2:02 mark and then Boomhower would muscle home the eventual game winner at 8:15.

Picton would tally six in the frame as Reese Hancock, Brant and Dever also lit the lamp.

In the second, goals from Dever, Brant, Dow and Harrison made the Picton lead 10-0 after 40 minutes, making it the first time the locals had achieved double digits.

In the third, the clubs traded goals.

Tyler Sawkins would break up Lane’s shutout bid at the 4:07 mark of the third to get the Huskies on the board at 10-1.

Brant would pump home his hat trick effort at 9:36 of the third period on the power play.

Amelieasburgh native Justin Crowe would fire home his first PJHL goal at the 14:01 mark to add a second tally to the Frankford outing but Brant bagged another power play goal at 16:34 to make the final 12-2.

Brant led all Picton scorers with five points while blue liner Adian MacDonnell had his best outing in the PJHL, racking up three helpers.

Picton’s overage sniper has 25 goals heading into the club’s final game of the regular season.

“He’s a little bit of everything for us,” Parks said of Brant. “He’s gone on a tear offensively with eight goals in five games, he brings quiet leadership to the dressing room, he never takes a shift off, he’s a beast to deal with on the forecheck. He’s another one of those guys that you can count on when the chips are down to respond and find a way through the adversity.”

Parks also had high praise for Lane who was assigned four straight games for Picton and won three of them.

The club was without Owen Willis who was visiting family on the west coast last week but Picton didn’t miss a beat as their 17-year-old rookie netminder was outstanding in handling a heavy workload.

“Posting 11 wins in 16 starts as a rookie in this division should get him plenty of interest among Junior A teams next season,” Parks added “He’s put in the work in his training regimen and it’s paying off big time.”

After Amherstview visits Picton on Thursday, the Pirates will remain idle as the PJHL wraps up its regular season this weekend.

Picton, who will either play Frankford or Campbellford in the first round, will open their playoffs at home on March 10.