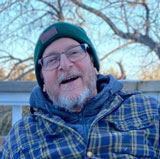 On Monday, February 14, 2022, the Sweeney family lost their admired patriarch. Kevin Alexander Sweeney lost his life at 63 years of age due to medical complications surrounding an abdominal aortic aneurysm. His passing was unexpected and sudden. The devastating loss of Kevin will likely reverberate through the lives of his family, friends, and community for many years to come. Kevin was born to David and Joan Sweeney in Toronto, Ontario. From a very early age, he was found always building, breaking, and fixing – Kevin loved to tinker. He attended Danforth Collegiate and Technical Institute where his aptitude for technology and electronics blossomed. He turned that proficiency into a 42 year long career with Bell Canada as a Computer Technician and IT Infrastructure Specialist. For more than 25+ years, Kevin was a long-standing and enthusiastic member of the Ajax-Pickering Ringette league, and Ringette Canada. During those years he wore many hats – Asst. Coach, Coach, League Coordinator, Fair Play Project, Ajax Assoc. Board Member, Central Region Board Member, Ajax/Pickering Assoc. Board Member, Tournament Committees, and Ringette Ontario Member. To say the rink was his second home would be a gross understatement. He vehemently believed that everyone deserved to experience the joys of ringette and the right to play. He fought every day, tirelessly, for every underdog he knew. Kevin is survived by his mother Joan Sweeney; his admired wife of 40 years, Carol Sweeney; his beloved daughters and son-in-laws, Candice Sweeney and Paul Evans, Meagan Sweeney and Mihael Fofic, and Jacilyn Sweeney and Cameron MacDonnell; and his treasured grand-daughter, Quinn Sweeney MacDonnell.;; and his dear sisters and their spouses, Cheryl and Dave Shannon, and Kim and Eric Belanger. He is predeceased by his father, David Sweeney. No words can completely encapsulate the impact he had on his friends and family and the void that is left in their hearts as a result of his premature passing. Kevin’s ashes will be laid to rest alongside family. Celebration of Life service information will follow at a future date.
The family welcomes donations to the any of the following charities as an expression of sympathy instead of flowers:
• The County Foundation; https://thecountyfoundation.ca/
• Canadian Parks and Wilderness Society; https://cpaws.org/
• Heart & Stroke Foundation; www.heartandstroke.ca
“Rest” was not a term fully embraced by Kevin, so we will instead say “May he forever putter in peace”.