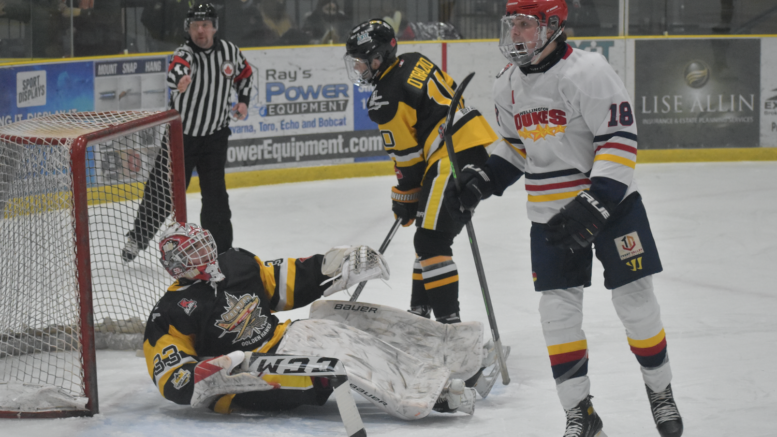 The Wellington Dukes managed three out of a possible four points this weekend to take firm control of second place in the Ontario Junior Hockey League’s East Division and have designs on capturing first.

The Dukes (23-12-4) were able to skate away from the visiting Trenton Golden Hawks on Friday night 5-3 and then managed a regulation point against the Cobourg Cougars on Sunday afternoon.

The locals are hosting the St. Mike’s Buzzers on Tuesday night and then welcome the Mississauga Chargers to Lehigh Arena on Friday. 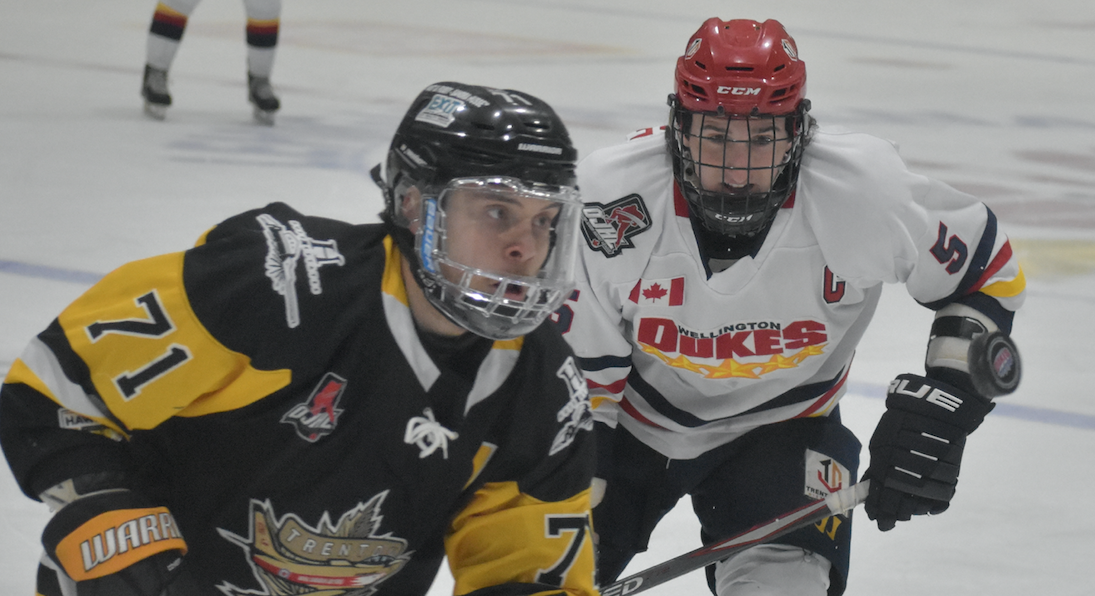 Wellington pulled ahead three games to two in the 2021-22 Hasty P’s Cup thanks in part to three first period goals that went unanswered by the visitors.

At the 5:49 mark of the first, Wellington spark plug Corbin Roach gained a step on a Golden Hawks defender and managed to fire a puck past Trenton starter Ethan Taylor despite being hauled down on the play.

Less than a minute later, rookie Will Mitchell fired home his eighth of the campaign to make it a 2-0 lead for Wellington.

The homeside would add a power play tally in the late going of the first frame when Barret Joint had a deft high zone tip of a Jonahthan Balah point blast at 15:58 to make it 3-0 hosts through one period.

Trenton did a fine job of battling back in the second.

Jake Campbell would set up Aiden MacIntosh in close at 3:31 to carve into the Wellington lead at 3-1.

The Golden Hawks continued to press and a power play opportunity allowed Devin Mauro time and space to bat home a man advantage marker at 12:35 of the second to get the visitors to within a goal.

Wellington needed a response to the pressure placed upon them by the Golden Hawks at the end of the period and got it from Jacob Vreugdenhil.

The Belleville native dashed towards the Trenton crease and knifed a backhand effort over Taylor’s shoulder with 70 seconds left to give Wellington some key insurance heading to the intermission.

Trenton would get to within a goal at the midway point of the third thanks to an unassisted Auston D’Orazio effort at 9:01 but Wellington’s net minder Ethan Morrow shut the door down the stretch, making some of his biggest saves of the 37 shots sent his way in the final minutes.

In the last minute, club captain Emmet Pierce would send his 24th tally into a vacated Trenton net to ice the win at 5-3. 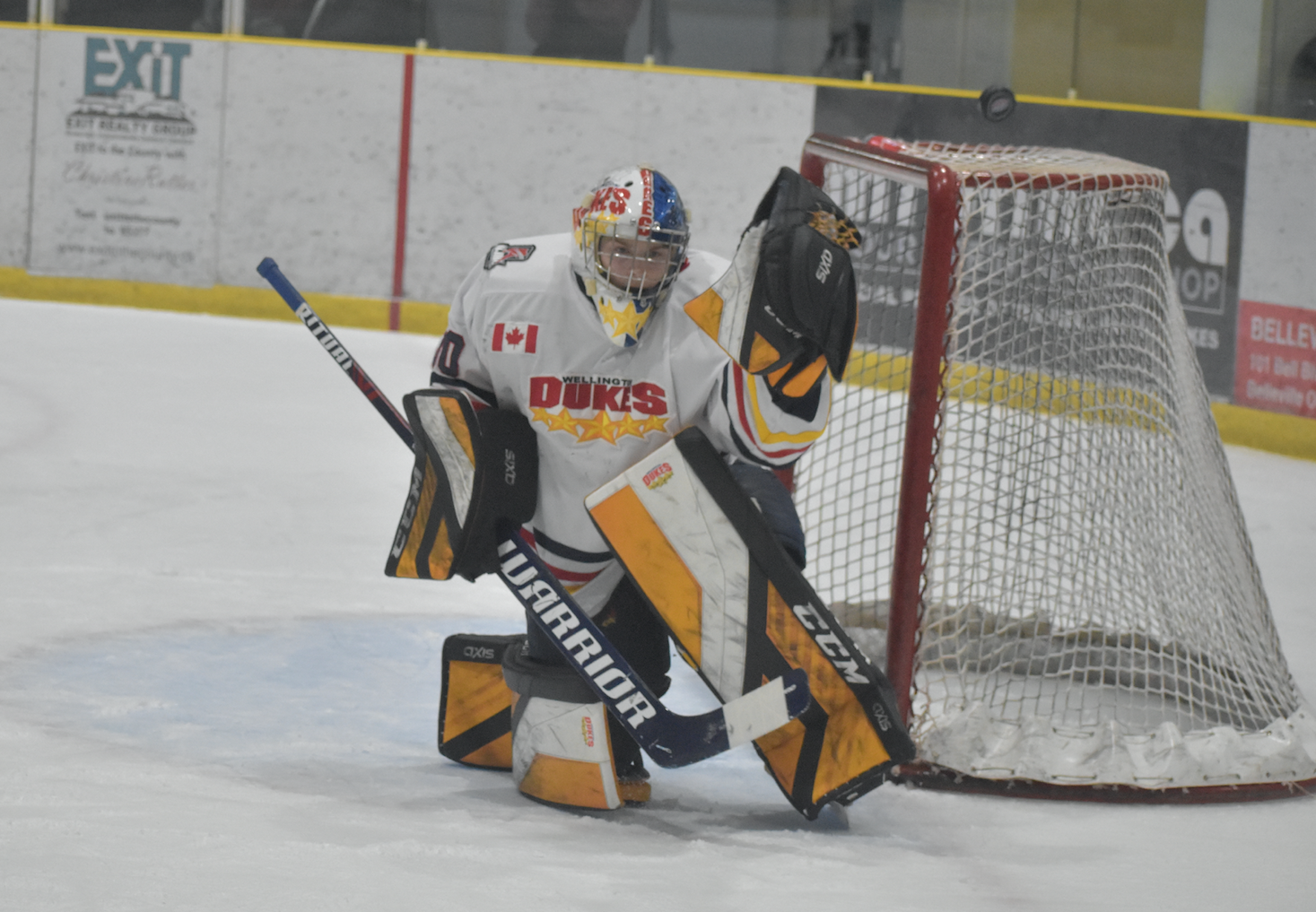 On Sunday, Wellington played Cobourg to a scoreless draw in the opening 20 minutes.

In the second, Andy Reist came off the half wall and ripped a power play goal past Wellington starter Matt Dunsmoor at 3:58 to break the ice.

The Dukes responded just under five minutes later when Emmet Pierce and  Vreugdenhil worked a short two-on-one rush to the Cobourg goal where the captain kept and fired the puck past Cobourg’s Justin Easter at 8:15.

The Dukes struck for their first lead of the contest later in the second in the power play.

David Campbell made a couple of nice moves going to the Cougar net, drew a checker out of position and then set up Joynt at the lip of the crease at 15:03 for a tap in that made it 2-1.

Cobourg was able to respond before the close of the second with their second power play goal of the frame.

Charlie Da Fonesca  nice seem pass to a lurking George Krotiris with 36 seconds left evened the proceedings at 2-2 heading to the dressing room after 40 minutes.

In the third, Wellington’s Campbell put on a one and show, stripping the puck from a Cobourg defender and going in alone on Easter.

Making more moves than one might see in a six hour game of checkers, Campbell faked forehand -backhand before going back to forehand on Easter. The Cobourg goalie managed to make the initial stop but Campbell essentially passed the puck to himself off Easter’s right pad and then deposited the go ahead goal in the opposing net at 8:28.

But the lead didn’t last long.

A Da Fonesca shot from the high slot seemed to be handled by Dunsmoor but the puck found some daylight in the goalie’s paraphernalia. The disc came to rest just behind the Wellington goaler and Krotiris pounced on it for a tap in at 9:49 of the third.

An errant back hand pass at the Cobourg blue line allowed Da Fonesca to race in on Dunsmoor and cash in the game winner at the 2:38 mark of the first overtime.

With the point, the Dukes slid ahead of Haliburton 50 to 49 and Wellington has two games in hand on the Huskies.

The locals trail Trenton for the division lead by six points with 15 games to play, three of those against their arch rival from Quinte West.