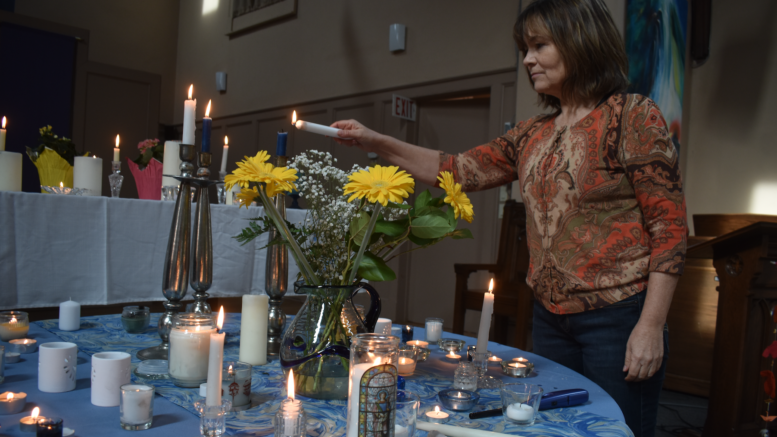 St. Andrew’s Reverend Lynne Donovan lights a candle in solidarity with the people of Ukraine at a vigil held at the church Monday afternoon. (Jason Parks/Gazette Staff)

Around 50 people came through the doors of St. Andrew’s on Monday for a moment of contemplation, prayer and to light a candle signifying support for the people of Ukraine in their most darkest hour since World War II.

As the situation on the ground and in the airspace of the Eastern European country ebbs and flows by the hour, Rev. Lynne Donovan explained it was almost instantaneous and unanimous amongst parishioners that an simple and solemn avenue of support should be offered at the church.

Several members of the public lit candles including County of Prince Edward Mayor Steve Ferguson who, along with councillors and municipal staff, met with Ukrainian counterparts in 2019 as part of a delegation visit.

The bravery of the Ukranian people in their quest for democracy and freedom in the face of such horrors played by the hands of a megalomaniac has not been lost on most Canadians and Donovan said the invasion by Russian President Vladimir Putin’s forces in the shadow of the COVID pandemic is almost too much to comprehend-particularly in the early times of this armed conflict. 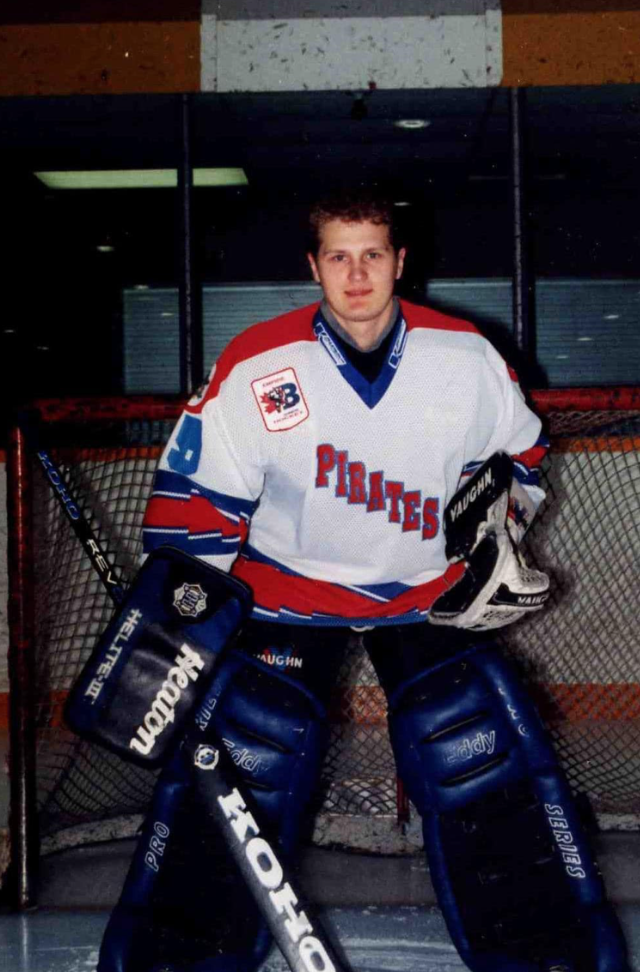 Alex Barankovskiy in 1999 when he was a member of the Picton Pirates. (Submitted Photo)

“People might not be completely clear about what’s happening in Ukraine but in our guts, we know wrong when we see it and we know this will determine the direction of the planet for the next season,” Donovan said. “People are reeling and that doesn’t often come with words but to offer ritual and opportunity to gather, meet and discuss and then respond in this early time is important.”

Among those attending Monday’s vigil was Sue Rose and her son Mark who have a connected interest in Ukraine. Former Picton Pirate goaltender Alex Barankovskiy spent three seasons playing hockey for the local junior team and was in the crease when the Pirates captured their first ever Empire championship March 17, 1999.

Barankovskiy billeted with the Rose family and Mark said “Alex is and will always be family.”

“Alex had a significant impact on all of our lives and through the team, was always very active in the community and willing to volunteer weekly back at Friday Night Bingos, “ Rose said.

Despite not having seen Alex for twenty years, social media has allowed the Roses to keep in contact with Barankovskiy and see him start his own family and flourish as a youth hockey coach in Ukraine.

“The build up and invasion have been stressful and unnerving,” Rose added. “Some sleepless nights and anxious moments waiting for him to reciprocate text messages. Its such a relief to get the ‘we are ok’ from him every morning. But the worry wont go away anytime soon.” Barankovskiy was able to get his daughter out of the country beforehand and Rose mentioned the former goalie is fiercely proud of his home country. “It came as no surprise to hear that he refused to leave himself and abandon his friends and family,” he said.

Barankovskiy reported to Rose on Tuesday morning he had made it through the Russian shelling of his hometown of Kharkiv the previous evening.

On Wednesday, Mayor Ferguson issued a statement and harkened to the visit by the Ukrainian delegation.

“Like many people across Prince Edward County, I am horrified by the scenes of death and destruction in Ukraine as a result of the recent invasion by Russia. We stand in solidarity with the people of Ukraine during these troubling times.

In July 2019, we welcomed a delegation of elected Ukrainian officials to Prince Edward County. They took a keen interest in learning more from our community and other Canadian jurisdictions in order to strengthen their local democracy. To see those values and ideals come under attack in recent days is truly heartbreaking.

Our thoughts are with those friends we made as well as the entire population of Ukraine. I pray for their safety and that of their families, as well as for President Volodymyr Zelensky and the brave Ukrainians vigorously standing up to the Russian armed forces.

At Tuesday’s council meeting I will be bringing forward a motion to pay further tribute to this courageous country.”