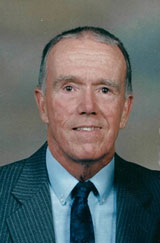 Suddenly entered into rest on Wednesday, March 2, 2022 at Prince Edward County Memorial Hospital, Picton, Ron Atherley of Sheba’s Island died at the age of 85. He was the son of the late Sydney & Mabel Atherley (nee Argue) and husband of the late Margaret (nee Forsyth). Ron was the loving father of Janice Burrows (Ray) of Wooler, Peter (Janet) of Brampton, Stephen (Andrea) of Toronto and the late David. He will be sadly missed by his grandchildren Garret, Sara, Rachel, Brian, Joseph, Mathew, Ash, Daniel and Charlie. Ron is predeceased by his brother James. Mr. Atherley is resting at the Rushnell Funeral Home – Picton Chapel, 33 Main Street West, Picton (613-476-2450). A Memorial Service will be held on Saturday, March 12, 2022 at 2 pm in Picton United Church with visitation for 1 hour prior to the Service. Inurnment at Glenwood Cemetery in the Spring.  If desired, donations to Prince Edward County Memorial Hospital or Picton United Church would be appreciated by the family. Online condolences and to share memories of Ron, please visit: www.rushnellfamilyservices.com