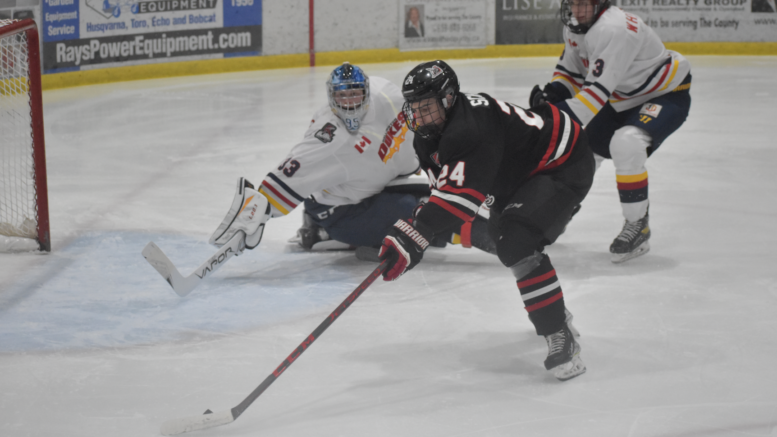 Despite having an open path to the Wellington net, Ryan Schaap was foiled on this scoring attempt Friday night as the visiting Mississauga Chargers fell to the Matt Dunsmoor, Liam Whitaker and the Dukes 8-1. (Jason Parks/Gazette Staff)

The Wellington Dukes may be thin on the back end these days but an observer might not know it as the club racked up five of a possible six points and only allowed four goals over three games during clutch time in the local’s playoff push.

The Dukes (26-12-5) sandwiched lopsided wins at home against Mississauga and Caledon around an overtime setback in Trenton.

After the dust settled after Monday night’s 7-1 sinking of the Caledon Admirals at Lehigh Arena, the Dukes find themselves trailing the East Division leading Golden Hawks by three points while Trenton has a game in hand on the locals.

The clubs face one another Sunday evening, once again from the bandbox on the shores of the Trent River.

Dukes coach Derek Smith was more than ok with the weekend’s point haul and the way Wellington competed and added the overtime setback at the wrong end of Loyalist Parkway in front of television screens from coast to coast on Saturday afternoon should provide plenty of motivation.

“We did a lot of things right this weekend and played to our strengths and anytime you can do that this time of year, it’s a good sign,” Smith said. “We did everything but score in the final minutes of the game on Saturday in a hostile environment so I don’t think we would change much about our game there.”

On Monday evening the Dukes were able to shrug off the overtime loss with a 7-1 walloping of the Caledon Admirals. 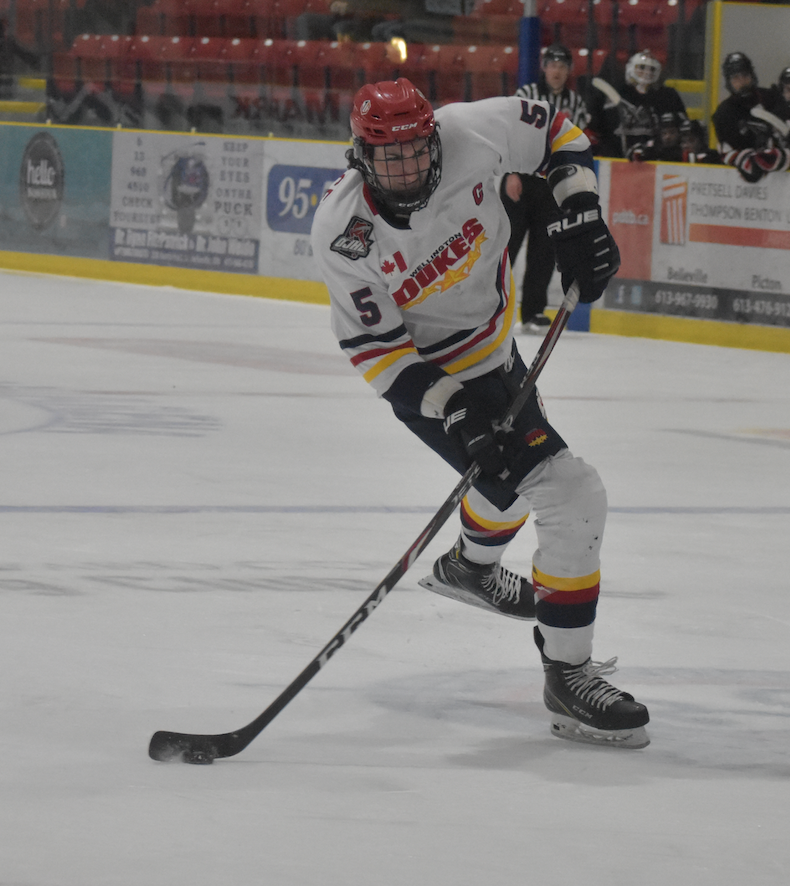 Playing in his 150th game as a Wellington Duke, Jacob Vreugdenhil’s pair of goals helped pace the Wellington attack which put seven pucks on 52 tallies behind Admirals net minder Cale McWilliams before the visitors were able to deny Ethan Morrow a shutout.

Captain Emmet Pierce also had a pair while Harrison Ballard, Jonathon Balah and Brodie McDougall all had singles for Wellington.

Midway through the third, Ray Hou managed to pot a shorthanded goal that was unassisted.

With apologies to Abbot and Costello, Hou’s linemates Watt and Idano were apparently missing on the scoring play.

On Saturday on a national television feed from the Dunc Macdonald Memorial Gardens, Wellington played a tune on pipes of the Trenton Golden Hawks net but it was the hosts that came away singing a winning tune.

After a scoreless first, both teams would light the lamp in the second stanza.

Trenton’s Jake Campbell would break the ice at the 7:51 mark with a power play tally but Wellington answered back when former Golden Hawk Jax Boyer broke in and beat Ethan Taylor at 13:41.

The Dukes were quick off the draw in the third and Jacob Vreugdenhil’s 18th of the campaign just nine seconds into the third gave the visitors their first lead of the hockey game.

While a former Hawk came back to haunt his previous club in Boyer, Dalton Bancroft would victimize his old team at the 8:38 mark of the third as he cashed in on a shorthanded opportunity to even the score at 2-2.

Liam Whitaker and Jonathon Balah would each ring the bar in the late going on clear chances that would have given Wellington a late lead.

In overtime, Aiden MacIntosh would cause a turnover in below the Wellington goal line and a feed to the crease allowed Campbell to put a stick on the puck and deflect the game winner past Ethan Morrow two minutes into the extra session.

“It was a good hockey game with the playoff type atmosphere you would expect,” Smith told the Gazette. “We felt good at the end getting some good looks only to hit the posts and they came back on us. With four regular defenceman out of the lineup and Cole Lavender stepping in and only giving up a pair of goals through regulation in their barn was a great sign the guys were picking up assignments and paying attention to details.”

A night prior,  Wellington tallied five goals in the final ten minutes of the contest in an 8-1 thrashing of the visiting Mississauga Chargers.

Ellias Najem had a goal with just over five minutes left in the third to bust up a Matt Dunsmoor shut out bid.

The Dukes take to the road this weekend, playing in Lindsay on Friday, Trenton on Sunday and Cobourg on Monday.

Wellington’s next home game is Friday March 18 when they host Cobourg for the back end of a home and home set.