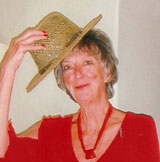 Diane Madeline Attersley-Dulmanis
February 15, 2022
In peace after a valiant, short battle at the Belleville General Hospital, Diane passed away with her husband at her side on Tuesday, February 15, 2022 at the age of 69. Diane is predeceased by her father Russell (1971), her mother Stella (2017) and her siblings Stanley (1999), Edward (2017), and Mary (2017). She is survived by her daughter Ashley (Chris) of Newalla, Oklahoma and her grandchildren Stella Marie, Silas, Sophie, Seren, and Sadie, step daughter Karol (Stephen) of Cherry Valley, her sister-in-law Dorothy, her nieces and nephews Richard (Maureen) , Susan (Andrew), Diane, and her favorite Shane, her great nieces and nephews Emily (Tyler), Ross, Lauren, and Great-great niece Sawyer. Diane, a County girl, was born in Picton. Her life was a grand adventure which took her to Toronto, Montreal, and many wonderful places abroad, before finally settling back in Picton. She was employed as an administrative assistant with Community Living Prince Edward and spent time volunteering with numerous organizations until 2011. Diane was endlessly vivacious with a passionate zest for life. Her mantra was “to make sure that you made at least one person smile a day”. She found the lover of her life, Ivars, with whom she was to have 26 wonderful years with. These were some of her happiest times. As per Diane’s wishes, cremation has taken place. Due to COVID restrictions, the family will announce arrangements at a later date. Memorial donations to the Prince Edward County Memorial Hospital – Back the Build foundation (pecmhf.ca) would be appreciated by the family. Arrangements have been entrusted to Rushnell Funeral Home – Picton Chapel, 33 Main St W, Picton, 613-476-2450. Online condolences can be left at www.rushnellfamilyservices.com