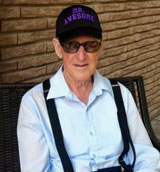 With great sadness we announce the passing of Andrew Nicholas “Andy” Cole.  Andy passed away peacefully at Prince Edward County Memorial Hospital on Friday, March 11, 2022, in his 96th year. Beloved husband of the late Elizabeth Cole (Mann) whom he missed every day since her passing in 2015.  Wonderfully loving, kind and generous father to Rosemary Cole (Wayne), Paul Cole (Lori), and Nancy Banfield (Ken).  Special “Poppy” to Nathan (Brandi), Laura, Kendra (David), Lee, Kevyn, Aprill, and Emma (Justin).   Poppy, to his cherished great grandchildren Jake, Sophie, Harvey, Georgia, Sam, Charlie, and soon-to-arrive baby Cole-Chapman.  Predeceased by his sisters and brothers. Fondly remembered by his many nephews and nieces. Andy dearly loved his family, loving the time he spent with each and every one of them. He was the ultimate fan. Up until last year, “Poppy” rarely missed a hockey or soccer game, and over the years also enjoyed track and field meets and many games of soft/lob ball. Andy was also a dedicated fan of the Picton Pirates and Wellington Dukes. He enjoyed watching hockey so much that whatever game he went to see, that, if he could, he would stay and watch whatever local rep team was on the schedule. Andy was fortunate to live in his home until just last year. He moved to Eldercare Retirement Home in the fall for the last few months of his life. He loved his time there, receiving the best of care and attention. Andy was proud of his ‘county roots’, often sharing memories and adventures of his childhood. Up until last fall, he continued to enjoy drives out to Point Petre where he was born and raised. Andy was also an avid hunter, deer hunting with his brothers and duck hunting at Point Petre. Mr. Cole is resting at the Rushnell Funeral Home – Picton Chapel, 33 Main Street West, Picton (613-476-2450).  Visitation will be held on Sunday, March 20, 2022 from 2-4 p.m.  A Graveside Service will be held at Cherry Valley Cemetery in the Spring.  In lieu of flowers, donations to the Prince Edward County Memorial Hospital or to a local charity of your choice would be appreciated by the family.   Donations or condolences may be forwarded online through www.rushnellfamilyservices.com