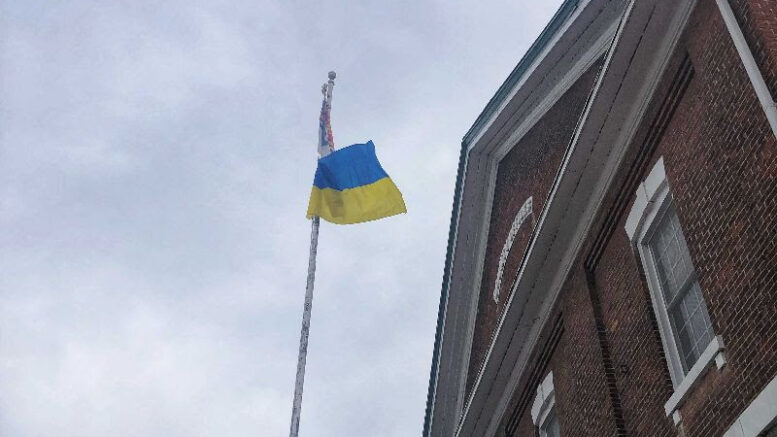 SUPPORT- County Council passed a resolution in support of Ukraine, including monetary aid and support for Russia's war crimes to be investigated by the International Criminal Court (Photo Courtesy of the County of Prince Edward)

During the March 8 Regular Council Meeting, Prince Edward County Council approved a resolution aimed at supporting Ukraine and the Ukrainian community in light of the humanitarian crisis unfolding as a result of the Russian invasion.

The resolution includes a $5,000 matching fund donation to the Ukraine Humanitarian Crisis Appeal organized by the Canadian Red Cross and a challenge to Ontario municipalities to donate as well.

“Like many people across Prince Edward County, I am horrified by the scenes of death and destruction in Ukraine as a result of the recent invasion by Russia. We stand in solidarity with the people of Ukraine during these troubling times,” Mayor Steve Ferguson said. “With raising the Ukrainian flag, we hope to start a broader discussion in our community about how everyone can help the people of Ukraine, especially financially.”

Within the resolution, council also has urged both the federal and provincial governments to work with the required agencies to expedite the resettlement of refugees and streamline the immigration process.

According to a recent press release, the Council resolution also included a clause requesting that the Association of Municipalities Ontario (AMO) and the Federation of Canadian Municipalities (FCM) immediately advocate for strong Canadian support for the International Criminal Court’s decision to investigate alleged war crimes against humanity by the Russians in Ukraine and that similar charges b pursued by the International Court of Justice in The Hague.

Pre-pandemic, in July 2019, the municipality welcomed a delegation of elected Ukrainian officials to Prince Edward County as part of Ukraine: Partnership for Local Economic Development and Democratic Governance. The program was implemented by the Federation of Canadian Municipalities and financed by Global Affairs Canada, with the intent of strengthening local governments and creating a better future for communities in Ukraine.