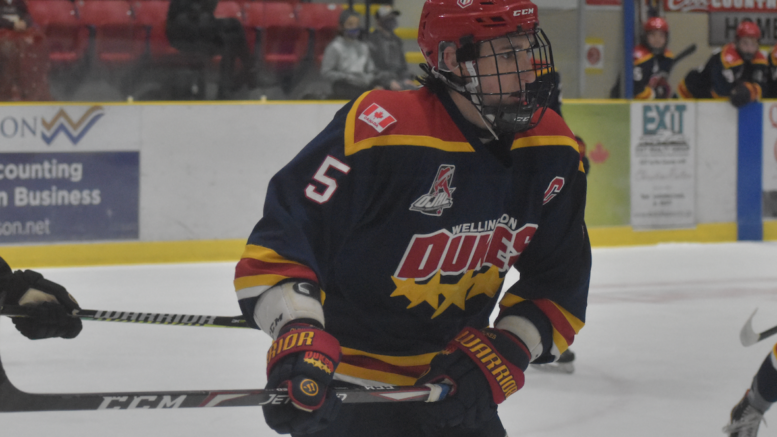 Dukes captain Emmet Pierce had a goal an assist in the club's comeback effort against Lindsay Sunday. (Jason Parks/Gazette Staff)

While they still have a four point game to play against the division leading Trenton Golden Hawks, the Wellington Dukes are going to need some outside help if they are to capture the top seed in the East heading into the 2022 Buckland Cup playoffs.

The Dukes managed to win two out of three road contests this weekend which is typically welcome news at the Ontario Junior Hockey League regular season winds down to a precious few games. 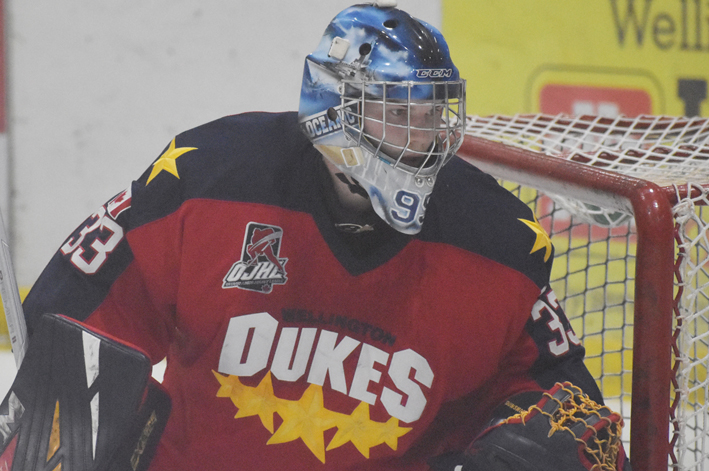 However, the loss at the hands of the host Hawks Sunday night will be a tough pill for the locals to swallow, particularly if the team winds up a point or two behind the Golden Hawks when the dust settles Sunday April 3.

Wellington started off the weekend with a 6-3 win over the host Lindsay Muskies Friday night.

Former Picton Pirate defender Jacob Dietz finally busted into the goal column in the OJHL with his first tally at the 7:09 mark of the first. The Fish would bite back in the latter half of the period as Duncan Scallion set up Nate Burelle at 11:57 and then polished on an individual effort at 16:01 to put the home side up 2-1 after 20 minutes. Early in the second, it was another first as St. Andrew’s College call up Jax Wismer fired home his first of the season to give Wellington equal footing at 1:10.

Captain Emmet Pierce would get the game back to equal footing at 6:28 then set up Graham Dickerson at 11:12 to give Wellington its first two goal lead of the contest. Wismer added his first OJHL assist on the play. Another unassisted Lindsay goal off the stick of Cole Patey at 13:06 moved the contest back to a one goal deficit at 3-3 but David Campbell’s shot at 17:04 while Wellington was enjoying a power play stood up as a crucial piece of insurance. In the third, Wellington skated away from Lindsay as Jaxen Boyer put home his fifth of the season to make the final 6-3. Matt Dunsmoor made 28 saves in preserving the Wellington win.

On Sunday at the Duncan MacDonald Memorial Gardens, Wellington chased the game all evening and were never able to get ahead of the host Hawks. Boyer would score at the 3:19 mark of the second to erase Trenton’s first period lead but Dalton Bancoft’s first of three at the 4:38 mark gave the Hawks a lead they would never relinquish. Aiden MacIntosh scored a shorthanded goal at 12:39 and Bancroft added a power play tally at 17:18. Pierce would get the Dukes back into the game at 17:45 to make it 4-2 but Bancroft’s third was sent into a yawning Wellington cage in the late going of the third to make it a 5-2 final.

The Dukes bounced back on Monday night in Cobourg, shading the Cougars 4-3 in double overtime. The locals might have been worried they were watching another famous Cobourg comeback as the Cougars erased a two goal deficit in the last half of the third. Charlie Da Fonseca scored at the 9:46 mark to the game to 3-2 in favour of the visitors and then Kallaway Mercer had an equalizer with under eight minutes to go in the third. After Dunsmoor made a goal line save in the first overtime, Jacob Vreugdenhil set up Pierce on his hat trick effort two minutes into the 3-on3 session to seal the win for Wellington. Mason Reeves had a first period goal for Wellington.

The Cougars are in Wellington on Friday and then the Dukes travel to Port Credit to take on the Mississauga Chargers on Saturday.