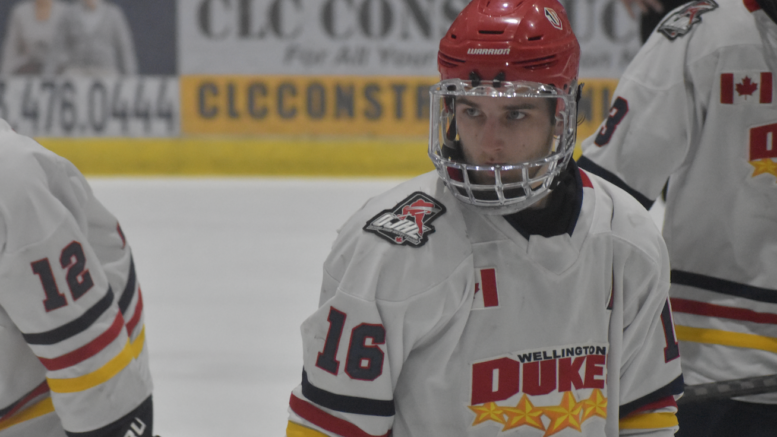 The Wellington Dukes ended the weekend as winners of four straight and have managed to climb into top spot in the Ontario Junior Hockey League’s Eastern Division standings.

And while teams chasing them may have games in hand, the Dukes have wrested control of their own destiny back from the field.

Wellington (31-13-5, 47 points) have a three point spread on Trenton and four point spread on Haliburton County as of Monday. The Golden Hawks have two games in hand on the locals while the Huskies are a single contest behind Wellington. Trenton’s first place hopes were doused with water this weekend as the Golden Hawks lost back to back games against Toronto and Haliburton.

The Dukes play the Huskies twice over the span of their five remaining games- in Minden on Saturday and at Lehigh Arena in the final game of the regular season April 3. The Dukes host Trenton on the preceding Friday evening in a four point affair that will likely go along way in deciding who gets top seed in the division when the OJHL playoffs start the weekend of April 8-10.

Dukes Coach Derek Smith admitted there was still a lot of hockey left and while a regular season division champ was a goal, the ultimate focus of the hockey club at this stage is be playing the game the correct way and staying healthy as the race for the Buckland Cup commences later next month.

“We’re obviously happy with where we are right now and we managed to get control of our own destiny but we’ve got some tough games and we just need to remember the old cliché of taking them one game at a time,” Smith told the Gazette.

Wellington hosts the Toronto Jr. Canadiens on Friday and after the Baby Habs bested Trenton this weekend, the Dukes will be needing a win to stay ahead of the Golden Hawks.

After visiting Minden on Saturday afternoon, the Dukes host Lindsay next Tuesday and then finish at the Lehigh Arena next weekend with the aforementioned set against their Loyalist Parkway rivals and finally Haliburton.

The Dukes kicked off their three-games-in-four-nights stretch in Caledon on Wednesday and managed to double up on the Admirals 4-2.

Twice in the opening two periods the Admirals opened the scoring only to see the Dukes answer back later in the frame.

After Luke Perovic beat Dukes starter Ethan Morrow at 6:09 of the first, Wellington’s captain Emmet Pierce took a Jax Boyer feed and tied the game at the 17:49 mark. 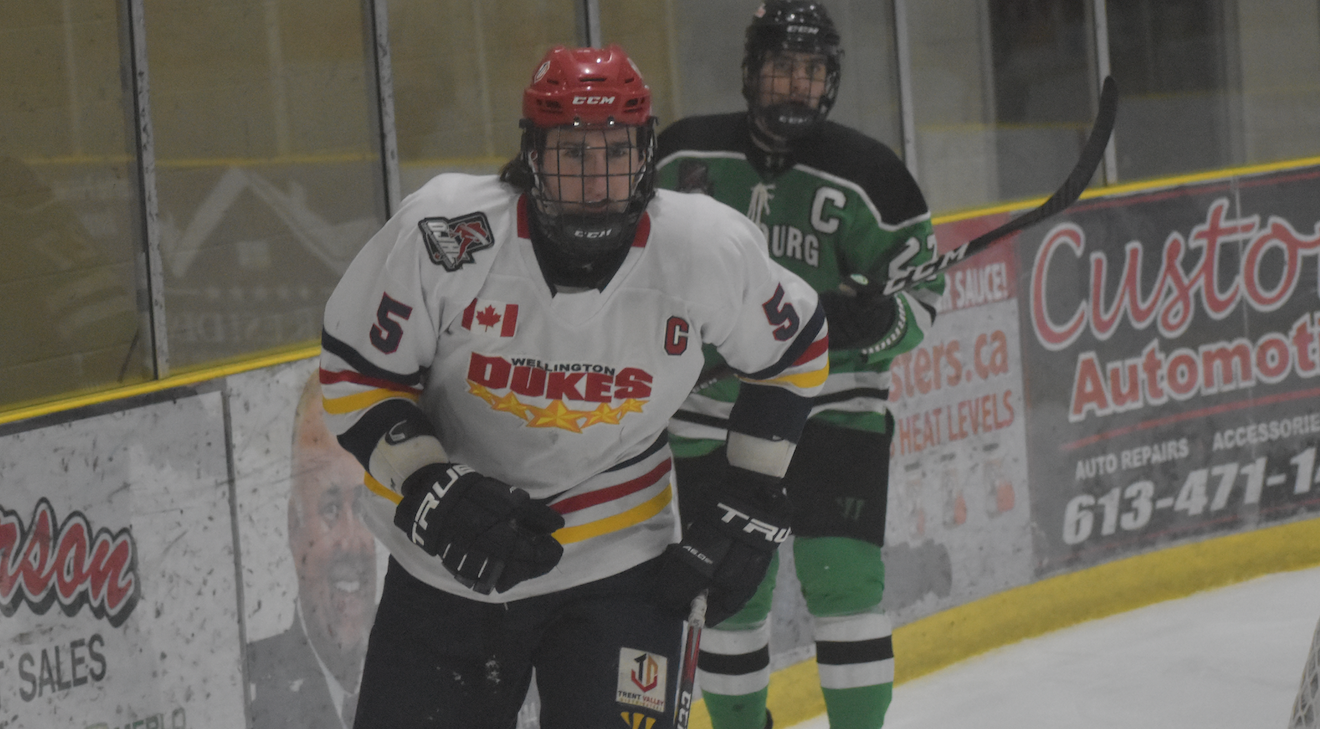 Caledon’s Blake Boudreau would push the hosts ahead at the midway point but Wellington’s quick strike offence has a surprise in store for Admirals net minder Diego D’Alessandro.

The line of Graham Dickerson, Barret John and David Campbell tied the game and then gave the visitors their first lead in the contest, a margin that would not be torn asunder by the Ads.

Dickerson would play trigger man at 14:45 thanks to a Campbell feed to make it 2-2.

Just 49 seconds later, Joynt would bag the game winner with Campbell and Dickerson picking up helpers.

In the third, Morrow was spot on and Pierce’s 35th goal of the season was an unassisted marker into a yawning Caledon cage with 16 seconds left to salt the win away for Wellington.

On Friday, the Dukes needed a workman like effort from all hands to quell the streaking Cobourg Cougars and that’s precisely what Smith’s charges delivered.

The Cougars got an early advantage as George Krotiris was set up by Quinte AAA grad Trevor Hoskin on a 2-on-1 at 1:11 of the first.

But early in the second, Wellington sprang to life as Boyer was able to bat home a rebound off the stick of Alex Case past Justin Easter at 4:11 to square the affair at 1-1.

While there were stretches of ping-pong hockey in this contest, the end of the second didn’t lack for action as Wellington nearly forged ahead with several grade A chances on the power play as the time ticked off the clock.

At the far end of the rink, Quinte AAA midget netminder Brady Spry watched the play as he filled in for starter Matt Dunsmoor. The Wellington goalies were swapped out as Dunsmoor’s skate blade came loose and forced his removal from the playing surface.

In the third with Dunsmoor returning to the Wellington Crease, it was the Duke who would forge ahead but not before testing the iron behind Easter a couple of times early in the stanza.

One of those Dukes shooters that heard the depressing sound of a puck hitting the post and then bouncing harmlessly away was 16-year old Kingston product Will Mitchell.

Mitchell is one of a couple of Dukes true freshmen who have found success this year and it was the Golden Gael’s grad finally getting a stick on a Mason Reeves high slot shot and sliding the disc past a prone Easter at 12:32 of the third.

The Cougars had a couple of chances to tie it but the Wellington defensive corps and Dunsmoor held strong with the Dukes goalie providing a few emphatic fist pumps after the clock hit triple zeros.

On Saturday, the Dukes were one of the OJHL’s most venerable venues in the form of Port Credit Arena to battle the Mississauga Chargers.

With just 15 skaters, the Dukes were able to play the long game on the Chargers as the hosts had little in reserve in a 7-3 Wellington victory.

Pierce opened the scoring at 5:12 but Mississauga would have the solution in the back half of the opening period as Jack Ziliotto scored twice to have the hosts up 2-1 after 20 minutes.

Joynt would tie the game with a nifty shorthanded effort at the 4:29 mark. The Charger margin was restored thanks to Cole Lonsdale at 12:40 but less than a minute later, Pierce would pot his 37th goal to draw the game even at three goals a piece.

The Napanee native has been on a hot streak as of late and has left his coach impressed.

“Emmet has been a leader since day one and having been removed from hockey for 18 months and c coming to a new league, it’s been a process of getting comfortable but now we are staring to see the player we all envisioned when we brought him to Wellington,” Smith said.

Pierce would cap off a hat trick effort in the third and leads the OJHL in goal scoring with 38, two more than Matthew Wilde of Toronto.

Also part of a late, four goal barrage for the Dukes was Joynt with his second of the game and Jacob Verugdenhil with a pair.

The player known as “Ruugie” around the Wellington dressing room lead all scorers with a handful of points and notched his 100th OJHL point in the contest.

“He’s a player that comes in, does all the little things you need to do to make yourself better. He’s a great competitor but he does it honestly,” Smith noted.

In 156 OJHL games, the Belleville native has amassed just 22 minutes in penalties.

Playing in back-to-back night’s Dunsmoor picked up his 13th win of the season.

Smith noted Morrow stayed behind in Wellington as part of a maintenance issue.

“Mo is day-to-day and now is not the time to be pushing our goalies too hard if we can help it,” the coach said. “He should be ready to go this weekend.”