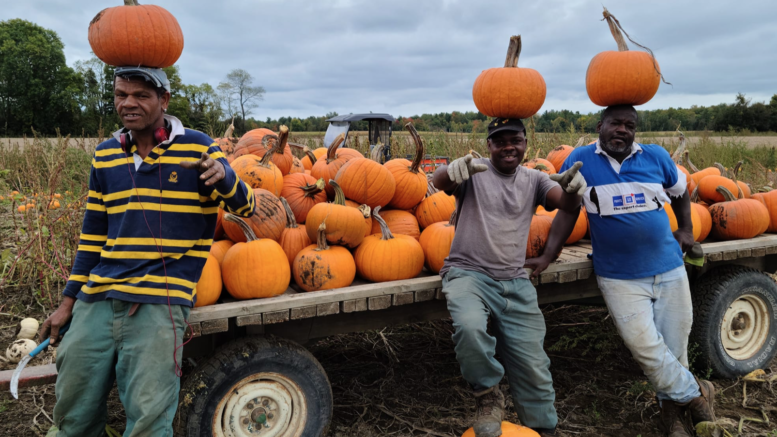 Local Rotarians were provided a broader understanding of the labour force that is a key cog in the machinery that feeds Ontario in the summer time and is vital to several farms in Prince Edward County last week.

As a sixth or seventh generation farmer in the Greater Hamilton/Burlington area, Forth has spent half his life representing farmers to government, other countries and the supreme court of Canada.

“I’ve been lucky that way in some of the diverse things that we’ve been able to do for labour issues in Ontario,” Forth said to the group. “To speak of the worker program, commonly known as the Seasonal Agricultural Worker Program, its part of a multitude of temporary foreign worker programs that are available of the categories, you can’t name an industry in Canada that doesn’t have a foreign worker in it, all the way from Nannies, construction workers, trucking, general labours, the service industry, and the list goes on. There is actually 500 job categories involved by for temporary workers of one kind or another.”

Agriculture is by far the largest accessor of temporary workers and workers from offshore locales have been coming to Canada for employment for over half a century.

In 1966, some fruit growers were in Jamaica and observed high rates unemployment.Returning to Ontario, the ag. leaders lobbied a number of insightful MPs and MPPs involved in agriculture and came up with a pilot program for bringing Jamaican workers to Canada. That year,  264 Jamaican workers were brought to work on fruit crops in Ontario.

“My farm entered the program in 1970 so we’ve been part of the program for 53 years,”expressed Forth. “The program has evolved now into over 20,000 workers coming from the Caribbean and Mexico to Ontario plus another 3,000 – 4,000 that we send to Atlantic Canada. We also administer the program in Atlantic Canada and a little bit in Manitoba. There’s a lot of rules in the program and the basic parameter for the Seasonal Worker program is that it’s an eight month program. You could have workers up to eight months in a window of January 1 to December 15. December 15, every one of them is home, and they can start coming back on January 1.”

The average worker of the SAWP works for 24 weeks on Forth’s farm although that’s a high number of weeks compared to some farms. For example, apple producers typically bring a crew in to just pick apples in the late summer and early fall. Tobacco growers in western Ontario usually only need workers for 10 weeks. The program started as an eight to ten week program and certainly expanded over time with every commodity and horticulture being involved in SAWP.

In Prince Edward County, offshore workers were integral parts of fruit and vegetable growers that produced for local canneries into the late 1980’s. Produce farms that market fruits and vegetables at roadside stands locally still employ Jamaicans and workers from other Caribbean countries while local vineyards offer seasonal work to people from as far away as Thailand.

“A worker typically starts at $15 an hour plus farms pay at least half the airfare to get here and  free housing is provided for the length of their stay and it’s regularly inspected by each public health unit on a seasonal basis,” Forth stated. “There is a lot of oversight in this business, and by oversight I mean government looking over everybody’s shoulders. The program is highly regulated and there’s rules and regulations enforced by the Ministry of Labour,  the Ministry of Health and the Ministry of Agriculture, Food and Rural Affairs in Ontario, the Workplace Insurance and Safety Board, the local Public Health Units, Service Canada and Canadian Immigration so you can see theres a lot of people and usually most of us have two or three audits a year where any one of these agencies comes in and makes sure everything is going right.”

This program has evolved into much more then workers doing farm jobs. Agriculture is very pleased with the workers/people who see opportunities in the positions that they have.

“It’s become much more then just a farm worker program,” said Forth. “These folks have become an intricate part of our farms- without them, horticulture would be a cottage industry today.”

However, the bond between employee and employer goes much deeper than the labour relationship.

“These folks have become close friends of ours on our farms or they’ve become like family on our farms in a lot of cases. They all become a team, the end result is to harvest the crop and to improve the worker’s situation at home. They make between 10 and 20 times what they could ever make at home, if they can even find a job there. And they come back year after year after year because it’s just like anything any of us do, farm work gets in their blood. Some of them come back for years and years and years, we’ve had people on our farm for 35 years sometimes and they’ll always have a job as long as they want it because they helped get the farm to where it is today.”

In a number of Caribbean countries, schooling above the elementary level has to be paid for and Forth explained providing a better life and opportunity for their children or even themsleves is what keeps employees in the SAWP program coming back to Canada year after year.

At the 50th anniversary of the launch of the SAWP pilot program in Jamaica five years ago, the Jamaican arm of the program awarded a fruit worker an award for being part of the program for 46 years. The worker wasn’t able to attend the ceremony in Kingston- he was still taking off a late harvest in Niagara.

“His wife accepted the award on his behalf. They have three children, one of them is a practicing lawyer, one of them is a practicing medical doctor and that education was derived from the work that  that man did on the farms in Niagara. And he also had one nine year old child who hadn’t made it to post-secondary school yet but will have that opportunity because of the work his father does in Canada,” he added.

The FARMS organization was created in 1987 to make the acquiring of offshore workers much easier and liaise with Canada and the various governments.

“I think I’ve filled out forms for 53 years now,” expressed Forth “But we try to assist in the smooth movement of these workers from these countries when the farmer needs them. This is a really good program, it’s really worked well for the farm community and the worker, there’s as much benefit on both sides but it also benefits our local community, our province and Canada otherwise we wouldn’t have the agriculture industry we have today. For people who don’t know it, Ontario is the largest agriculture provider in Canada, it’s also the most diverse and we need to keep it that way.”