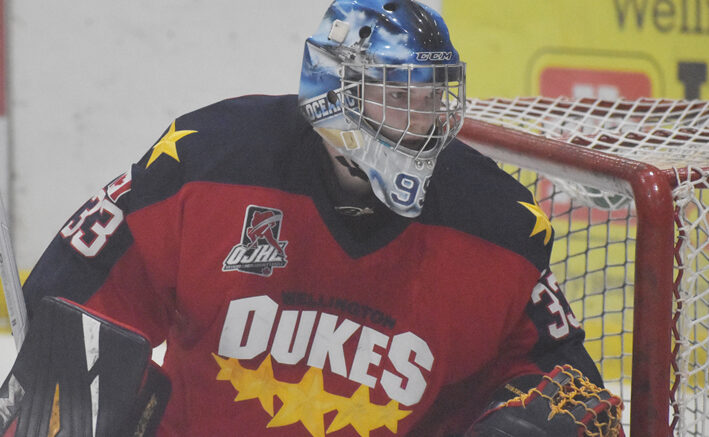 As the 2021-22 Ontario Junior Hockey Season draws to a close, the Wellington Dukes are edging closer to a regular season division title.

But hot on their heels are the arch rival Trenton Golden Hawks and both squads are battling in what will be a photo finish at the tape that marks the end of the most drawn out campaign in Jr A hockey history.

Heading into Tuesday night’s contests- Wellington hosted Lindsay and Trenton was facing St. Mike’s after press time- The Dukes (32-13-6) were in first place in the east with 70 points. The Golden Hawks were two points back but have a game in hand on the locals.

While Wellington suffered an overtime loss at home Friday at the hands of the visiting Toronto Jr. Canadiens, it was a whale of a weekend for the Dukes when it comes to their collective game as the Buckland Cup play downs draw closer.

Just over 12 hours after playing their hearts out against the OJHL leaders, Wellington was on the road to Minden to take on the Haliburton Huskies.

Wellington came out on fire with a blast of determination the likes of which can’t be discounted at this crucial time of year. 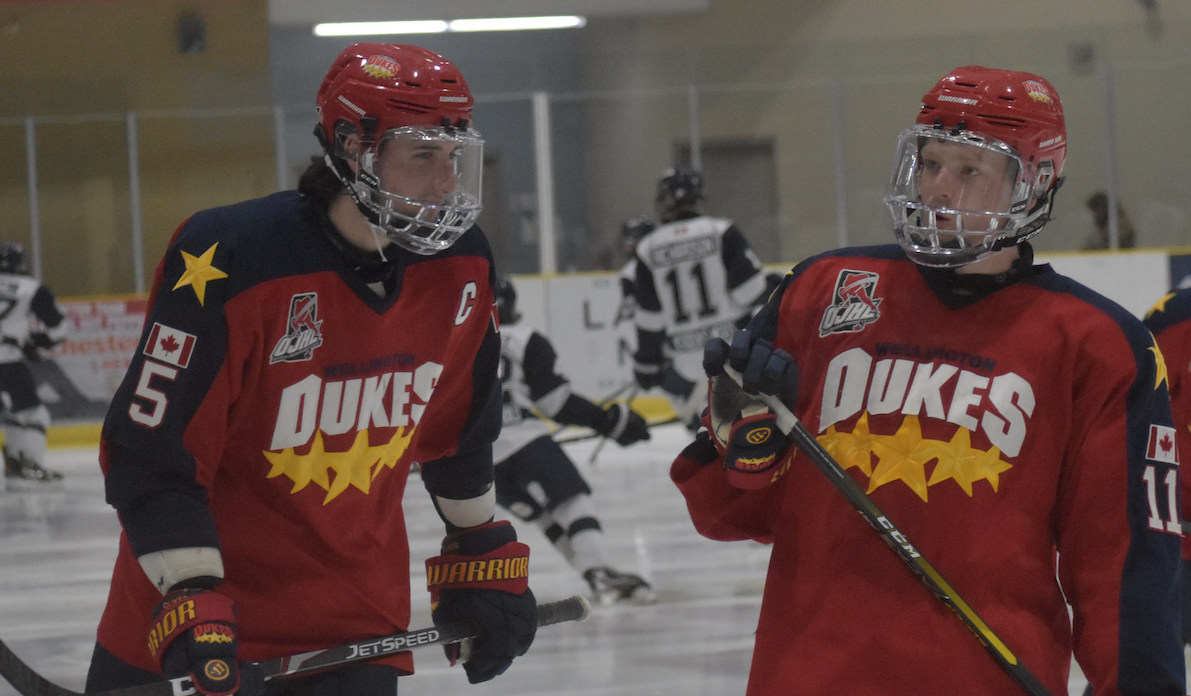 As he has been all season, team captain Emmet Pierce was a force for the locals, scoring a pair while setting up Jacob Vreugdenhil’s game winner in the second period in a 5-2 victory.

“This time of year you need your best to be their best and Emmet have been such a leader and a little bit of everything for us,” Dukes bench boss Derek Smith said. “He’s having such an amazing season.”

The former OHLer has tallied 40 goals and 35 helpers in 51 games this season and the Napanee product should be inline for his share of post season accolades from the league.

Another Duke with Major Junior experience had a huge hand in their regulation tie against Toronto Friday night.

Netminder Matt Dunsmoor made 41 stops on Friday night, and it seemed more than a third of them were of the ten bell variety. The Bracebridge, ON native was simply outstanding in the Wellington crease as he stared down the OJHL’s best squad time and again.

If Dukes fans were looking for signs the “Dunnie” of old was back in town, they saw confirmation that starry pedigree goalie was in his rightful place Friday night.

“It was a tremendous effort for a guy that’s battled hard this year,” Smith said. “There’s no complaints about our goaltending this season and both him and (Ethan Morrow) are dialled in.”

On Friday, Wellington got a first hand look at the Junior Canadiens and it was more than an eyeful. The residents of the OJHL’s highest penthouse didn’t allow the Dukes to touch the puck more than a few brief moments and managed to outshoot the hosts 15-2 over the opening stanza.

But Wellington’s kryptonite was Dunsmoor. The Dukes goalie jumped, bumped, blocked and danced in the blue paint to keep the Junior Canadiens snipers Tyler Fukakusa, Matt Wilde and Christian Catalano off the score sheet.

Wellington had more of a push in the second period and Toronto goalie Selby Warren needed to be sharper as the contest wore on.

Wellington got huge efforts from blueliners such as Liam Whitaker, Jacob Dietz,  Jonathon Balah and Creo Solomon. After Alex Case got the gate for a check from behind in the late stages of the first, Wellington was tasked with facing down the JC’s with just four defencemen.

The clubs battled to overtime where, with just 20 seconds left in the four-on-four portion, Catalano kept and shot on a 2-on-1 rush and picked the corner on Dunsmoor for the contest’s first and only goal.

Shots favoured Toronto 42-20 in the game and that may have been a little kind to the home side.

Wellington was on the road early the next day for a 2:30 p.m. puck drop in Minden but it was the road team taking a bite out of the Huskies in the first as David Campbell and Pierce bulged twine on power plays in the first to stake visitors to a 2-0 lead after 20 minutes.

In the second, Christian Stevens carved into the Wellington lead at the 7:18 mark to make it 2-1 but Verugednhil was set up by Pierce and Campbell for what must have felt like the mother of all dagger goals with just 17 seconds left in the middle stanza.

Wellington carried the momentum into the third period and a Balah blast at 1:12 gave Wellington a nice working margin at 4-2.

Huskies forward Ryan Hall made it interesting with a tally at the midway point of the third by Pierce slammed the door in the face of any Halliburton County uprising with his 40th at the fourteenth minute.

Morrow had 29 saves for the Dukes.

Wellington plays host to Trenton on Friday and in the words of legendary Canadian wrestling announcer the late  Billy ‘Red’ Lyons- “Don’t you dare miss it!”

Wellington wraps up its regular season at home on Sunday afternoon against Haliburton.