Count Canada’s oldest community newspaper in favour of the discussions taking place at Prince Edward Collegiate Institute this week around “What makes a person ‘County’.”

It’s highly unlikely the historical and social consistency of this island community is part of the official Ontario Secondary School curriculum but perhaps the topic of how certain and fresh segments of our community are viewed and treated by those with five generations in the grave yard need to be dissected, examined and understood. And then carefully placed on a shelf where they can collect dust and not momentum.

This isn’t a slam against Prince Edward County heritage or history or the lineage of Loyalists that helped create this community when they settled here amongst the Indigenous peoples and other early settlers back in the 1700’s.

There’s plenty to be proud of when looking back at the heritage of Prince Edward County and at the top of that list is how this community has banded together throughout the centuries to support one another. Remember, during the settlement period and for well over 150 years afterwards, you didn’t survive the early wilds of this near-island without the support of your neighbours-particulary in the midst of brutal winters.

So it’s that enduring and binding secondhand nature of being good Samaritans to the folks down the concession road a lot of people who identify as Loyalists hang on to. Families carried each other through the generations of hard times here and there’s a sentimentality to that.

But where that folksy look back at shared history stops being so quaint and familiar is when people within that cohort treat newcomers with disdain as if they have some kind of moral high ground atop Mount Pious where they can judge-quietly or otherwise- folks arriving from Toronto, Montreal or even parts of the world where a “Canadian Dream” is a safe and welcoming home community far away from war, famine and religious turmoil.

There was a meme making the circles on social media a while back that asked “What do you need to do to fit in the County?” and the common answer among the close minded knuckle draggers was “Be born here.”

Our answer to that question isn’t a bloodline but a County of Prince Edward civic address and a willingness to meet and help your neighbours in both good times and bad.

Just like those Loyalists did so many years ago.

The face of Canada is ever-changing. For further evidence, look at the make up of Canada’s starry National Mens and Womens Soccer Teams. Players who are immigrants or first and second generation Canadians are representing our flag on the international stage and a common thread amongst both squad remains how happy they are Canada accepted their family and how this is an opportunity to pay that acceptance back through sport.

This is Canada at its best and we are becoming a soccer super power because of it.

A cultural mosaic where our differences aren’t a weakness but a strength. Here’s hoping the discussions at our local secondary school about our community make up and the attitudes within is evergreen and drives the development of a welcoming culture that will benefit Prince Edward County for decades to come. 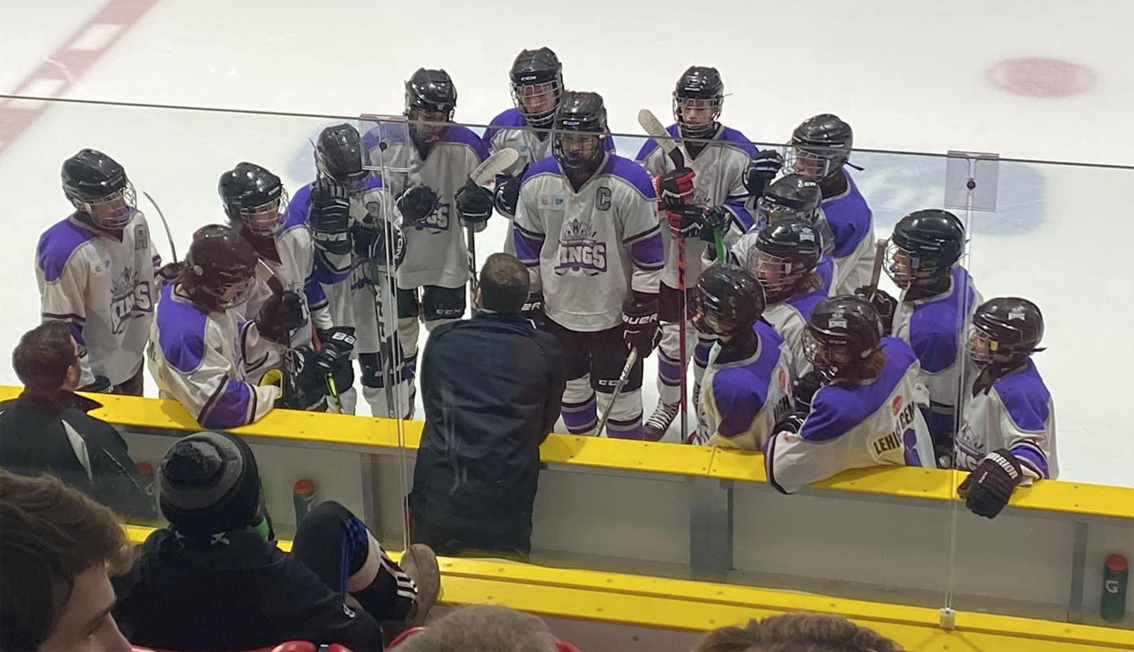 KINGS IN SEARCH OF A RED CROWN Lehigh Cement U15 Kings Head Coach Brant Leggett speaks to his squad during the 2022 Eastern Ontario Minor Hockey League playoffs earlier this month. The Kings went a combined 21-7-4 in 2021-22 and, after besting the Napanee Stars in the final round of playoffs March 21, the club will play in the OMHA Tier 1 Championships this weekend in Barrie. Go Kings GO! (Submitted Photo)