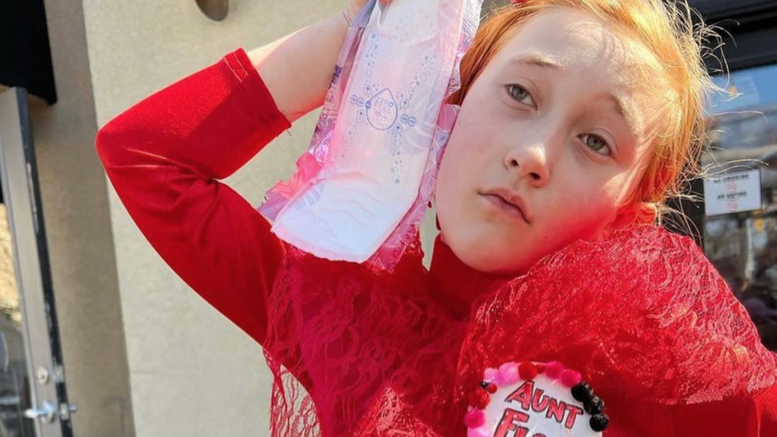 Kelly introduced herself explaining she has been championing this cause for five years.

“In March 2018, I hosted the first period poverty party wherein a group of adults gathered at 555 Brewery to collect menstrual product donations, watch movies and talk about menstrual health,” explained Kelly. “In fall 2019, I sponsored then student trustee Madison Davis motion to provide menstrual products and gender- neutral bathrooms in all HPEDSB Schools.”

Roblin stressed that having easy access to period products is a right, not a privilege.

“Together, we can end period poverty in the county. Having access to period products is a basic human right. More than 800 million people worldwide menstruate daily, yet some cannot get what they need,” expressed Roblin. “According to research by Plan International Canada, in 2019 34 per cent of women and girls in in Canada often had to make budgetary sacrifices in order to afford menstrual products. Can you imagine having to choose between food for your family or period products?”

The deputation to council falls on the heels of a month long period product donation drive put on by Kelly’s Shop, Midtown Brewery and 555 Brewery. All told, over $10,000 worth of period products were raised along with almost $2,000 in cash.

“These products were delivered to schools, Prince Edward Learning Centre, Prince Edward Fitness and Aquatic Centre, the library, Mohawks of the Bay of Quinte and The ROC Youth Centre,” stated Kelly. “Ramona even loaded up her family’s car and recruited a driver so she could deliver products to the Ukraine drop off donation in Belleville. Four coin free menstrual product machines were also purchased and delivered to Prince Edward Collegiate Institute, Athol Elementary School, and C.M.L. Snider Elementary School.

Kelly noted their media coverage was so broad, an agency in Ottawa even requested a donation of products as well.

As Kelly recounted her first period poverty party five years ago, Roblin described a fun and informative time had by all the sixth annual event held on March 6th at 555 Brewery.

“We ate pizza, played games and talked about menstruation in a safe, judgement free place. We also talked about the need for period products in the homeless community, where they’re as basic a need as toilet paper and how homeless shelters and food banks are not often able to meet people’s needs in this regard,” Roblin said, adding that period products are not often on the minds of donors.

“Poverty can lead to people using the same pad or tampon for too long-perhaps days-causing infection or toxic shock syndrome, which can be fatal,” she said. “It can also lead to people making their own period products out of cardboard, toilet paper, newspaper and socks. We are calling on you to help us make period poverty history in Prince Edward County.”

Kelly finished by positing the best indication of the health of a community is how it’s most vulnerable are treated.

“The true health and heart of community can be viewed in how it views it’s most vulnerable and at times marginalized members of society,” she emphasized.

Kelly also noted several Ontario cities, such as Sarnia, Hamilton, Cambridge and London are all exploring sustainable ways to bridge the gaps in access for those in need of menstrual products.

Councillor Kate MacNaughton inquired as to the best way to move forward with this initiative.

Councillor Bill Roberts posed a question to Kelly, wondering if lack of access to menstrual products had tangible effects on local students.

“Just wondering, is there any data to indicate that lack of access to menstrual products may affect absenteeism or participation in school activities?” questioned Roberts.

While the Ontario Government has begun a pilot project to supply each school board with pads, Kelly noted these are limited in number and many students are still leaving school or not coming to school at all due to lack of access to period products.

Councillor Kate MacNaughton put an amendment on the floor that council direct staff to report back on the feasibility of a pilot project to end period poverty by providing menstrual products at community facilities.

The amendment was passed by council.