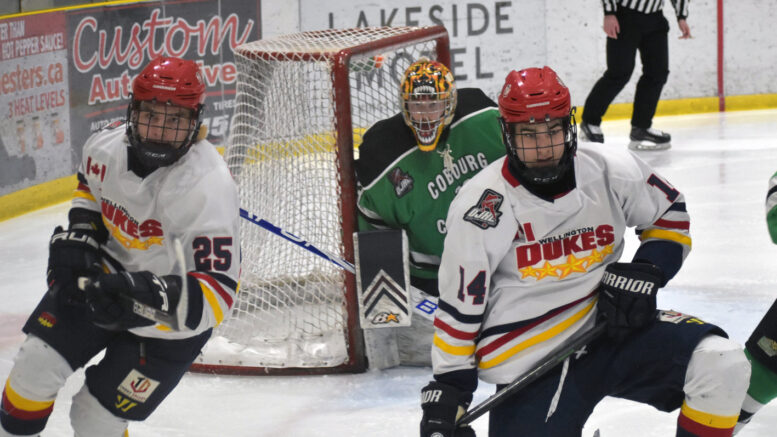 The post-season game of musical chairs derived by the Ontario Junior Hockey League to ensure the completion of a 54 regular season game schedule has stopped with the Wellington Dukes unable to claim a seat.

That’s not to excuse the locals in their two-and-through departure from the 2022 Buckland Cup playoffs at the hands of the Cobourg Cougars but it’s clear, at least talking to those that haunt the Lehigh Arena on game nights that the best two-of-three competitions in the first two rounds of the OJHL playdowns can be safely retired at the end of the current post season.

The Dukes were confounded time and again by the Cougars and net minder Justin Easter. A Burlington native, Easter allowed only two goals in the mini-series and is a big reason why the Wellington Dukes are cleaning out their lockers this week instead of preparing for the winner of the Haliburton County-Trenton series.

After dropping Game 1 3-2 and their post season hopes on the line, Wellington was unable to muster any kind of offence in front of over 1,000 fans at the Cobourg Community Centre on Monday night.

After a scoreless first, the Cougars got all the offence they needed in the first minute of the second period. Adam Barone would beat Wellington starter Ethan Morrow at the 52 second mark to give the Cougars and Easter a lead they could nurse the rest of the contest. Wellington had chances but the Cougar entry coached by Wes Wolfe was a different animal than in seasons past. Hard on the puck in the defensive zone and hard on the defender in the offensive zone during the forecheck that came in waves, the Cougars would actually outshoot the Dukes 22-15 over the final 40 minutes when the Dukes were playing for their post season lives.

Finally, after Easter had kicked everything the Dukes could send his way, Justin Jamer fired a dagger into a vacated Wellington net with 31 seconds left on the clock to send the locals packing.

Not that either of the previous two seasons were Wellington’s fault due to the cancellation of hockey but if you’re keeping track at home, the Dukes have played exactly three home playoff games in three years at Lehigh Arena.

For an organization that prides itself on lengthy playoff runs and operates off the gates that come with them, Wellington finds its self mired in a drought and where that will lead is anyone’s guess.

The Dukes were also tasked with chasing the game in Game 1 as the Cougars got out to a 2-0 lead in the first period Sunday night. Charlie Da Fonseca fired a laser at the 12:59 mark of the first to give the visitors the opening tally.

Then, just over 30 seconds later, Charlie Thompson shovelled a loose puck past Wellington’s Matt Dunsmoor to extend the visitor’s lead to 2-0.

In the second, Wellington would finally respond but even that goal was a process as the Dukes were enjoying a brief 4-on-3 man advantage when David Campbell picked the corner on Easter at the 16:21 mark. Wellington and Dunsmoor got caught looking the wrong way halfway through the third period and it cost them dearly. Looking to his left and preoccupied with a scrum, Dunsmoor was beat in the slot by a wide open Andy Reist at the 11:12 mark to put the Cougars up 3-1.

Wellington was able to get back to within a goal in the late going with the goalie pulled as Jacob Vreugdenhil beat Easter from the slot with just over 90 seconds left but that was, and is, all for Wellington.