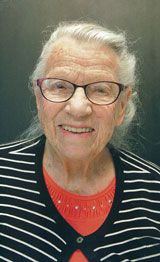 Peacefully entered into rest at Hastings Manor Long Term Care Facility, Belleville on Tuesday, April 19, 2022, Mona Cross (nee Douglas), formerly of Picton died at the age of 100. She was the daughter of the late Donald Douglas and Mabel Baskin and was the wife of the late Willard Cross.  Mona was the loving mother of Sylvia MacCaskill (late Wayne) of St. Andrews, Calvin of Richmond and Alice Jacques (Nolan) of Mississauga and mother-in-law of Carole Cross of St. Catharines. Predeceased by her son Carl. She will be fondly remembered by her 10 grandchildren, 17 great grandchildren and 3 great great grandsons.  Mona is predeceased by her grandson Robert MacCaskill, her brother Philip Douglas (late Goldie) and she will be remembered by her nephew Scott Douglas (Geraldine) and her niece Jill Vauhgan (nee Douglas) (Lee) and many great nephews and nieces. Mrs. Cross rested at the Rushnell Funeral Home – Picton Chapel, 33 Main Street, Picton (613-476-2450) visitation was held on Saturday, April 23, 2022 from 10:30 am until time of Funeral Service in the Chapel at 1 p.m. Interment Glenwood Cemetery, Picton. If desired, donations to Hastings Manor – Residents Fund would be appreciated by the family.  Online condolences at: www.rushnellfamilyservices.com