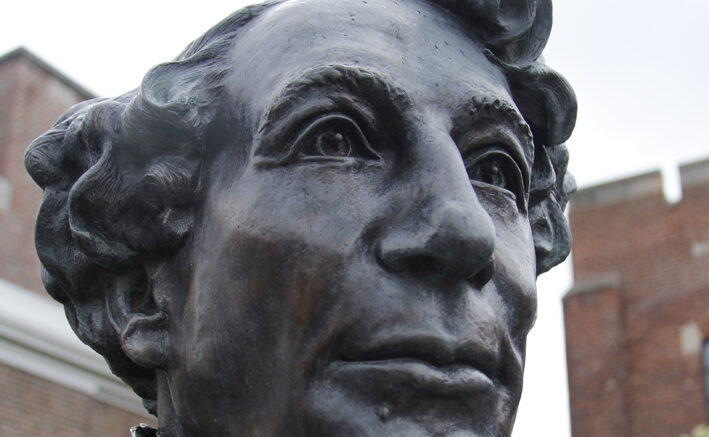 What goes around comes around, especially in the case of controversial statue of Sir John A. Macdonald titled “Holding Court”. After six years on Picton Main Street and one in storage, the contested piece of bronze is being sent back to its donors. Prince Edward County Council voted on April 26th at a Special Council Meeting 11-1 in favour of doing so. Councillor Brad Nieman was the lone dissenting vote.

This recommendation was put forth by Prince Edward County Staff as part of a broader report on a multi-pronged project intended to continue the dialogue around truth and reconciliation that has been sparked by the statue.

The statue was commissioned by the Macdonald Group in 2015 to mark Canada’s bicentennial and was created by Canadian sculptor Ruth Abernethy.

The report, written by Chris Palmer, Supervisor of Museums and Culture Services, noted the decision to return the statue to the donor was made after consultation with the public, potential partners of “The Path Forward” and other interested parties.

“The interactive exhibit would explore the local community’s reckoning with the national tragedy of the Residential School System and through partnership with Tsi Tyónnheht Onkwawén:na Language and Cultural Centre (TTO) and the Gord Downie & Chanie Wenjack Fund encourage further reflection about the process of advancing truth and reconciliation,” wrote Palmer.

Representatives from both Tsi Tyónnheht Onkwawén:na Language and Cultural Centre in Tyendinaga and the Gord Downie and Chanie Wenjack Fund made presentations to council as part of the recent special meeting.

Callie Hill, Executive Director of TTO, noted she was speaking to council on behalf of TTO and not the Mohawks of the Bay of Quinte.

Hill also provided council with some background information about TTO, informing them about the organization and how it was built from a small group of community members in Tyendinaga who realized the critical state of language and culture in that community.

“TTO’s mandate continues to be the revitalization of their way of being in the world, including language, culture, traditions and ceremonies,” explained Hill. “The way we achieve those goals is by conducting annual strategic plan sessions that lead to creative educational opportunities we provide to our community members and others.”

Hill pointed out that TTO has developed and delivered formal education programming, including a Mohawk language based preschool, a primary school and an accredited two year post-secondary certificate in Mohawk language and culture. They have also partnered with Queen’s University and are involved in academic research projects at the University of Victoria.

With regards to The Path Forward, Hill stated TTO, the Downie Wenjack Fund and the County Museums had been liaising for the past year.

“TTO has been involved in collaborations and our model is to take time to build a trusting and healthy relationship before engaging. The relationship between TTO, the County Museums and the Downie Wenjack Fund has been successfully evolving over the last year,” she said. “When TTO was approached by County Museums to consider a collaborative relationship through “The Path Forward”, it was recognized as an opportunity to assist our neighbours in the County to share a fuller story than the one the public had focused on. It’s an opportunity to engage in conversation and show reconciliation in action in our own back yards.”

“John A.’s relationship with Indigenous people is long and complex but I believe we can agree his first awareness of them came from time he spent in this area in 1820s and 1830s. I know there is a fuller story to tell and it’s a part of our shared history,” said Hill. “I believe the proposed exhibit is an opportunity to show the Canadian public what can be accomplished when communities come together to work together and put actions together with words in the spirit of reconciliation.”

Hill also made sure to point out the details of the exhibit had not been decided.

“The exhibit itself is intended to educate and continue a dialogue. It’s a really important conversation that was thrust into mainstream media and was learned for the first time for many Canadians with the discovery of the remains of 215 children in Kamloops B.C. in May of last year,” said Goldsmith.

Goldsmith expressed the importance of remembering the trauma caused by residential schools, especially as this knowledge has been omitted from history teachings for well over 100 years.

“DWF is honoured to be selected to be part of this project so we can use Chanie Wenjack’s story to personalize the stories of the 150,000 children forced to attend residential schools up until 1996. We know in addition to the physical, emotional and sexual abuse that thousands of children died and never returned home,” stated Goldsmith. “This is an extremely important part of our history that often gets left out of our history. Through focusing on education we can acknowledge and uplift those indigenous voices and stories left out of the history books.

Palmer’s report outlines some potential benefit to including the statue in “The Path Forward”.

“The story of the “Holding Court” sculpture would provide visitors with an opportunity to learn why the art was commissioned, the history of Sir John A. Macdonald’s time in Prince Edward County, and how the statue sparked a community conversation around the national reckoning with the legacy of the Residential School System that removed and separated thousands of Indigenous children from their families and communities,” wrote Palmer.

His report also points to community feedback that suggested the statue would be unacceptable unless placed in the broader historical context of colonialism-especially the mistreatment of Indigenous peoples-in Canada.

David Warrick, Chair of the Macdonald Project, spoke in support of removing the statue from storage but was adamant it should not be part of “The Path Forward” exhibition.

“Placing the work in the museum beside the Chanie Wenjack/Gord Downie exhibit and the one from the Mohawks of the Bay of Quinte clearly alters the narrative of John A. Macdonald Holding Court. It places Macdonald on a continuous trial that appears to judge him guilty by association on charges of crimes such as cultural genocide,” said Warrick. “Twenty prime ministers administered the residential schools under the Indian Act. Macdonald did not invent industrial schools, nor residential schools. He was not prime minister when the Indian Act was passed in 1876.”

Warrick also noted an obligation to the donors who enabled the creation of Holding Court.

“The problem is, it’s the history and the obligation we have to the donors for the project. It’s a bicentennial project, not just a knock off…” Warrick bemoaned.

During the meeting, Mayor Steve Ferguson made an amending motion to formally return Holding Court to the donor and that staff prepare a report detailing the outcomes and agreement.