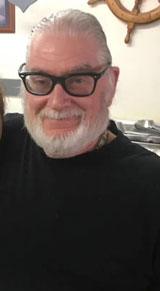 Gregory John “Greg” Howard
Retired Captain & 2nd Generation Proprieter, Schooner’s Fish n’ Chips, Picton
Peacefully entered into rest at Lennox & Addington County General Hospital, Napanee, on Sunday, May 1, 2022. Greg Howard of Deseronto died at the age of 63. He was the son of the late Peter & Joan Howard (nee LaBelle) and was the husband of Mary (nee Hird). Greg was the dad of Mark (Anne), Joanna (Emerson), and Sean (Sandy), and he was the papa of Kaleb, Jayme and the late Tara (surviving Brian). He was the husband of the late Anita (nee Ferguson), Greg was the grandpa of Marlee, Percy, Claire, Aurora, Greyson, Eva, and Ella. He is survived by his sister June Hughes and predeceased by his brother Gary. Greg will be fondly remembered by his nieces, nephews and many friends. Mr. Howard is resting at the Rushnell Funeral Home – Picton Chapel, 33 Main Street, Picton (613-476-2450). In keeping with Greg’s wishes, there will be no visitation or funeral services. Cremation has taken place. If desired, donations to a charity of your choice would be appreciated. Online condolences at: www.rushnellfamilyservices.com