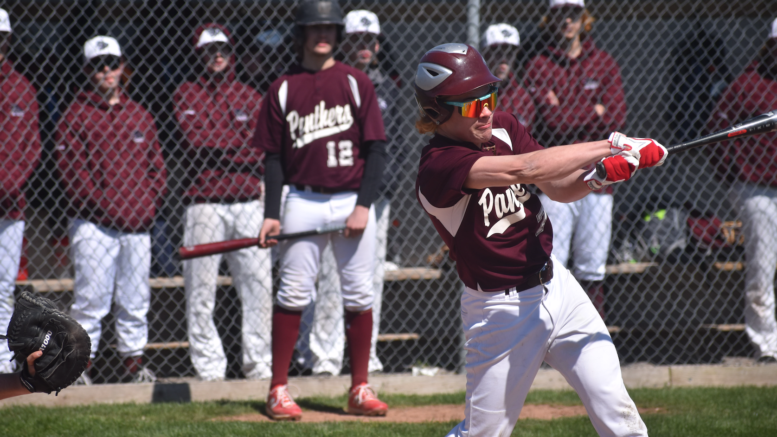 PECI's Charlie Smith belted the first ball in Bay of Quinte play to clear the fences in over a decade at Wellington's Field of Dreams on Thursday. (Jason Parks/Gazette Staff)

PECI Panthers are excited to get a baseball season in after missing the last two seasons due to Covid-19.
The last time the Panthers baseball team played was in 2019 when players like Aiden Reddick, Kacey Cocklin and Trevor Jardine were just freshmen.
Coach Matt Ronan said the return to high school extracurriculars are vital for young people. 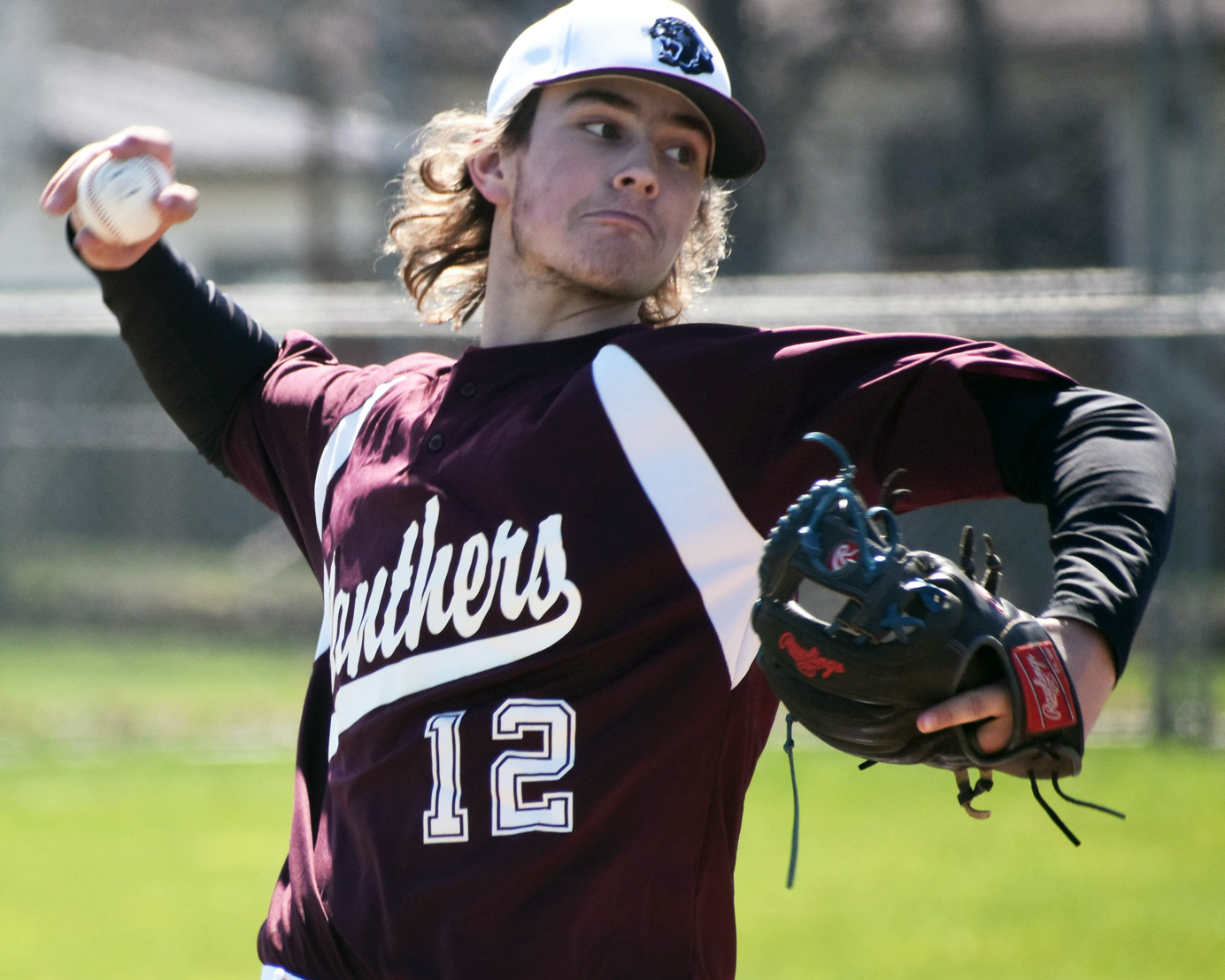 “Think back to your high school experiences, odds are you will think of memories that occurred outside the classroom walls,” the coach said. “While I’m thrilled to see the ball players back, it’s great to see after school events returning. It is such a vital part of overall education and for the last two years, COVID has stripped our young people from acquiring their glory days memories.”
PECI had an impressive start to their season over some lofty opponents.
The club defeated Nicholson and Centre Hastings by scores of 14-4 and 15-2, respectively at the Field of Dreams in Wellington on Thursday.
Coach Ronan admitted there was an aspect of the unknown heading into Bay of Quinte play.
“The last time we got together was March 2020, our current grade 12s were in Grade 9 the last time we played. It was great to see them be so successful and to have fun playing the game. We have a very deep team and we were more than impressed by what we saw out there today,” Ronan enthused. “ We always say that the law of averages will show that the team that has under 2 errors and three walks in a game will win. We threw strikes and challenged hitters to beat us. We played strong defense and finally we put the ball in play. The team that does this the most will come out on top and that’s the players goal- to come out on top.”
A pair of pitchers really set the tone for the Panthers with excellent pitching performances.
Senior Aiden Reddick pitched a shutout 4 inning performance in Game 1 while Jack Martin pitched a three inning, two run gem in the second game.
“The last time we had Aiden in a baseball game was his grade 9 year. He’s matured and is a fantastic leader on this team. His contributions to the team extend far beyond his pitching,” said the coach.
Reddick was overpowering in a 10 strikeout performance. 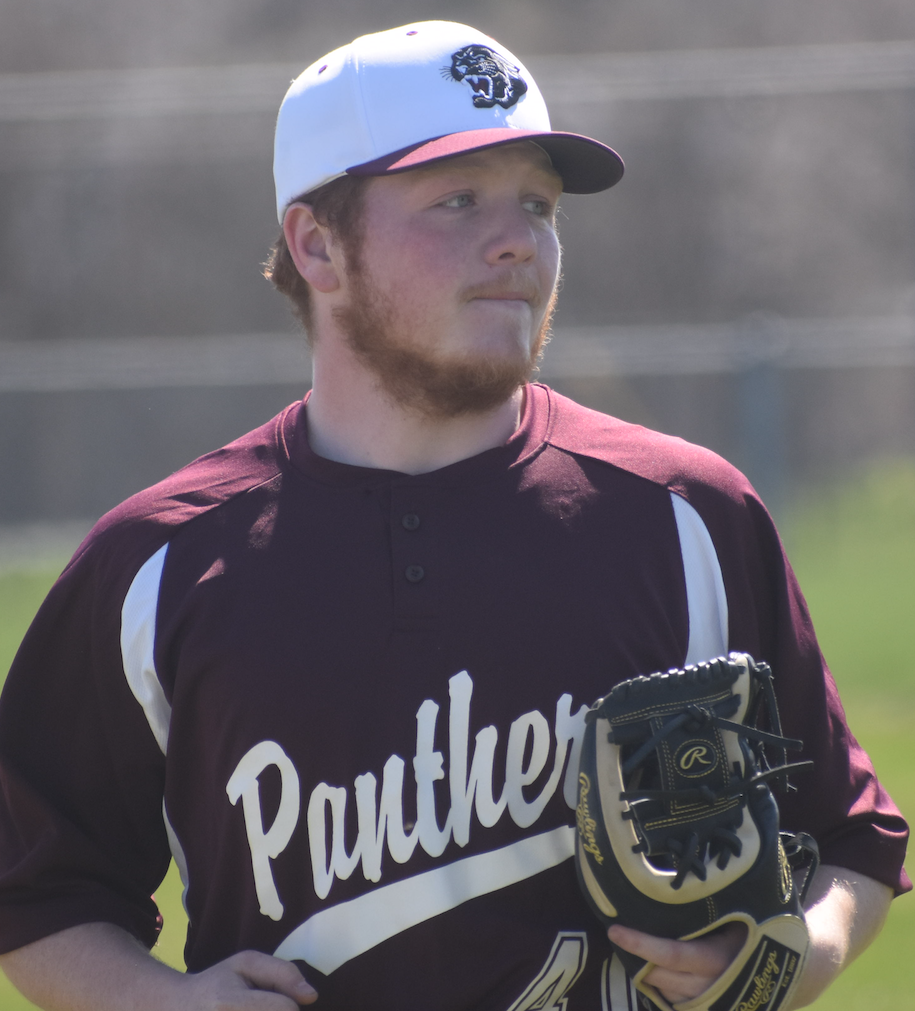 Meanwhile Martin also put on a strong performance.
“Martin is a quiet leader- a true farm boy with a ‘get’er done’ mentality. He is a pleasure to watch and I think he will continue to grow.  He has some great stuff and he’s learning when to use it and where to use it in the count. The sky’s the limit for Jack,” said Ronan
There was also a milestone moment for a Panther slugger.
Grade 10 student athlete Charlie Smith hit the first home run for the Panthers in over a decade, leaving everyone who braved the chilly conditions on Thursday in awe. Ronan included.“Charlie is a big, strong athlete. He was 12 years old the last time he played baseball and to see him hit a home run in a ballpark with major league dimensions was thrilling,” Ronan said. “I keep going back to the glory days theme but its important. He will have this memory for a lifetime. What really impressed me with Charlie was his next at bat. He roped a triple of the centre field fence. He was not going up there swinging for the fences but his smooth, fluid swing mixed with his athleticism gives him his power.”

Smith’s dinger was the first PECI clout to clear the fences in Wellington since Ian Wallwork’s Ruthian blast back in 2010.
Instruction on the finer points of baseball and a heavy practice practice schedule is really paying dividends for the team early in season.
Ronan is bringing years of baseball knowledge and development to an inexperienced Panther ball club and the skipper has a great support cast to go along his expertise.
“Dale Larson is a community coach who has been with us since 2017 and is probably the most knowledgeable hitting coach in the region. He has helped our players immensely. You don’t score 25 runs in two games with the bat on your shoulders. Everything is hit, hit, hit with Dale,” he said.
Adam Smith has also joined the PECI staff this season.
“He has coached for many years in the Lynx system and has a great relationship with the players,” he added.
With a strong opening set of games, hopes are high PECI will again be a factor in the Bay of Quinte and Central Ontario tournaments later this spring.
“If everything continues to develop then I expect our ball club to be very competitive this season. What I have learned from the past is that the teams that go the furthest are the teams that are the deepest.  Our players will continue to work hard so they can all contribute to the team’s success,” the coach stated.
The Panthers are back in action on Thursday when they travel to Rotary Park in Belleville to play the Bayside Red Devils.
First pitch is expected to be at 4 p.m.