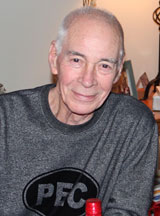 William Robert ‘Bill’ Woods
February 1, 1942 – May 4, 2022
It is with great sadness we announce the passing of Bill Woods, at the age of 80, after a brave and difficult struggle with COPD. Bill enjoyed a lifelong successful career in the printing industry, where he made many friends. After hours, he loved nothing better than shooting pool, having a few beers, and telling stories! He leaves behind his devoted wife Diane, beloved sons Rob, Paul, and Dave as well as his cherished stepchildren Michele (Garry), Mike (Ashley), and Tom (Sheramie). Bill will be missed by his brothers Ron, and Peter (Mary) as well as his nine grandchildren and many nieces and nephews whom he loved dearly. Mr. Woods is resting at the Rushnell Funeral Home – Picton Chapel, 33 Main Street, Picton (613-476-2450). Cremation has taken place. As per Bill’s wishes, there will be no visitation or memorial service. If desired, donations may be made to the Prince Edward County Memorial Hospital Foundation – Back the Build.  Online condolences can be left at: www.rushnellfamilyservices.com