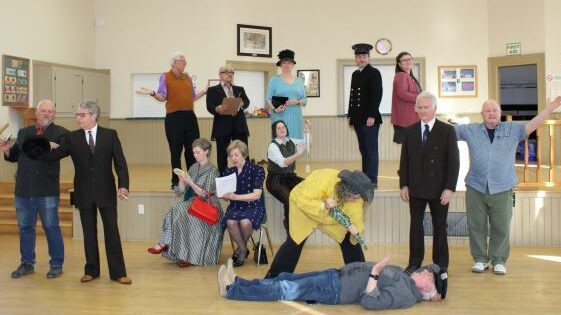 After a two year hiatus, live theatre is once again set to bring life to the stage in Prince Edward County with Radio Suspense Theatre, a play by Steve Cleberg, Directed by Philip Knox and performed by actors from Prince Edward Community Theatre (PECT) and A Theatre Club (ATC).

Founded in 2008, PECT is a non-profit dedicated to providing live community theatre in the County. As per their website, a wide range of volunteers comprise PECT and have a mutual love and passion for the arts. While some members have worked in theatre before, others have not, and all are invited to join.

ATC began during the pandemic when Director and Executive Producer Philip Knox wanted to fill the gap that had been created in people’s lives by isolation and provide some entertainment for everyone  at home.  He formed ATC to record radio plays to be broadcast on 99.3 County FM. The first play recorded was a Norm Foster play provided by the author himself.  Six plays have been recorded since then with the most recent recorded live with an audience at Waring Hall.

As per Deb Smith, choreographer, the two theatre groups decided last winter returning to live performance might soon be a possibility. 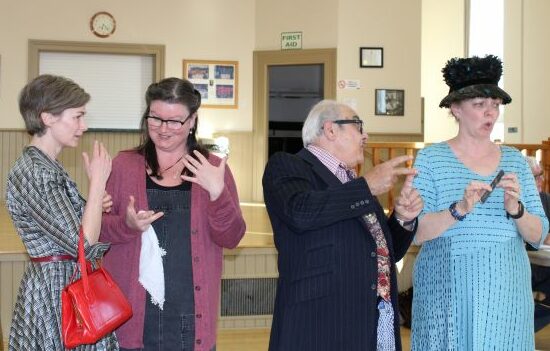 “Last winter, the groups were hopeful that the pandemic was nearing a manageable level, and thoughts turned to reviving live theatre performances.  Director Philip Knox believed that he had an ideal play to bring people together and approached PECT with a proposal to join forces and forge ahead together with Radio Suspense Theatre,” said Smith. “PECT has always performed at the Mount Tabor Playhouse, but together they decided to try the big time and perform at The Regent Theatre in downtown Picton.”

When asked about the inspiration behind performing this particular play, Smith noted it was adapted to weave together the actors’ back stories throughout the play and situate Radio Suspense Theatre in the County, drawing on local characters and places.

“When ATC recorded Radio Suspense Theatre as a radio script last year, Director Phillip Knox knew it would also be a fabulous stage play and he went to work with the writer, Steve Cleberg, on a new version which added more scenes of backstage shenanigans,” Smith noted. “Along the way, the script became ‘The County version’ as locales and characters became Picton and PEC based.”

The play itself is set during 1945, as World War II is winding down. The play promises mystery, intrigue and romance set against the backdrop of the 1940s radio world.

“It’s 1945 and World War II is winding down. CPEC County Radio and The Radio Suspense Theatre Ensemble celebrate the return of Skippy Sawyer as a war hero. A romance between Skippy and Judy, the new girl, begins to develop. In the meantime, a strange woman in a cowboy hat and a raincoat is looking for the GM, Allen Burns. Allen goes missing and then the company has a mystery of its own as they present two new mystery-thrillers,” wrote Director Philip Knox. “Murder in Focus tells the story of a young newlywed who is caught up in a bizarre set of circumstances when she is confronted by her old boyfriend and the news that the infamous “Camera Casanova” has escaped from prison. Are the similarities between the escaped criminal and her new husband too close for comfort? The second mystery thriller of the evening follows a famous actor who abandons his Regent Theatre role as a serial killer in The Picton Strangler to assume the role for real.”

The play will be shown at The Regent Theatre at the following dates and times:

Admission is $30.50 and tickets can be purchased online at : https://www.theregenttheatre.org/buy-tickets