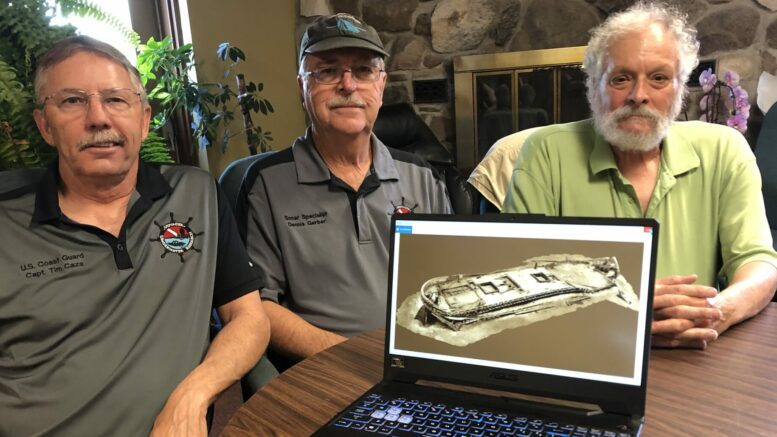 Editor’s note: This story has been updated to include information on the locating, data collection and safekeeping of the artifacts by the Naval Marine Archives in Picton.

The myth of the Marysburgh Vortex- a supposed supernatural phenomena that swallowed ships whole and turned this portion of eastern Lake Ontario into a maritime graveyard- could have some air let out of the famed fable over the next few years.

A union between a Canadian marine archaeologist and historian and a pair of American sonar and Remotely Operated underwater Vehicle (ROV) specialists that have discovered and documented scores of shipwrecks on the south side of the international boundary are teaming up to explore, discover and document known and unknown ship wrecks off the coast of Prince Edward County later this summer.

Deepquest 2 co founder Kenn Feigelman of Kingston and Tim Caza and Dennis Gerber of Voyager Underwater Research from near Syracuse, New York dropped by the Gazette office Saturday to discuss their hopes for the summer of 2022 and show off some of the incredible discoveries the latter pair have documented with their high tech “underwater toys” as the former labeled them.

The North Star was built in Port Dover, ON in 1854 and sank with a full load of coal in eastern Lake Ontario in 1886. It was discovered by Voyager Underwater Research in fall, 2014. (www.sonarguy.com)

The vortex-a supposed triangle of maritime death shaped from Point Petre to Mexico Bay, New York and on to  Wolfe Island that regularly deposited lake-going vessels to the bottom of Lady Lake O makes for great reading but Feigelman explains there’s no such thing.

In the 1800’s, it made sense that otherworldly forces were causing ship’s compasses to be off by 20 degrees, leading wayward skippers away from safe waters and into deadly shoals that would tear timbers apart.

In reality, a ring shaped shoal just 25 feet below the surface is likely due to a meteorite hurtling into the eastern portion of Lake Ontario some 460 million years ago. This cataclysmic collision left a massive magnetic anomaly known as Charity Shoal. The shoal, fortified with iron and other minerals originating high above the earth explains wonky compass readings.

Combine faulty directions from an untrue compass and add wicked weather patterns to strange and powerful currents in the shallower portions of the Lake closer to Prince Edward County and the Kingston area. Throw in a varying degree of quality when it came to ship building in pre-confederation days and you have all the deadly elements that created a easily digestible myth that explains the high amount of death and destruction that dotted this area’s 19th and and early 20th century maritime practice.

A busy practice due to a lack of commercial land transportation and rail in its relative infancy. Coal, pork, fertilizer, grain, salt and all types of raw commodities and market goods were floated back and forth across the lake and these vessels, which numbered in the thousands, nary sailed with an empty cargo hold.

Feigelman figures at minimum, an estimated 450 shipwrecks lay at the bottom of eastern Lake Ontario and only about 20 per cent of those have been located.

And only a portion of those have been documented in the high tech manner which has helped Voyager Underwater Research become a known entity in the maritime world.

“And we are not just talking about transshipment. We are talking about gunboats-American, French and British ships. They are out there somewhere too. Two and three mast schooners, screw driven and paddle wheelers that were steam powered by boilers-they are all there on the bottom of the lake,” Feigelman said, adding that without the generous assistance of Dr. Paul Adamthwaite and the Naval Marine Archives in Picton this ambitious project would be most difficult to carry-out.

“Paul has agreed to complete the relevant government licensing application forms on our behalf  to expedite matters,” said Feigelman. “His knowledge of the local maritime history and the archival resources of his Institution have proven invaluable for my feature articles in County Magazine, as well as in formulating an underwater search-plan.”

All new information and findings, data and GPS locations of discovered wrecks will be provided to the Archives for safekeeping.

Operation Vortex 2022 aims to locate, document and create 3D images of wrecks-known and unknown- in the waters near the municipality.

The parties hooked up when Feigelman was investigating the loss of a ship near Oswego, New York in the late summer of 1919.

The TJ Waffle, a flat bottomed boat built in Westport, Ontario to be a vessel of trade on the Rideau Canal was sold to a shipping company in Kingston and was repurposed (Erroneously according to Feigelman) into transhipping coal across Lake Ontario.

Feigelman learned Caza and Gerber discovered a debris field 20 miles out of Oswego that’s believed to be the TJ Waffle. Through the utilization of a side scan sonar system developed by Garber, the ROV created a 3D movie of the wreck site on the lakebed and computer imaging has helped solve a mystery in the case of the sinking of the steam ship.

In the case of the sinking of the TJ Waffle, it was initially surmised the boat sank due to a boiler explosion. That theory held water as flotsam such as pillows, life jackes, part of a deck house and shattered life boat davits blew into shore near Oswego following the wreck.

But a 3D image of the purported TJ Waffle wreckage crafted through the data gleaned by Voyager Underwater Research shows the boiler in tact, meaning the supposed cause of this particular wreck and many, many others can now be identified.

In all likelihood, the ill formed (for lake-based transhipment, anyway) Waffle was tore apart in heavy weather and ultimately foundered.

“No one could explain why it went down and where it went down after it left Fair Haven, New York with a big load of coal destined for Kingston,” Feigelman explained. “In talking with (Caza and Garber), I learned these guys are extremely good at what they do, they have the latest technology and they know how to find shipwrecks and document them with some of the finest gear available.”

Caza and Gerber didn’t know much about Prince Edward County exactly but their areas of exploration are only a stones throw from the Main Duck and Galoo Islands that straddle the imaginary line that bisects Lake Ontario into Canadian and American halves. 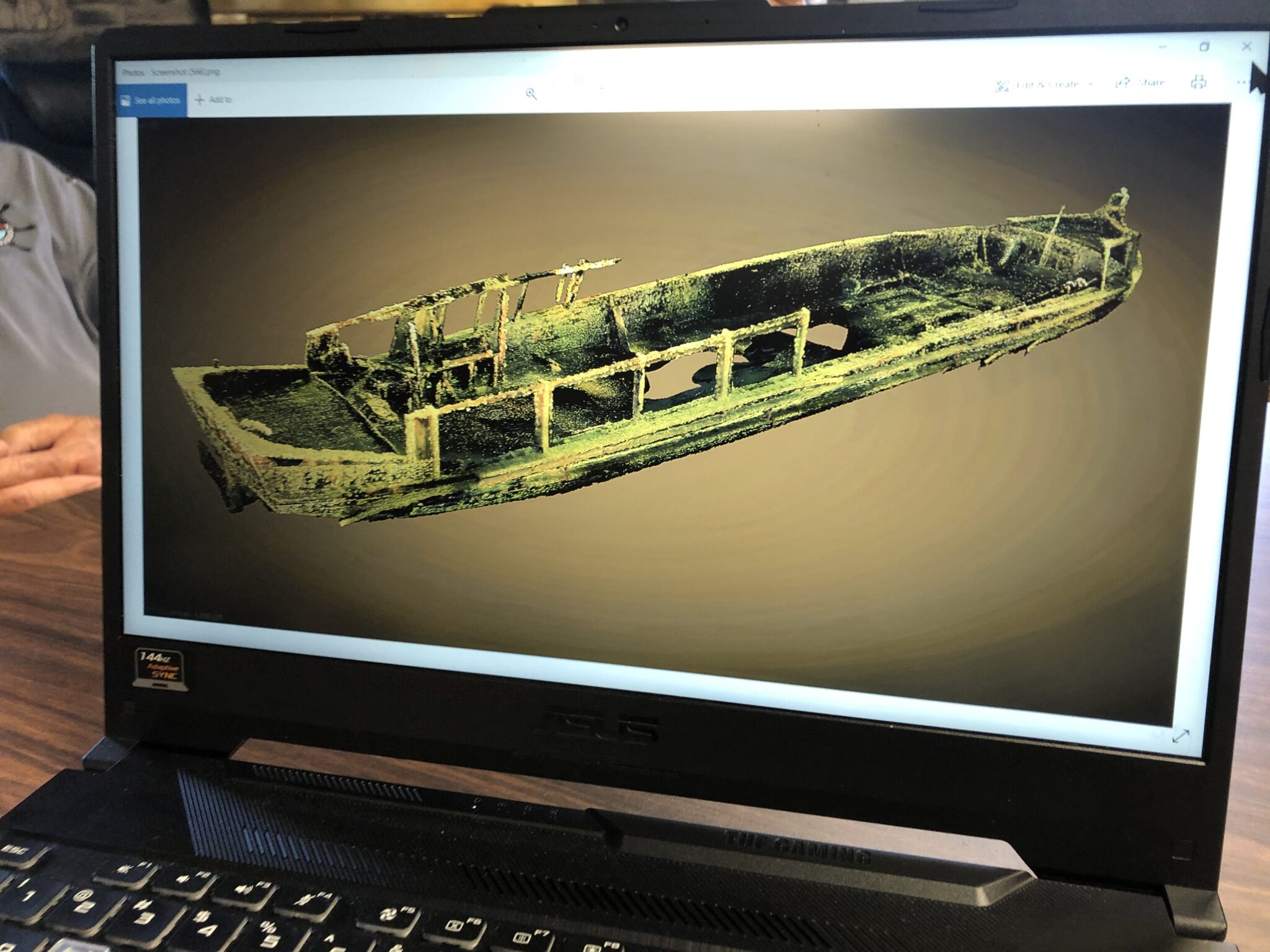 This packet boat once sailed on the Erie Canal and the wreck discovered by Voyager Underwater Research offered the first archaeological evidence of such a craft. (www.sonarguy.com)

“You are doing great work both on Lake Ontario and all the inland lakes such as Oneida and Seneca on your side, let’s get together as a team and go looking for the undiscovered wrecks off Prince Edward County,” Feigelman suggested to Caza and Gerber.

Caza said the incredible emotions of being the first set of eyes to view a previously undiscovered ship wreck at the bottom of a lake is almost indescribable.

“It’s a high for sure,” Caza said. “Since Dennis and I joined up, we’ve been discovering and documenting shipwrecks all over the place and the thrill of the find and discovery is what keeps you coming back and keeps you searching.”

Laws on both sides of the border ensure photographic evidence is the only item taken from the wrecks and Voyager Underwater Research adheres to these strict mandates.

“For us, it’s about survey documentation and offering the public a glimpse because they really don’t have any idea what’s down there,” Caza added. “We are getting all this knowledge and data and it can help us learn about shipwrecks that happened two or three centuries ago and that gives us the biggest thrill.”

Using a grid pattern search which Caza likened to mowing a lawn, Gerber said the latest sonar technology will pick up humps on the bottom of the lake. Those humps are investigated using side scan sonar and, if a wreck is discovered, an ROV will snake its way back and forth over the wreck for an hour or so, taking a 3D movie survey which essentially consists thousands of digital images.

“We photograph every little piece of it and then, with that information, we can use the computer to create a 3D image and that’s the type of cutting edge technology that’s helping us find and then determine which ship is down there,” Gerber said.

Occasionally, it’s harder to find an above water image of a ship that will confirm the wreck’s final resting place rather than the wreck itself.

The work is done in the evening and late at night due to low winds and low boat traffic and often involves 16 hour shifts aboard the Voyager Underwater Research craft.

GPS technology helps ensure the graphing of the lakebed by Voyager Underwater Research is done to the metre and nothing is missed.

The firm has located 26 previously undiscovered wrecks on the American side of Lake Ontario and hopes are high amongst the trio that similar discoveries will be found in the waters of Prince Edward County later this summer.

“We’re hoping to get out 2-3 times this year and survey and see what we can find,” Feigelman said.

“Those first three days will determine how much we can accomplish but we are always at the mercy of the wind and the weather,” Caza added.

Caza admitted he and Gerber initially started this type of exploration as hobbyists on their own time but the recent development in technology and the group’s exponential success in the waters off Oswego and elsewhere in upstate New York in recent years has pushed the group to more prominence.

To expand their searches in the coming years, Operation Vortex will be looking for grants and sponsorships.

“We are very much in the early days of planning and if you love something enough, you find ways to do it but we are hopeful to get the word out there and build interest in what we are searching for and what we will find,” Feigelman said. “We believe this could be a legacy left to our heirs and we are going to find ship wrecks off the County. They are out there waiting to be found and we have the wherewithal to find them.”

Operation Vortex off Prince Edward County is expected to start some time in July.