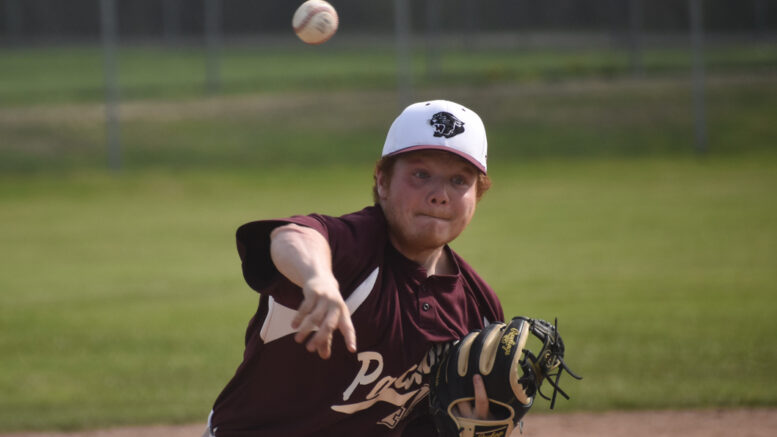 STRONGARM PECI’s Aiden Reddick was dominant in his three innings of work on Thursday, limiting the Eastside Ravens to one hit. (Jason Parks/Gazette Staff)

The PECI Panthers baseball team was back in action last week and put their undefeated season on the line against the Eastside Ravens.

It was a great game all the way through until the bottom of the 4th inning where three errors made by Panther defenders led to the game’s first run.

The Panthers ended up losing the game 2-0 but overall put up a solid fight and battled right until the end.

“I was really impressed with the Eastside team. They are well-coached and they have a lot of experienced ballplayers,” PECI Skipper Matt Ronan said afterwards. “I think we all expected a better battle but when you have 15 of 18 outs as strikeouts you’re not putting yourself in a position to win. I am hopeful we will play them again this season.”

The Panthers brought out their big guns in the game as senior Aiden Reddick took the mound to start the game and ended up having an impressive performance, shutting out the Ravens through three innings of work.

Jack Martin came in after and worked from the fourth to the sixth, giving up two runs, however neither run was earned as the Panthers defence let him down. On the other side of the hill, Ravens pitcher Maddox Shaver started the game for the opposing side and was bringing the heat to the Panthers lineup as he mowed everyone down for four shut out, shut down innings.

The coach praised the efforts of Reddick and Martin.

“Pitching wins games. Aiden and Jack have done an outstanding job. They throw strikes and they challenge hitters to beat them. They are two of the three most dominant pitchers in the region. We have a lot of pitchers and a short season so in some ways we have given other pitchers the opportunities that are available if they play a longer season,” Ronan said.

The Panthers came into the game feeling very excited and engaged with the prospect of playing to protect their undefeated season. However were they possibly too cocky and arrogant heading into the game? Ronan explained that wasn’t the case.

“I appreciate our confidence. You play with confidence but you lose with arrogance. I don’t think we were arrogant but I don’t think we have dealt with adversity like that until we faced Eastside. I loved that we battled back and had bases loaded and the winning run on first base at the end of the game. We did not quit,” said the coach. With an extremely deep and versatile team, Ronan had to make some tough decisions regarding the lineup. Ronan had some veterans who were playing very well but were taken out of the lineup in favour of some younger players. “The team has so many good players sometimes the matchups favour some different players even if on paper it doesn’t make much sense. The skipper said. “Building the starting lineup is something that the coaching staff take seriously. Sometimes we make the right decisions and sometimes we don’t. However, we know that all 18 players can’t play at the same time and that we agreed as a team that playing time is not guaranteed no matter what grade you’re in. I am impressed with our team and I know all 18 want to play and are hungry to prove themselves.”

Up next on the Panthers schedule they have Bay Of Quinte Championships Wednesday. The Panthers are scheduled to take on the Bayside Red Devils in semi final action at 12 at the Melrose Diamonds. The other semi final game is The Eastside Ravens vs the St.Theresa Titans. The Panthers are hoping to defeat the Red Devils and advance to the finals. The two teams that advance to the finals will make it to the next championships, COSSA.

“Pitching and defense wins games. We made a lot of errors against Eastside and our pitchers gave up two unearned runs. We need to come ready to play and challenge ourselves by wanting the opportunities when they present themselves. We need to want the ball to be hit to us, want to be at bat in a critical situation. If we have the right mindset I believe we will put ourselves in a better situation to win. The talent is there,” he added.