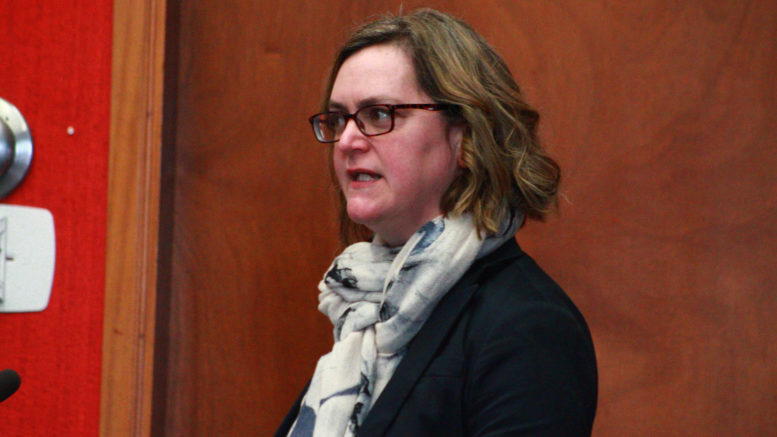 A report from the municipal Community Services, Programs and Initiatives Department detailing changes to the Short-Term Accommodations (STA) Licensing Bylaw came before the Committee of the Whole on May 12th. The report, and ensuing discussions, will inform the final bylaw to come before council on June 21st.

Emily Cowan, Director of Community Services, Programs and Initiatives spoke to the committee to explain the proposed changes and field questions.

“Basically, staff are recommending a cap of zero on all future STA licenses, except for owner occupied STAs and fully accessible STAs as whole home STAs, having up to three active licenses at any time period,” said Cowan. “Those accessible STAs could not operate in R3 or R4 zones.”

When asked by Councillor Andreas Bolik to clarify the importance of R3 AND R4 zones, Cowan explained these zones will be important for future generation of affordable/attainable housing.

“R3 is for mixed type housing, townhouses, apartments, semi-detached, tri plexes…these are considered to be more affordable and attainable,” she said. “A lot of new housing being developed are in R3 zones, so we’re trying to protect these areas from being used for STAs.”

Cowan added that R4 is the newest zone, with provisions that will allow for builds on smaller lots.

As part of the proposed bylaw changes, staff also recommend STA licenses should only be awarded to “natural persons” as opposed to corporations. Staff also recommend penalties be imposed for those STA owners who do not post their license number on advertisements.

“Once these motions are carried, that will be available to the public and we’ll likely consult with stakeholders again so the draft bylaws are available for everyone to look at and we can make sure we don’t have any unintended consequences with, hopefully, this last round of changes to the STA bylaw,” stated Cowan.

The only comment from the public regarding this report came from Matt Pennick, local business owner and board member of the Licensed Short-Term Accommodators of Prince Edward County (LSTAPEC).

Pennick argued there are numerous reasons why someone would choose to operate using the name of a corporation.

“There are many operators who choose to hold an STA in the name of a corporation for a number of reasons, including protecting themselves from being personally liable should an accident occur,” he said. “In addition, more people work from home these days, so their principal residence could be under the name of a corporation while they use a portion of it as an STA. If the County’s concern is to have a cap of one STA per license owner-occupied residence, whether in a person or corporate name, we should create a bylaw for that reason.”

Councillor Kate MacNaughton inquired as to when it might be possible to revisit the penalty amounts suggest for STA owners who fail to advertise with their license number.

“Where would be the right opportunity to look at how to fine tune those amounts, so we’re really dissuading what we’re intending to and simply reminding those who’ve simply made a clerical issue?” she asked.

Cowan confirmed the comments from the committee as well as any upcoming stakeholder/public meetings would be used to gather consensus regarding what is considered to be a fair amount for the penalties.

“Really, what we’re trying to stop is people advertising STAs that are not licensed,” commented Cowan.

Similar to Pennick, Councillor John Hirsch inquired as to the difference in liability for corporations versus a “natural person”.

Cowan suggested that, given the host of provisions being recommended by staff, it might be a “moot point” to worry about whether the STA is listed under a corporation or not.

“There are obvious benefits to an STA being structured as a corporation. I’m not an insurance expert, however I feel the rest of the provisions we’re looking to add to the STA bylaw somewhat negate the issue altogether, if we are not providing new licenses or new whole home licenses, then maybe it’s a moot point to worry if they’re natural persons or corporations,” she said.

Cowan added they will conduct a “more deep dive” of the insurance ramifications for corporations versus “natural persons”.

Councillor Ernie Margetson posed a question regarding the possibility of an individual owning multiple STAs as a corporation.

Again, Cowan reiterated that if the municipality ceases to issue whole-home STA licenses, then that problem will become irrelevant.

“If we are not issuing any whole home STA licenses, I’m not sure how deep we need to go in that regard,” she said. “I am going to say that a grandfathered STA, when sold, can legally still be used as an STA because it’s rooted in the zoning bylaw. However, the STA eligibility provisions will now be in the STA bylaw, so there are now eligibility provisions the new owner might not comply with…it’s not a direct re-license.”