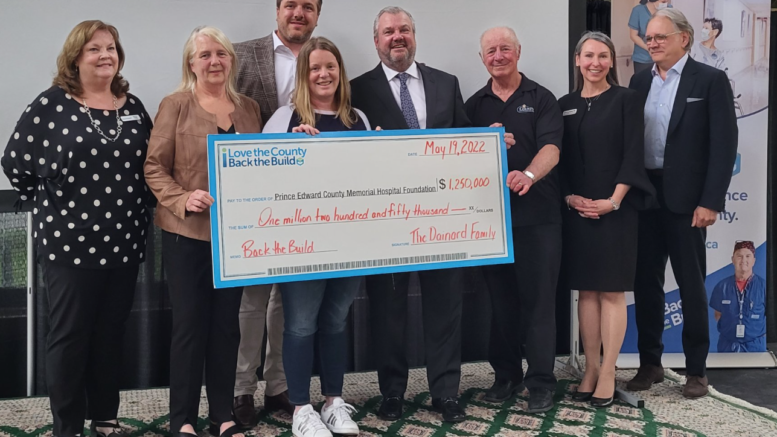 The Dainard family presented a $1.25 million gift to the Back the Build campaign Thursday. (PECMH Foundation photo)

The love shown by this community for its healthcare institutions and the people who serve within the Prince Edward County’s House of Healing -both current and forthcoming- is the reason the original goal of the Back the Build Campaign has been obliterated.

And a new goal announced.

On Thursday afternoon, nearly 16 years to the day in the same place where then-Minister of Health George Smitherman told hundreds of worried but committed Prince Edward County residents that Prince Edward County Memorial Hospital has a “bright future” and, in the mean time,  the government was providing funding that would allow Quinte Health Care to start the business case for a new hospital to serve the citizenry of the county.

With that future here and now and a new PECMH firmly gleaming on the horizon, the Foundation that gathers funding for the both the community’s instalment of the  new build and the cost of the capital medical equipment that will fill our “House of Healing 2.0” and make it a top tier installation that offer both acute, complex and diagnostic needs of patients from all over the Qunite area.

As the old saying goes, one down and one to go.

The Foundation announced the Back the Build campaign for a new hospital in Prince Edward County has surpassed its fundraising goal– but the campaign isn’t finished.

At a special celebratory event  PECMHF’s Board of Directors and Campaign Cabinet members announced a total of $20.7 million has been raised for the new hospital build, eclipsing the original $16.5 million goal.

Rumination for a new hospital got underway in 2014 when the QHC board announced a new PECMH would be their number one capital priority goal and aBack the Build public launch was announced four years later.

The campaign cabinet and the fundraising team hit the ground running, eager to ensure that when it came to Prince Edward County’s portion, the funds were in reach should anyone in the Ministry of Health and Longterm Care’s capital branch ever made a quick phone call to Picton and query the level of support the project had in the public.

The Foundation’s news on Thursday confirmed what has been evident in the community for generations- PECMH is a cause worth fighting for and protecting above all else.

“The Prince Edward County Memorial Hospital Foundation fundraises to advance health care for every resident and visitor in this community,” said Shannon Coull, executive director of the PECMH Foundation. “We are grateful to each and every donor who has helped us raise$20.7 million in cash and pledges. Surpassing the community share of $16.5 million toward the new build was not something we could have ever accomplished without the support of this generous community. We – the team at PECMHF, the campaign cabinet, our partners and donors are ensuring the future of health care delivery in Prince Edward County is vibrant and exceptional.”

The $20.7 million covers the local share of the new hospital build, set out by the Ministry. This funding requirement includes 10 per cent of the hard construction costs for the new hospital. Chief of the Mohawks of the Bay of Quinte Donald R. Maracle was one of several local dignitaries on hand at Thursday’s event. Chief Maracle mentioned PECMH was his people’s hospital of choice and appreciated the kindness and compassion shown when they attend PECMH. (PECMH Foundation photo)

The funds raised in addition to the $16.5M account for the rise in building costs, inflation, increased infection control measures, environmental sustainability enhancements and an increase in services.

“More than 2,400 corporate and individual donors invested in Back the Build’s promise to build a new hospital in The County. These donors contributed over 5,030 gifts. The total of their generosity is a reflection of the quality of this community of supporters,” said Dennis Darby, Back the Build campaign co-chairperson and director on the PECMHF Board. “We’re grateful to the entire community for coming together; volunteers, donors, businesses big and small, service clubs. Donors should never underestimate the impact they have. Every gift, no matter the size, has brought us to where we are today and every donor brings our community closer together.”

New donors to PECMHF, Rick and Debbie Dainard, were present with their children Tanya and Michael to announce their $1.25 million gift to Back the Build. This gift, and other significant pledges like this, helped PECMHF reach the $20.7 million in commitments raised.

“Debbie and I are proud to support our community in the construction and equipping of the new Prince Edward County Memorial Hospital, the first hospital to be built in The County in over 60 years,” said Dainard. “We are excited to give back to the community and make this financial donation which will help to ensure that the highest quality of health care is available when it is needed most. We know this gift has a meaningful impact and hope it inspires others to step forward to support the next phase of the campaign.”

With the fulfillment of the local share requirement for the hospital build, PECMHF will now focus its efforts on the major equipment needed. The team announced that they will be raising $6 million over the next five years.

The building portion is in place. Now the goal shifts to ensuring PECMH has all the latest and greatest healthcare technology that will serve a plethora of patients for years to come.

New money raised will be earmarked for leading edge medical equipment, including the possibility of a Computerized Tomography (CT) Scanner. The funds will also help support environmental sustainability enhancements.

“As a result of the pandemic, our hospital system has experienced a significant increase in pressure on our staff and services, compelling us to view healthcare delivery through a new lens – one that reinforces the importance of care close to home, and places infection control practices at the forefront,” said Stacey Daub, President and CEO, Quinte Health Care. “As a result, we are shifting course in our planning of the new PECMH to increase square footage to allow for new standards around infection control, and to accommodate 20 inpatient beds instead of the proposed 18. We are also pleased to confirm that we have been approved for a new CT Scanner, a service not currently offered at PECMH. These enhancements, in addition to sustainability features and smart technology will truly make for a state-of-the-art PECMH.”

“One of the great benefits of having an ultra-modern hospital in Prince Edward County is we can find new ways of enhancing patient care such as being able to offer expanded services like access to a CT Scanner,” said Nancy Parks, Back the Build campaign co-chairperson. “The way the hospital staff, campaign cabinet volunteers and community step up to support this campaign never ceases to amaze me. Those who have donated to help Back the Build are touching everyone in this community – from children to the elderly. Now, with our new goal identified, we are hoping those who have not had an opportunity to contribute to the campaign, will step forward and become part of this incredible dream.”

PECMH Foundation’s Back the Build campaign is the largest fundraising effort undertaken by the organization in its almost 37-year history. While the heart and soul of the current County hospital is thriving, the physical structure is nearing the end of its ability to meet today’s standards of medical care. After over 60 years in service, the time for a new hospital is now.

The new QHC PECMH is on track to open in 2027 with shovels projected to go into the ground in 2024.

“Building a new hospital is extremely involved and dynamic. There are so many moving parts that are all necessary so the project continues to move forward. The community’s confidence and continued support in this project has been critical,” said Coull. “It was clear from the start that this community is incredibly supportive of their hospital. Every single contribution is important. Whether it’s $10 or one million, we appreciate the community support toward this next phase of our campaign. It’s our hospital. It’s our legacy.”

Those interested in making a donation can do so by visiting PECMHF’s newly redeveloped website at www.pecmhf.ca. Cheques can also be mailed to PECMH Foundation, 403 Main Street, Picton, ON K0K 2T0, and those with further inquires may direct them to 613-476-1008 ext. 4502.