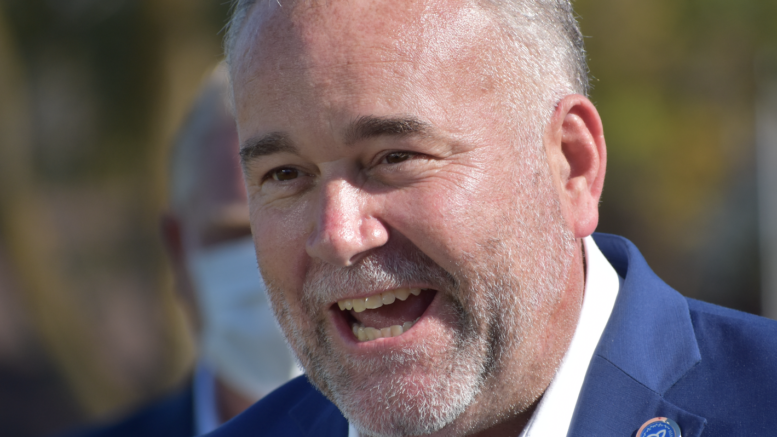 I grew up in Riverview, N.B. and moved to the Quinte region to attend Loyalist College in the radio journalism program. After graduation, I spent 16 years working at Quinte Broadcasting, many as news director. I made great connections within our community during that time.

In 2011, I successfully ran to become MPP for Prince Edward-Hastings. I was re-elected in 2014. In opposition, I had several critic roles including energy, natural resources and forestry, and small business and red tape reduction.

In 2018, I became the first MPP for Bay of Quinte. As part of the Ford government, I have served as Government House Leader, Minister of Economic Development Job Creation and Trade, Minister of Children, Community and Social Services and Minister of Energy.

What made you decide to re-enter the race to be MPP of Bay of Quinte?

We’re making great progress on health care, housing, infrastructure, and job creation and I’d like to continue the work on behalf of my community.

Why is your party the right choice for Bay of Quinte?

Our government has stabilized the funding formula, allowing all four QHC hospitals to be on sound footing.

We are getting closer to building a new Prince Edward County Memorial Hospital. After years of inaction, we are building four modern long-term care homes, including two redevelopments in the County at H.J. McFarland and Hallowell House. They, and all homes, will provide four hours of average daily care by 2025. We also delivered a 300-seat standalone nursing school at Loyalist College, accelerated PSW programs in the region, and 50 new medical school seats at Queen’s University. We know that health-care workers make personal and professional connections early in their career, so having these programs in Bay of Quinte will help with the attraction and retention of health-care workers.

Despite the pandemic, we have seen record number of housing starts and new rental units and we have had over 500,000 net new jobs across the Province. We are focusing on developing the skilled workforce necessary to grow our local economy by promoting careers in the trades in schools, the Ontario Youth Apprenticeship program, and various skills training programs in partnership with Loyalist College and local employers. The government is also investing over $4 billion to upgrade high-speed broadband Internet across Ontario and it has collaborated with the Eastern Ontario Regional Network to fix gaps in cellular services. We are committed to widening Hwy 401 and examining the redesign and creation of interchanges locally – including the BEAR in Belleville – to promote safety and to help advance economic development locally.

Our party is also committed to preserving the County’s South Shore with the first new conservation reserve in Ontario since 1999. We have stopped the out-of-control energy increases and we will continue to fight to make life more affordable by lowering provincial fees and taxes, like licence plate fees and the gas tax. Our $3 billion Social Services Relief Fund has helped local service providers like PELASS and the agencies they support address issues like food security, homelessness and affordability. We’re also committed to raising ODSP rates by five per cent initially, then tying successive increases to inflation. We’ve made the difficult decisions to bring the Province through challenging times these past few years and we’ve shown a willingness to work across party lines with the federal government to deliver through the Safe Restart Agreement, the Investing in Canada Infrastructure Program, and the recent childcare deal. With my personal experience as a cabinet minister these past four years, I have already made strong connections at Queen’s Park. The polls suggest another Progressive Conservative government is within reach.

I can ensure that Bay of Quinte’s voice is heard in the decision-making process.

What would you say are the top three issues facing Bay of Quinte right now?

Affordability, housing, and human resources – both in health care and in the skilled trades. If elected, what would be your biggest priority? We need to continue to build – more homes at every price range, more locally developed products through our manufacturing sector, and the infrastructure (both physical, like roads and facilities, and adequate, well-paid human resources) to support our continued growth.

Why are you the right candidate for this riding?

For the past 11 years, I’ve been honoured to represent our region as your trusted voice, getting results at Queen’s Park. I have learned a lot about how the provincial government operates in that time and I’ve managed to build an extensive network. At the same time, I’m very passionate about my beautiful home community. My wife Tawnya, a local educator, and I love travelling between the Oak Hills and the County’s south shore connecting with our neighbours.

We have so many great things happening here with our artists, sporting community, agricultural producers, and tourism, culinary, and hospitality industries.

I am also very proud to be able to say Canada’s largest Air Force base, CFB Trenton, is in my riding. It’s a pleasure to promote and celebrate the people who are making a difference here, but also to listen and represent our community as we tackle broader challenges related to housing and affordability