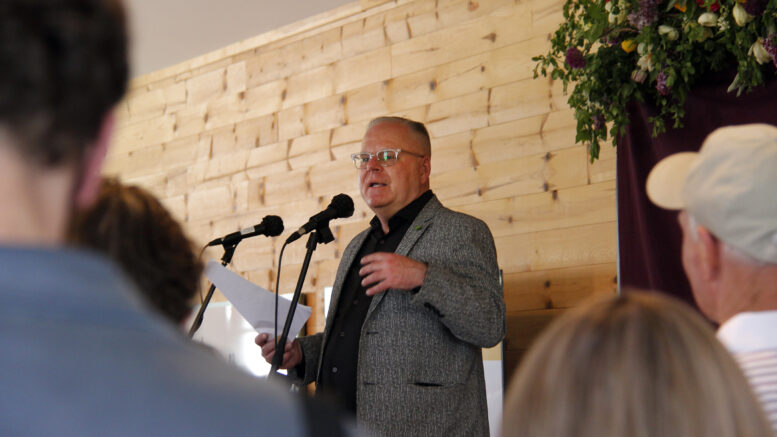 BACK TO THE FUTURE-PEC Community Partner Tim Jones speaks to a large crowd, positioning Base 31 as integral to both the past and future of Prince Edward County. (Desirée Decoste/Picton Gazette)

PEC Community Partners Inc. hosted a gathering on Friday, May 20th at their newly acquired property on the Picton Heights. The property, known most recently as Loch Sloy Business Park, was most famously known as No. 31 Bombing and Gunnery School, an air base during World War II, which morphed into Camp Picton once the war was over.

The event began with a speech from Tim Jones, member of PEC Community Partners Inc. Jones invoked times gone by when he revealed the new name of the site, Base 31. Jones spoke to a large crowd of those eager to hear about the future of Base 31.

The partners consist of five individuals, some of who are members of Tercot Communities, DECO Communities, PEC Placemaking and Rockport Group.

“Everywhere we turn, people seem to have a story about this place, whether regarding their father or family member who trained or worked up here,” began Jones. “People learned to drive on the runways, people have been here for events or partied on the roofs of some buildings. It’s amazing the stories that have come out of this place. With such a rich history, we really believe this place isn’t just a relic but has something to offer our collective future as well.”

Jones also drew upon the more distant past, reflecting on the myriad Indigenous tribes that inhabited the land prior to colonization.

“Of course, there’s the military heritage, but that’s recent history when you think about it,” he said, referring to the approximate 10,000 years of Indigenous stewardship of the land. “We are looking forward to collaborations in Tyendinaga, as we uncover stories in that community that are relevant to this site, as we welcome Indigenous artists into our spaces and as we contribute, as we will, to helping to preserve the Mohawk language and culture.”

Drawing upon a recent conversation with Royal Hotel Owner, Greg Sorbara, Jones noted he and the partners were motivated by the sense that the County is “intoxicating”.

“We bought this site, partly because we fell in love with it, but partly because, as Greg Sorbara just told me out in the courtyard, we find the County to be intoxicating,” said Jones. Jones insisted the property would evolve as a collaborative work in progress.

“We ask you to think about Base 31 as a destination in progress, it’s not going to be perfect right out of the gate, but we’ll build it together,” he said. Collaboration is something easy to say but kind of difficult to do. Over the last five months, our small team has been reaching out to community leaders and building different relationships, trying to establish an ethos of collaboration.”

With collaboration in mind, Jones announced 31 collaborations within the community, including with the municipality, All Welcome Here, Glenwood Cemetery, History Lives Here and the National Air Force Museum, to name a few.

While Jones positioned Base 31 within the echelons of history, fellow PEC Community Partners member and Chief Placemaking Officer, Assaf Weisz, spoke to the future plans for the property, beginning with a benefit concert for TTO on July 2nd.

The property will also host a craft beer festival, a comedy show and several live performances by well-known Canadian musicians such as Sarah Harmer.

Weisz also pointed to the regenerative landscaping plans for the property.

“We’ve embraced a regenerative approach to landscaping, which is about restoring ecological health here. We are situated in an alvar landscape, or what is supposed to be an alvar landscape, which we hope to revitalize as such,” he explained. “We’re working to bring back biodiversity, plant native species and improve soil health, ultimately inviting back birds and pollinators so this becomes part of the point of enjoyment.”

The landscaping plans include planting over 1000 plants and 150 trees on the property, to begin with.

Events and landscaping aside, Weisz explained there are plans to collaborate with the arts community.

“We’re going to be making major investments in art and artists to reimagine this place as a canvas. This is an incredible canvas for storytelling, for provoking thought, for great conversations, for inviting a little mischief, and we’ve already gotten started with two calls for proposals out,” said Weisz.

Speaking on behalf of the municipality was Mayor Steve Ferguson who thanked PEC Partners for their “faith in our community”.

“I’d like to, on behalf of council, staff and residents of the County, welcome the partners to prince Edward County. We’re glad you’re here. I’d also like to thank you all for your faith in our community. I think everyone in this room feels that we have a very special place here,” Ferguson commented.

For more information on Base 31, including a list of events, please visit: https://base31.ca/