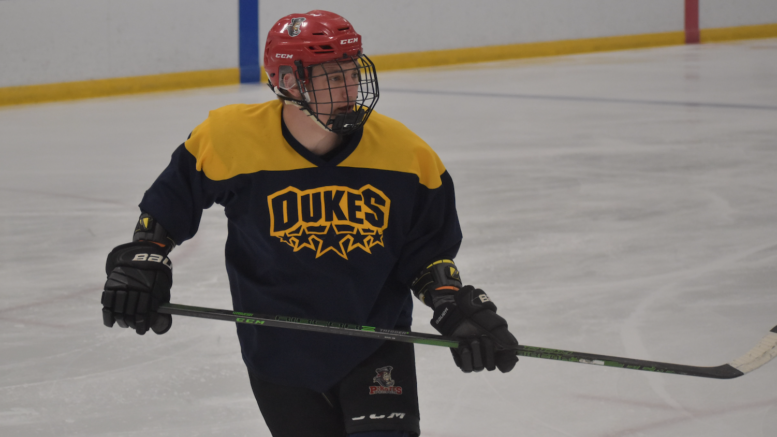 Top-end hockey talent and a good cross section of it Prince Edward County-born took to the ice at the Quinte Health and Wellness Centre in Belleville this weekend as the Wellington Dukes got back into the habit of hosting a large scale spring camp.

Over 100 skaters and goalies comprising six squads were on the ice over the two day session, taking part in on ice analytical testing (response time, speed, puck control, etc) and then took part in a series of scrimmage games.

“It was an incredibly successful camp for the organization and we couldn’t believe the high level of skill coming from the 2005 and 2006 birth year group,” Dukes Head Coach Derek Smith said. Smith surmised the while COVID pandemic curtailed a number of things, it also built in time for players to focus on day-to-day training in the goal of honing their hockey craft to the sharpest point possible.

“It was a large camp and a lot of players really put themselves out there and we were on notice to talk to them and find out what their future plans are and it really didn’t look like a May camp to any of us. This was a throwback where the competition was fierce and the attention to detail was impressive,” the coach said. “It’s was not sloppy what so ever.”

Among the players that dazzled Dukes brass was Windsor-born speedster Zander Latrielle. The shifty pivot who might be short in stature was long on skill, turning a number of fore checkers into pretzels before making a nice set up pass or beating the goalie on a nice deke.

Comparatively, Latrielle has the look of a Mitch Martan- always lurking and ready to spring past opposing defenders like a trap.

An interesting wrinkle in Wellington’s late spring session was the number of players with Prince Edward County bloodlines.

Sure the regulars in the forms of Wellington natives net minder Nolan Lane and  blue liner Cole Lavender attended, looking to make the jump from the Picton Pirates to the OJHL club.

But this camp also featured 16-year-olds Brody Partridge and Liam Philip from the starry U16 Quinte Red Devils squad that made it to the semi-finals of the 2022 OHL Cup.

Cherry Valley’s Partridge was one of a dozen Devils tabbed in the OHL Priority Draft with the Peterborough Petes investing in the County product.

Meanwhile, fellow 2007 birth Issac Krentz parlayed a strong outing at the Pirates skates earlier this month to earn a spot in Wellington’s showcase this weekend and didn’t disappoint.

Krentz has played for both the Quinte and Kingston AAA programs in the past and didn’t do much during the COVID shutdown before getting back into hockey last season.

“Players have come a long way in 18 months and I was impressed to see how far Ben Smith has developed since our camp last year,” the skipper noted.

The County connection went even further when you note the parents of Carter McKee and Joey Coates who all grew up here.

“That’s an overall great sign for hockey in the County,” Smith added. “We haven’t had County player in a little while but it’s impressive to see the options that are developing.”

The Dukes are expected to line up some showcase teams that will take part in summer tournaments before opening their late summer training camp on August 20 in Wellington.