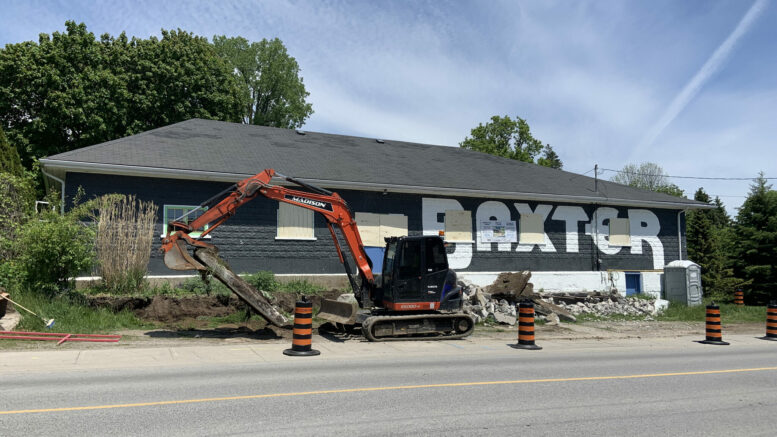 Spring generally marks renewal and in the case of Bloomfield’s Baxter Arts Centre, the season means time for a a fresh facade.

The local arts collective announced work has started at the former cannery-cafeteria-turned-meeting-hall-turned-art-studio with aims to improve accessibility.

The project will make the building fully accessible to the visually and mobility impaired, an idea that’s been talked about ever since the Don Baxter Memorial Building was purchased by the community from the County in 2011.

Over the course of a number of months stretching back to 2017, at least five different conceptual designs to make the place accessible were developed. Up until then, the Baxter Arts Centre was long on enthusiasm and commitment to the idea but short on know-how and funds. A close to final design was needed to solicit money to build the project.

The real work of making the building accessible began in November 2019, when an application to the Huff Family Fund was supported by the County Foundation. The money allowed the Centre to hire engineers to refine the design that was selected from the alternatives. Using the detailed design as a foundation, a budget for the project was developed to guide fundraising efforts. That was in early 2020.

As more became known about the building through assessments of its components, the project became more than just a gently sloped walkway. It evolved to include the demolition of the crumbling concrete stairs, landing, rain water cistern and retaining wall for the existing flower bed. The concrete used to construct these parts of the building in 1946 was badly deteriorated and, in some cases, had shifted out of place.

A new landing and stairs, a barrier-free walkway, flower beds, steel railings and electronic activated doors will replace the older components that will be demolished. A canopy at the front door is an addition that will provide visitors with weather protection. And the sidewalk owned by the Baxter Arts Centre that runs between Stanley and Main Streets will be rebuilt.

With a design and budget in place, “The Baxter” then set about to find the money to build the project. An application to the local Parrott Foundation was made in March 2021. A month later, in April, the Centre was told that it had been successful in obtaining a substantial grant from the Foundation, a grant that covered roughly half of the estimated project cost.

Previously, in July 2020, an application had been made to the Federal “Enabling Accessibility Fund (EAF).” The response received in November 2020 was that the Fund had run out of money. The Baxter were to be notified if additional monies were allocated to the program. Over a year later, long after the EAF application had been forgotten, the Centre received an email and phone call in September 2021. The news from the EAF was the project was being granted an amount that nearly matched the funds provided by the Parrott Foundation. Now, Baxter was close to the target set by their project budget.

A second application to the Huff Family Fund was made in early 2021. This application focussed on the budget shortfall the project was facing at the time. The request to the Fund was for half of the shortfall amount. The Centre believed the remaining amount could be found in the local community based on the support provided to the Centre in the past.

The funds that have been granted by the Enabling Accessibility Fund, the Parrott Foundation and the Huff Family Fund will allow the building to be fully accessible, an idea that’s been talked about for the last 10 years. Given the Centre is in the early stages of soliciting bids to build the project and a contractor has yet to be selected to do the work, the amount of the individual grants or the combined total available to the Centre will remain confidential until a contract has been signed.

A new face and a walkway designed to accommodate the visually and mobility impaired is a great 10th birthday present for the Baxter Arts Centre. The Baxter will continue to be a creative space for making art and to serve as a community gathering place without limitations. As it’s become affectionately known, The Baxter can now focus its attention on enhancing its post pandemic programming so the community can continue to learn more about the arts.