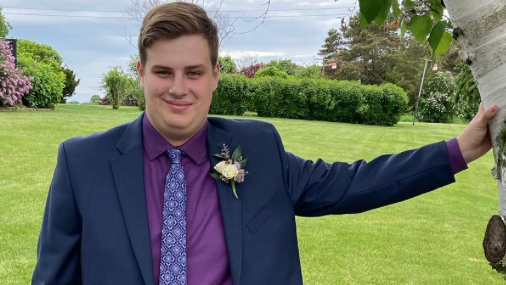 PECI Senior Austin Lavender was chosen as the 2022 PECI Valedictorian by way of a vote amongst his peers. Lavender was announced as the 2022 commencement speaker at the school’s prom on Saturday (Facebook photo)

A tradtional rite of passage for the graduating class of PECI returned Friday to Waupoos Estates Winery.

This year marks the first time PECI’s prom ran in the last three years due to the COVID 19 Pandemic. It was quite a scene at the winery with over 100 students attending the event.

Everyone who worked at the winery also chipped in and made the experience magical and memorable for all.

“Prom is a special event for our students to celebrate together all of their hard work and perseverance over the past four years. It was truly such a tremendous experience and It couldn’t have turned out any better,” Koutroulides said.

The prom was exciting for all parties involved and everyone seemed to enjoy themselves. The night went in order as all the staff and students arrived at the beautiful winery and were taking pictures everywhere, some near the shoreline, some near some amazing vineyard and some just with their friends/counterparts anywhere they could. After socializing, everyone went inside and was served an appetizer followed by a main course of chicken Alfredo, pasta and plenty of other gourmet dishes. After supper, students were able to take candid and posed photographs in a photo booth where grads could take pictures to commemorate the once in a lifetime experience.

“Students loved the photo booth and they all said it was probably the most fun they had all night, they told us we had to book them for next year’s prom as well,” said Koutroulides.

While the photo booth was going on, servers set out cake for dessert and a candy bar that included lots of tasty, sugary sweets for the staff and students to indulge in. There was a slide show featuring pictures of every student and a dance floor for students to show their moves on as well the cap the night off.

Before the night concluded, PECI announces their annual valedictorian. In a tight race that featured a number of top students, this year’s valedictorian ended up being one incredible student that stood out from the pack. Austin Lavender, whose name when announced featured a long, loud cheer at the winery.

Lavender, 17, is from Bloomfield and previously attended Pinecrest Memorial. Carrying an incredible average of 86 per cent throughout his secondary school career, Lavender is an appropriate and popular choice to speak on behalf of the 2022 graduates. Lavender credits friends, family and everyone in his life who helped him reach this point and added having Wellington Dukes billet at his home has helped him develop some very valuable life skills.

“I’m truly honoured to have the opportunity to represent our graduating class. There’s so many special people graduating and it’s an honour for me to be this year’s valedictorian,” Lavender said.