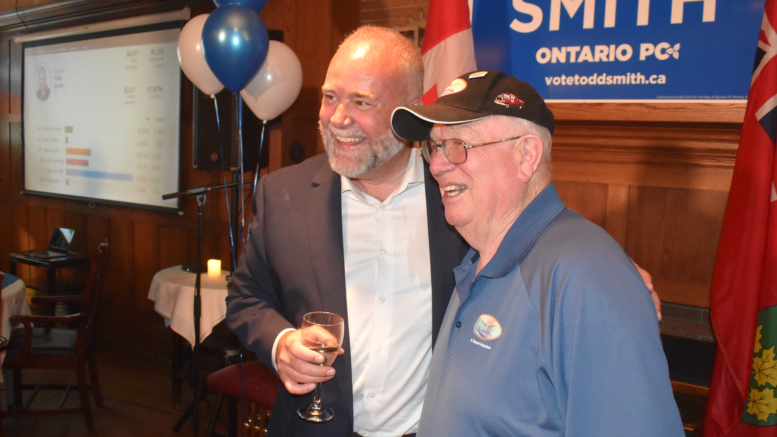 A fresh mandate from Bay of Quinte voters and a majority government with which to shape Ontario’s direction in the next four years is awaiting Todd Smith when he returns to the Ontario Legislature.

Smith wasn’t trying to hide that trademark ear-to-ear grin Thursday night as he and local Progressive Conservative party members and boosters were celebrating at the Belleville Club in the heart of the Friendly City.

While NDP Challenger Alison Kelly showed well in the town of Picton, Smith’s vote pulls in Quinte West and Belleville cemented his victory and earned him another four years as the MPP from the Bay of Quinte.

Smith was effusive in his gratitidute to his supporters from this side of the Norris Whitney Bridge and the other for their support and belief in his legacy of rolling up his sleeves and working hard for the residents of the riding.

“We’ve worked so hard on so many things in this riding, for example the new Prince Edward County Memorial Hospital and I want to be there when the sod is finally broken for that wonderful project and it looks like I will be so thank you again,” Smith told the Gazette. “There are a lot of other projects in the pipeline for Prince Edward County that I’ve been able to advocate for and I’m looking forward to seeing those things come to fruition.”

Smith called the local campaign period  “sleepy” and in his view there wasn’t a lot of interest in change in the riding.

“I’ve been part of campaigns where there was a driving force for change locally and wanting to oust the Liberal government,” Smith said. “To me, people seemed satisfied with the way things are going which is great when you are the incumbent.”

Smith added in his view,  Green Erica Charlton, the NDP’s Kelly and Liberal Emilie Leneveu did the best they could but those candidates were “let down” by the leaders of those respective parties.

“There was no message there from any of them that resonated and, in my opinion, that’s because we were able to manage through a 100 year pandemic fairly well and managed to to accomplish a lot, in this riding and elsewhere in rural Ontario,” the MPP said.

The victor added the next four years for Bay of Quinte and rural Ontario are looking very positive under the leadership of Premier Doug Ford.

“There’s challenges for rural Ontario but we are looking at meeting and overcoming those challenges whether it’s physician recruitment and health human resources in general and we need to plan to do that,” he said.

Smith noted housing is another major issue facing Ontarians and mentioned eight pieces of legislation that have passed at Queen’s Park adressing the province’s housing shortage however this issue can’t be solved in a short timeline.

“Housing just doesn’t pop up over night. We need to more skilled tradespeople for example and that sector has been neglected for the last 15 years so the solution is in the works and real soon, we will be able to realize the rewards of some changes we’ve been making for Bay of Quinte and rural Ontario.”