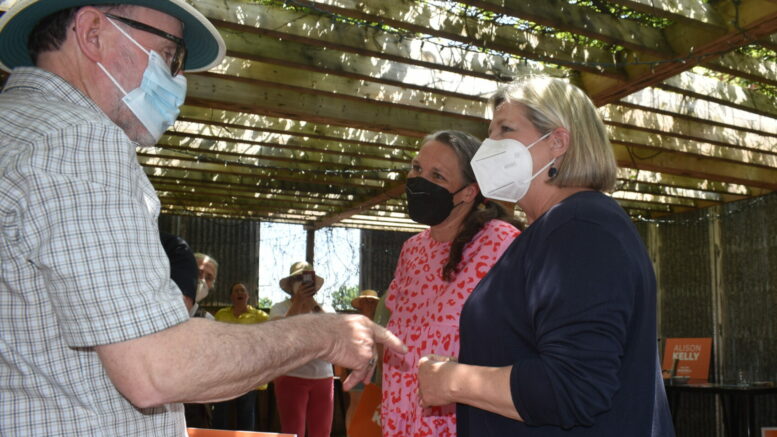 While NDP candidate Alison Kelly made substantial inroads in Prince Edward County in the 2022 provincial election, it was another disappointing second place finish for the provincial New Democrats in the Bay of Quinte and Ontario in general.

Kelly and her supporters gathered at Belleville’s Beaufort Pub Thursday night to watch the results of the Ontario Election role in and the views on the television screen was not to the group’s liking.

A second straight Doug Ford majority was declared by major media outlets within 20 minutes of the polls closing, leading to some long faces and worrisome glances amongst the NDP faithful.

In speaking with the Gazette after it was clear she would not upend incumbent Todd Smith, Kelly highlighted the positive reception she received at a number of doors including some new voters who were discovering the party for the first time.

“That’s me, I’m the NDP,” Kelly recalled a elderly voter telling canvassers when the party’s planks on investing longterm care and seniors supports were detailed.

“There’s so many people that we struck a chord with and empowered to go to the polls and make their voices heard,” Kelly said. “A lot of people were awakened to the fact the provincial government doesn’t just serve the elite few, it serves all of us and I hope everyone takes that truth to heart in the next four years.”

Despite the setback, Kelly remained upbeat with the fact the NDP polled well with youth and she hopes that trend will mean the most positive of results in 2026.

“There’s a lot of youth that been polled and see we are the party of the future, they see the empowerment opportunity here. We want to provide them with education they can afford,” Kelly said. “We have four years of hard work to do and really empower each other.”

The candidate said more grass roots and collective voice initiatives that drive positive change in Ontario’s communities will be the order of the day over the next four years.

Kelly added she wouldn’t not consider running in 2026 but said a number of things can change between now and then.

“I’m really thankful for all the volunteers and the people who embraced this campaign and knocked on thousands of doors in the Quinte region. We had volunteers of all ages come out and I have to be excited about what the future holds for the party locally.”