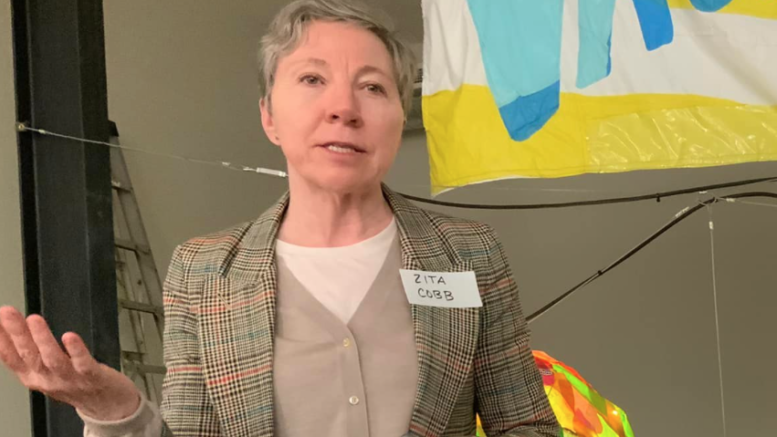 On Monday, May 30th, THRIVE Prince Edward County welcomed a group of residents to attend a talk and group discussion led by Shorecast founder Zita Cobb and Mary Rowe of the Canadian Urban Institute and My Main Street initiative.

Having only been in operation for about a year, THRIVE PEC is a fledgling group comprised of the County of Prince Edward, Community Futures and Upper Canada Equity Fund. The group was born of the acknowledgement that the County is facing critical issues, from lack of affordable housing to a severe childcare shortage.

Karen Palmer of THRIVE PEC spoke to the Gazette to help position the emergence of the group within the context of this community’s most pressing problems.

“Prince Edward County was fortunate to be among five communities chosen for a Community Economies Pilot (CEP) funded and organized by the Shorefast Foundation and the Canadian Urban Institute (CUI),” began Palmer. “Zita is the founder of Shorefast; Mary is the head of the CUI. Their visit and support for the launch of Thrive came out of that pilot.”

The Shorefast Foundation is, as per their website, a registered charitable organization that owns a set of programs and social businesses in service of the local community. Shorefast “represents a determined effort to think holistically about how to find a way of life that is equitable, dignified, sustainable – and joyful.”

The Canadian Urban Institute is another charitable organization that focusses on building vibrant, resilient, equitable and livable communities.

Palmer noted the CEP gave staff from the municipality, Community Futures and The County Foundation access to global experts in the areas of community finance, “architectures for collaboration”, community engagement, as well as community data collection and analysis.

“Out of that pilot came an awareness that PEC needs an economic development strategy, but one that goes beyond simply growing the economy. It also needs a plan that takes into account the liveability of a growing community and needs to incorporate things like conservation and protection of valuable cultural and natural assets, access to day care, health care, social programs and recreational opportunities,” Palmer explained. The County is arguably at a crossroads between the past and the future, with the disparity between haves and have nots growing as this community bears witness to a sizeable influx of new residents. The community is also experiencing a slew of new development projects in various stages of completion, all while residents are facing repercussions from the pandemic and inflation. These are just some of the many issues that precipitated the creation of THRIVE PEC.

“Because of where The County is at the moment – coming out of a COVID, seeing a big influx of new residents, and seeing a lot of new development projects – it seemed a good moment to create Thrive PEC and spend the first while listening to where the community sees opportunities,” stated Palmer.

In speaking to the residents gathered at the Armoury on Monday, Cobb detailed her experience with the economy of Fogo Island, which helped necessitate the creation of Shorefast.

“We have allowed the economy to evolve in a way that isn’t doing the best job to serve the most important things,” stated Cobb. “I grew up in Fogo Island and saw an economy absolutely devastated, like someone had pulled the carpet out from under us with the industrialization of fisheries, which was the beginning of an industrial economy.”

Cobb noted this was the beginning of her asking “why, how, and who is making these decisions?” These questions are some of which guide the work of Shorefast.

“How do we get the economy working for the places we live? If we don’t have an economy that the community can feel secure in, well, your community will be in trouble,” she stated, matter-of-factly.

She also pointed out that every single person has a stake in the economy, be it local or otherwise.

“Every single person owns the economy. Every single person has a role. It’s understanding what it is and what our true assets are. How we get the financial system working for that,” said Cobb. “It’s not only about the small communities.”

Mary Rowe, who has experience working in New York City, noted the conversation around maintaining a sustainable economy for locals is happening there too, as with other large cities.

“The same conversation is happening no matter the scale. In New York City, what we’re seeing is neighbourhoods that evolved over decades, intensely connected with one another, with multigenerational families…all getting pushed out by high end hotels, high end restaurants. All of that started to affect the capacity of the city to reinvent itself and the economy,” explained Rowe.

From her experiences in larger areas and Cobb’s experience in Fogo Island, it became apparent no community is immune to the effects of gentrification. Similarly, what is shared between people and places is an attachment to place.

“At every scale we’ve decided what we share is an interest and concern about attachment to place,” noted Rowe. “As economies globalized and money has developed a life of its own, it has detached us from the natural environment, the built environment, the place which we derive a sense of meaning and identity.”

In order to reinstate a meaningful connection between money and place, Rowe suggested the economy either has to slow down or “increase the attachment of money to the community so that the benefits are shared.”

In terms of the County, THRIVE PEC is hoping to develop resilience in the community through development based plans that reflect the aspirations and values of residents. Community conversations will attempt to answer the following questions: What do we have? What do we love? What would we miss? What are we collaboratively going to do about it?

Already, the group has hosted 77 residents as they participated in what is described as Asset Based Community Development Workshops (ABCD workshops). This was led by the Coady Institute, an organization that helps to build resilient communities, strengthen inclusive economies, and promote accountable governance through the mobilization of community change leaders on a local and global level.

Palmer, in speaking with the Gazette, offered some detail about the residents who attended the ABCD workshops along with the desired intent.

Palmer also pointed out that one of the underpinnings of the Community Economies Pilot that the County participated in is the notion that, while traditional economic development focuses mainly on only government and business, a more equitable and thoughtful approach is to bring community into the conversation as a full partner.

“When community is part of the conversation, the outcomes tend to be more meaningful and impactful for residents,” she added.

Palmer described ABCD workshops as being a “glass half full approach”. One wherein a community comes together and, essentially, tries to answer the question “what is missing?”

She was careful to note that, at each workshop, participants were asked who was missing from the discussion.

“At each of our most recent sessions, we asked participants who they thought was missing from the discussion or around the table,” said Palmer . “We got lots of good feedback there, and lots of willingness to help connect. We know we’re missing many people and viewpoints right now – but this is just the beginning!”

When asked whether there would be further opportunities for the public to engage, Palmer was emphatic in her response, reiterating the work done so far is just the beginning.

“Oh yes! After the last couple days, which were incredibly inspiring and filled with great ideas and enthusiasm, the core THRIVE group will be participating in a Tamarack Institute event called Celebrating Neighbours: Measuring the Impact of ABCD,” she said. “This will help us learn more about data collection, engaging with youth, and provide a deeper dive into ABCD, and will help us formulate next steps. Right now, we anticipate we’ll be working with community members who’ve expressed an interest in being more deeply involved in THRIVE to create more opportunities to gather and talk. More information on this will be available as it comes together.”

In some of her closing comments, Cobb harkened back to Fogo Island and the lessons learned there about creating a sustainable tourist economy.

“A tourism economy is a dance with the devil. If you do it well, and there’s no reason you shouldn’t or can’t, it will be good and sustain the community,” said Cobb. “It must not be your only economy, otherwise you will be a caricature of yourself. A cartoon of who you used to be, like visiting an 18th or 19th century fishing community that isn’t a fishing community anymore. That’s pretty hollowed out and not very good for local people.”

For more information about THRIVE PEC and their upcoming events, please visit: https://thrivepec.ca/