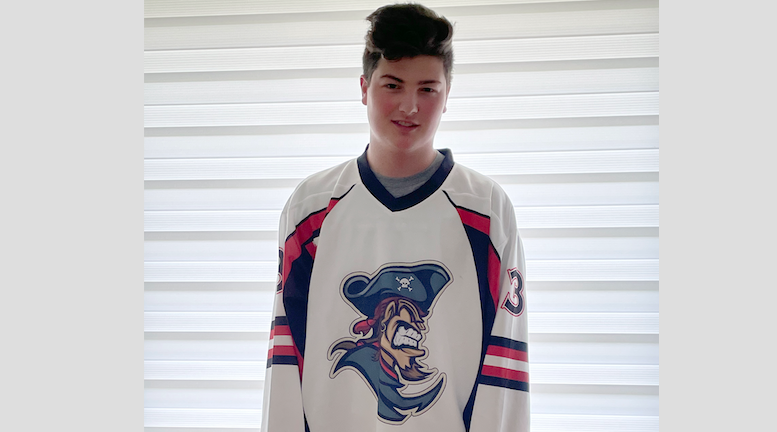 The club posted to its social media Monday winger Cole Smith has inked a PJHL contract.

A native Kingstonian, Smith played for the Kingston Area Minor Hockey Association Canadians AA U18 squad last season and made a big impression on the Picton brass during the club’s spring identification camp in May.

Smith potted nine goals and added a half dozen helpers in 31 games in his final season of minor hockey.

A no nonsense force in the corners, Smith also managed 32 penalty minutes and it was the forward’s physicality attracted the Pirates to the 6’1”, 180lbs winger.

“We were really impressed with the combination of speed, foot work and willingness to command the corners,” Pirates General Manager Jason Parks said. “There were some known players in the camp but Cole was unknown to us. It was a cold call on his behalf asking to take part in the camp and we were able to slot him in and we are thankful for that connection.”

The GM added Smith got a positive endorsement of the organization from fellow Kingston product Ryan Bauder. The Pirates picked up the rearguard in January and spoke highly to Smith of his half season in Picton skating for the Bucs.

A 2004 birth year player, Smith is expected to be one of several 17 and 18 year-old skaters the club will be signing this off season as it prepares to battle Tod Division foes in its 33rd year of operation.

With an exodus of skill due to the gradation of players like Noah Brant, Devin Morrison, Nate Boomhower and Owen Dever, the club is expected to take on a rebuild effort for the upcoming season.

“But that doesn’t mean we aren’t aiming for the top of the Tod,” Parks noted. “We’ve got some work to do in finding the right pieces to slot into our lineup- Cole is one of those valuable pieces- but we’ve got a core that’s hungry to compete this year and a lot of interest from those 2004 and 2005 birth year players that want to gain the exposure of playing and succeeding in the PJHL.”

On board with the Pirates: The Deseronto Bulldogs drafted three Pirates in Eastern Ontario Senior League cattle call earlier this month with Boomhower, Brant and Dever getting selected. Those three could join former Bucs Will Harrison and Kurtis Wood on the other side of the Skyway Bridge next fall…The club is hosting its annual awards banquet at Rotary Hall on Saturday night.