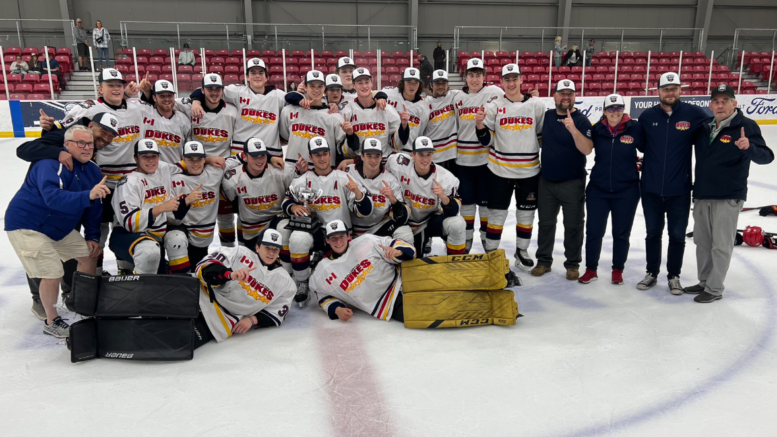 The Wellington Dukes White team were the winners at the 2022 TEP Showcase in Toronto this weekend. (Dukes Photo)

The Wellington Dukes were able to flex their organizational muscle this weekend at the vaunted Team Elite Prospect tournament in Toronto this weekend.

A pair of Dukes entires played into the elimination rounds on Sunday after both the Wellington White and Wellington Blue teams went undefeated in round robin play.

Wellington Dukes Blue would ran into a hot North American Screaming Eagles squad in the quarterfinals but the Wellington Dukes White entry had the sweetest revenge as the locals shaded the Brooks Bandits club operating under a different brand 1-0.

Jacob Osbourne was spot on in the final as his White Dukes and the Eagles played to a scoreless draw into the third period. That marker was all the Gloucester, ON needed to lift his squad to a championship win.

“Jacob Osbourne was outstanding for us and Brady Spry was as equally good,” Wellington Dukes head coach Derek Smith said. “When you go into a tournament of this calibre and only give up five goals total through eight games, you are going to be successful.”

Smith said with both squads playing into Sunday, it was a very hectic weekend for the Dukes staff but one that bore fruit for the club as the team looks to build for the upcoming season.

“We did will without a ton of veterans in the lineup and I think a lot of 2004, 2005 and 2006-year births showed really well, elevated themselves and got on our radar. There’s still six or seven weeks before training camp for them to make gains in the weight room or the practice rink and we know we are going to have some really tough decisions moving forward.”

The Blue Dukes got off to a positive start in their first game, besting TDI- a squad from Blind River- 4-1. Will Mitchell, Will Poot, Rylan Reid and Jack Tracey would all score for Blue while Picton Pirate net minder Nolan Lane had a solid outing, allowing a single second period goal.

“Nolan was very good for the Blue team who was a little by younger than the White team,” Smith noted.

Later in the day Friday, the Blues bested Pursuit Hockey Development out of Niagara 4-3 and had a big comeback to do it. After Treacy staked Wellington to an early 1-0 lead, Pursuit counted three times in the second to put the locals down 3-1.

But the Dukes came on in the third with goals from Justin Murdoch, Carter McKee and Deacon Ellis. Picton’s Liam Philip would set up the game winning tally with under two minutes left in the contest.

Saturday morning, the Blues topped Hyperfit 5-2 with Wellington again coming in in the final frame.

With the teams tied 2-2 in the third, Philip had the game winner at the 3:11 mark. Luke Johnston’s second of the game made for insurance while Mitchell potted an empty netter in the late going. Brighton’s Murdoch also tallied. The final game of the day in the 37 team showcase saw the Blues hook up with Northern Porspects out of Central Ontario with Wellington coming out on top 5-1. After prospects opened the scoring five minutes in, Wellington tallied five unanswered thanks to Cole McGuire, Poot, Mitchell (2) and Johnston.

Unfortunately, Lane would take a slap shot to the mask and the head-high blast took its toll the following day as the Eagles racked up a 5-1 elimination round win.

Zander Latreille had the lone goal for Wellington.

In their opening game, the Whites were able to hang on 3-2 in a win over E11 Gaming, an outfit sponsored by OJHL grad and NHLer Zach Hyman.

Beau Reade and Ethan Walker would score in the first as the teams drew 2-2. In the second frame, Port Hope Panther Michael Patrick bagged the winning goal in the second frame thanks to help from Thomas Kuipers and Beau Reade.

Later in the day on Friday, Wellington was able to blank Cherry Valley’s Body Patridge and his Fullblade Hockey team.

On Saturday morning, the Whites and Brian McCann Arsenal played to a scoreless draw as Osbourne maintained his hot hand in the crease.

Nate Woods, how played for the Pirates in their limited 2020-21 season before embarking to the United States to play prep school hockey last season counted twice as did Ethan Walker while Coates, Jared Langdon and Graeme MacAuley had singles.

The Whites started they march to the TEP Championship on Sunday morning with a 2-1 win over DevCo Hockey. Down 1-0 after two periods, defenceman Mitchell Dmytrow set up Jacob Vreugdenhil for an equalizer at 5:39. Then, with under a minute left, Jacob Dietz set up Walker for the goal ahead marker.

Drawing the A1Prospects in the quarters, Woods would set up a pair of Wellington goals of the sticks of Reade and Patrick.

With the game tied 2-2 at the end of regulation, the game ended up being decided in a shootout where Wellington prevailed thanks to a nice effort from Vreugdenhil.

In the semis, Jim Thomson’s Purple prospects proved to be a tougher draw but Spry’s play and a late Ethan Walker goal setup by Coates and Patrick was enough to allow the Whites to slide into the finals.

The Dukes will continue to work out informally in Belleville over the summer with the club expected to open its 2022 training camp in mid-August at Lehigh Arena.