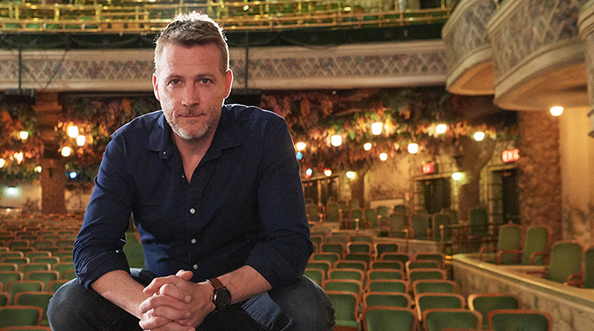 Now in its 16th season, Festival Players is no stranger to performing arts in Prince Edward County. Having brought a range of plays, comedy shows and other performances to the stage since 2006, the 2022 season promises the biggest lineup yet. With everything from comedy to poetry set to music, this season promises a range of events and experiences. To learn more, the Gazette spoke with Graham Abbey, who took the post as Artistic Director in 2016.

With part of the stated vision of Festival Players being to foster the development of a “performance hub” in the County, Abbey pointed to the creative inspiration drawn from the landscape and the community of artists that have found creative refuge here.

“My attraction to the County, and what I’ve heard form other artists, is it’s a muse,” said Abbey. “This beautiful landscape is a muse for all sorts of artists which you can see across the County. There’s something about this part of Canada that speaks to artists…it’s a lovely place to create.”

Speaking of inspiration being drawn from place, Abbey explained the marquee show of the season this summer is Shape of Home, a musical exploration of Al Purdy’s work.

Purdy, who lived part time in Ameliasburgh, wrote and found inspiration in the wilds of Prince Edward County from 1957 until his death in 2000.

“I know Al Purdy wrote about the land and the people of this region,” stated Abbey.

When speaking of the impetus behind bringing Purdy’s work to the stage, Abbey described a work borne out of the isolation of the pandemic and a love of Purdy’s poetry.

“Al Purdy has always spoken to me. We had a year where we couldn’t perform in 2020 and asked ourselves what we could create in isolation that we can also perform once theatres are back running,” explained Abbey.

“Shape of Home is our marquee show this season. We wanted to launch it last year, but it just wasn’t ready,” said Abbey. “The songs are extraordinary, and all the words are the words of Al Purdy. The dream is to launch it in the county which was so key to Purdy’s work and have audiences listen to his words… There’s music in his words. It’s a natural fit, I think.”

The pandemic not only helped shape some of what would be performed during the 2022 season, but also where Festival Players would perform. The company ended up pivoting their performances to accommodate outdoor shows and landed at The Eddie Farm, just outside of Wellington.

For this season of performances, shows will take place outside and in the historic barn on the property.

“When the pandemic hit, work stopped. What that did for artists is, you had to look inward and ask, ‘Where are we and where are we going?’ I certainly had those questions for myself individually and, as a company, we had a big pause,” Abbey explained. “It helped us look inward and develop some work.  We landed at the Eddie Farm because of the pandemic as well, whereas before we were in a small indoor studio space in Wellington.”

With the move to The Eddie, Abbey noted, at least half their work will be performed outside.

“The pandemic brought us to that property and the ability to stage both outdoors and in that beautiful century barn. So, we’re very happy being able to play there. It gives us a bigger space and a chance to do at least half our work outside, under the sky, which I think is so important here in the county,” stated Abbey.

With their biggest season yet, Abbey said the company is “leaning into” a celebration of live performance, especially after the last, harrowing two years.

Though the Eddie Farm provides a more expansive venue than their previous, indoor venue on Main Street in Wellington, Abbey expressed a desire for audiences to be able to connect with the artists.

“We really want to make an effort to connect with our local audiences and give artists a chance to experience a real conversation with our audiences,” Abbey commented, adding, “come out, have a glass of wine and enjoy the show.”