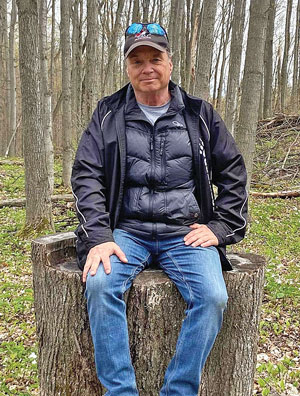 An affable, witty and caring father, brother, uncle and son passed in Ramara Township (outside of Orillia, ON), suddenly and unexpectedly on June 26, 2022 in his 63rd year.

Christopher (Chris) Allan Morrison is survived by his daughter Carly, his sisters Tracey and Leslie and their spouses Mats Lindberg and Dan Fournier, his nieces Sarah, Elisa, Natalie, Madeleine and his nephew Jackson. He is predeceased by his father J. Earl Morrison and his mother Jean Morrison. Chris will be dearly missed by friends and family members both near and far.

Sharp as a tack and as social as they come, Chris would never miss an opportunity to introduce himself and strike up a conversation. He had a sharp political mind, natural curiosity, a sincere interest in people and he loved to share a story or a laugh.

Chris was naturally athletic and played a variety of sports in his youth – his favourite being football. He recently returned to his love of both hockey and golf and made a new circle of connections in a men’s rec. hockey league in Orillia, alongside his brothers-in law. Although his Toronto Maple Leafs never rose to NHL champs, despite the “encouragements” Chris screamed at the TV screen, he did savour the thrill of seeing them play live.

Chris attended Napanee & District Secondary School and was a talented trumpet player and drummer. He spoke recently of purchasing an electric drum set as a retirement hobby. His career began in radio broadcasting after graduating from Loyalist College in the late 1970’s. He worked at local radio stations in both North Bay and Sudbury, before eventually moving to the Toronto area to work in sales.

Travel was a passion, whether he was exploring local snowmobile trails or fondly remembering early family ski trips to Quebec and Vermont and road trips across Canada. He visited many US cities and had wonderful winter get-aways in Mexico and the Dominican Republic.

Chris’ most cherished place was the family cottage on Mazinaw Lake, where he spent most summers. He never tired of the kids ‘begging’ to go tubing or showing off the beauty of Bon Echo rock and the incredible views from the lookout perches.

His daughter Carly was the love of his life and he couldn’t have been more proud of her accomplishments, strength, independence and caring spirit. Chris was proud to teach her how to drive the boat and to help her with the purchase of her first car. They shared a love of music and Chris would burst with pride to hear his daughter perform, with her angelic voice. Chris’ spirit lives on through her and through the many lives he has touched.

Cremation has taken place and a gathering of family and close friends will celebrate Chris’ life later this summer.

As an expression of sympathy, memorial donations may be made to: Friends of Bon Echo Park www.bonechofriends.ca

Online condolences are welcomed at: www.carsonfuneralhomes.com