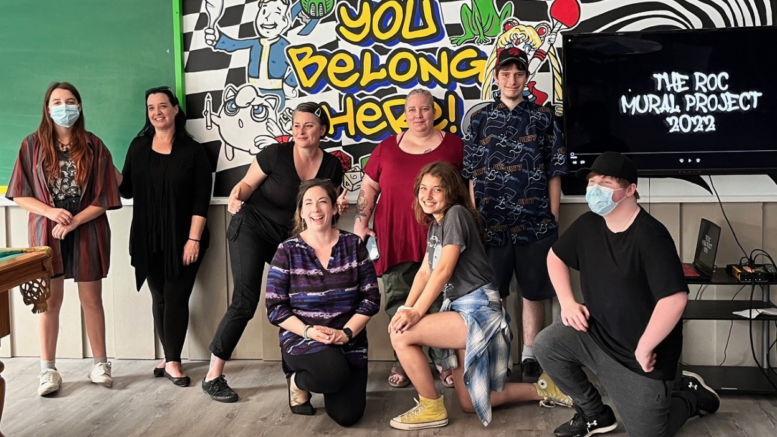 After several challenging years in which the ROC PEC Youth Centre had to close its doors to in person programing, the centre was happy to offer a full range of on-site activities once again this past March.

One of the first projects to begin after reopening was a collaborative effort between local multidisciplinary artist, Vanessa Rieger, and high school youth who attend the ROC’s daily lunches and after school activities.

The idea for the mural arose last fall, when Rieger approached the ROC to volunteer for a pumpkin carving workshop. The ROC then secured funding through the Youth Community Actions Project to transform a wall in the Youth Centre’s games room.

The mural project began with brainstorming sessions between Rieger and a group of six youth who met for a couple of hours each week to collaborate on what the Youth Centre meant to each of them, what they envisioned for the space, and then for the practical and professional experience of painting the mural itself. The group completed nine sessions in total. Each participant received a sketch book and some art supplies to document the process. The youth employed a variety of mediums and techniques, including pencil sketches and acrylic paint, to achieve the final results.

After some collaboration and reflection, the mural became “You Belong Here” based on the sentiments the group had around the feelings they had about the Youth Centre.

“The ROC was so pleased to be approached by Vanessa about this project. We have witnessed first-hand how being exposed to various mediums of art have supported the development of innovation skills when youth are encouraged to express themselves through the creation of art,” Darlene Thompson, ROC Executive Director expressed.

The project wrapped up on Monday June 27th during “The Big Reveal”. The youth, their friends and families, and members of the public were invited to see the completed mural, enjoy some light music and refreshments, and engage with Rieger about the process.

The ROC began in 2000 as a belief in the potential of youth and a vision to help guide them through the major and recurring difficulties in their lives. Within a year, a volunteer Board of Directors was established to guide the development of ROC, and to work at increasing funding and local support for the organization. Soon after, the board obtained charitable status with the Canada Revenue Agency, allowing them to provide tax receipts for donations.

In 2010, ROC employed an Executive Director to manage its growing operations. After 13 years in MacCaulay Village of Prince Edward County, ROC moved its programming directly into the schools to become more accessible to the youth. In January 2017, ROC opened the doors of the Prince Edward County Youth Centre, as a safe space to support youth success and contribute to a healthy and vibrant