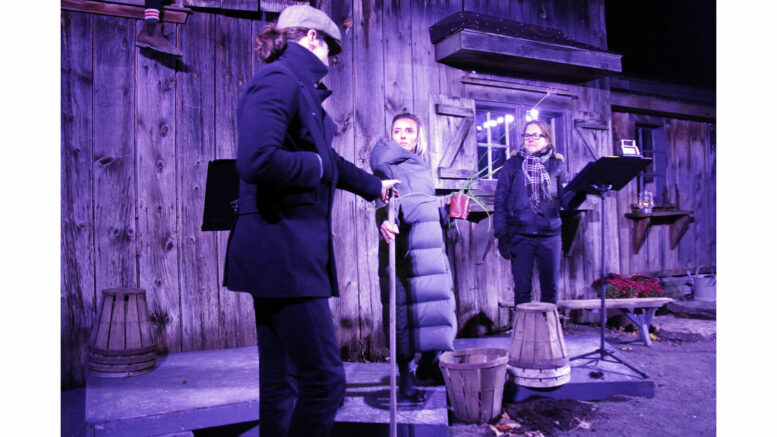 An old hay wagon has been transformed into a travelling playhouse to tour Prince Edward County (PEC) with a colourful new play about the region’s history.

The play, called The Boxcar Cowboy, will have its world premiere on July 16, when the self-contained theatre on wheels will be pulled by a pair of Clydesdales into Benson Park, Picton.

The show is being produced by Station Road Arts Collective (SRAC), a Hillier-based theatre group that has produced plays in theatres and other venues for 10 years. The collective has named the travelling theatre “Roamin’ Theatre Roulant”. The theatre will visit 8 places around the County with a troupe of actors and musicians between July 16 and September 10.

“This project is unique for three reasons,” says John Burns co-founder of SRAC, “an original play about Prince Edward County, is touring in Prince Edward county, in Canada’s only travelling theatre.”

Burns, a 50 year theatre veteran based in Wellington, Ontario is known for being the founder of Festival Players of PEC.

The Roamin’ Theatre wagon will leave Prince Edward County Fairgrounds at 1 p.m. and arrive in style at Benson Park at 2 p.m., with musicians playing and actors rousing the crowd.

The play, beginning  at 7 p.m. and suitable for viewers of all ages, tells the story of Charles Sherwin, a Depression-era teen from Hillier who rode the rails and came to be known across the country as The Boxcar Cowboy.

The Boxcar Cowboy was written by award-winning, Hillier-based writer Conrad Beaubien, co-founder of SRAC and a 50 year veteran of Canadian television, theatre and print.

Bring your own chairs and pay what you can for this outdoor performance which runs approximately 60 minutes.