It’s the second week of July so that means the annual inundation of a major cornerstone of the economy of Prince Edward County is finally starting to rankle locals. For the next six weeks, a quick trip to town is anything but and all visitors who have forgotten to pack their good sense and kindness will far out-number the beleaguered County resident.

With social media offering everyone an avenue to air their opinion on tourism (or over-tourism, as it may be viewed), it would serve everyone in the local populace to remember the steady torrent of visitors that spend their hard earned dollars for a small slice of what we live 365 days a year didn’t happen over night and, given the time tourism in the County, it’s relatively new in our collective experience.

Yes, Prince Edward County was a tourism haven dating back into the early parts of the 20th century. Anglers that wanted to try their hand at succeeding on the bass factory known as East Lake came form all over in the 1950’s. Other visitors would drive their cars right out on to the Athol Bay beach and stake a plot of sand long before Sandbanks Provincial Park was a glint in some bureaucrat’s eye. But we should do well to recall what 300 plus other municipalities in Ontario would proverbially kill for was firmly laid back in the mid 2000’s with the creative rural economy concept and now our local economy is simply reaping the windfall of that turn of direction. Sell the county as an experience with the beaches & natural attractions , wineries, restaurants, live events and splendour as the main selling point.

Basically entice people from all over to bring their money and leave it here in the summer time.

Ancillary industries- read entrepeneurial opportunities- would be required to keep up the grade and with lack widget factories willing to set up on the island, selling the county was about as safe a bet as could be made at the time. Adapt or die.

Boy, has this concept worked. Too well? That’s rub isn’t? We’ve got major brands like Bulk Barn and Wendy’s setting up with Starbucks already serving Pike Place Roast in Picton.

Remember when Tim Horton’s and McDonalds setting up within a month of each other back in the late 90’s was earth shattering news?

The County hosts events we would have never dreamed of a decade ago. But we’ve got issues too. A lack of accommodations. Crumbling infrastructure and an influx of visitors that didn’t have the good sense to go back to their concrete hovels and the audacity to pack it all in for the Prince Edward dream, forcing a meteoric rise in the housing market.

How does anyone unscramble a tourism egg? You don’t.

As you are bemused or blistered by the traffic, the noise and the odd bad actors, try to remember County folk travel too and there’s folks in other tourist meccas feeling the same just by our existence in their back yard. Also know it will all be over soon. ‘Til next July.

It was a weekend of rolling heartbreak for your humble scribe and countless others in the community as the deaths of Justin Crowe and Sarah Bradbury went from doubted rumour to grim reality to painful acceptance. The County native and his friend were lost in a tragic motor vehicle crash Saturday morning near his home in Ameliasburgh.

While Crowe had many dreams and interests like any County Boy, this corner only knew Justin the hockey player.

The rearguard suited up for several solid Prince Edward County Kings entries throughout his minor hockey career and managed to catch on with the Frankford Huskies part way through the 2021-22 Provincial Junior Hockey League season. Playing against his hometown Picton Pirates in Frankford on February 27th, Justin managed his first and only junior goal, sending a shot past his former County Kings teammate Nolan Lane at the 14:01 mark of the third period.

While Picton’s managerial hat was firmly adorned on its colossal cranium that night in late February, there was more than an ounce of Prince Edward County pride in this junior hockey-hardened heart when the puck sailed over the goal line and safely into the Pirate net. Given the conflicting context, it proved impossible to see the joy in the face of Justin when he scored his first junior hockey goal and not offer a reserved cheer and hand clap.

When a County-born player realizes success -even when it comes against the hometown side- it’s still a very special moment for many including this editor. We join in the Huskies, the Crowe and Bradbury families and the friends of Justin and Sarah at this time of devastating loss and offer everyone impacted by this tragedy our deepest condolences and sympathies. 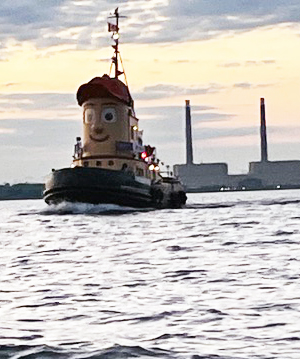 Theodore Too from the popular children’s television series made a stop in Picton Bay as part of the first leg of its 2022 Great Lakes Adventure. The boat is touring the lakes in support of the marine industry, Swim Drink Fish and serving as a Great Lake Guide. Theodore Too is pictured in the Upper Gap near Cressy Bayside with the Lennox Generating Station in the background. (Submitted Photo)