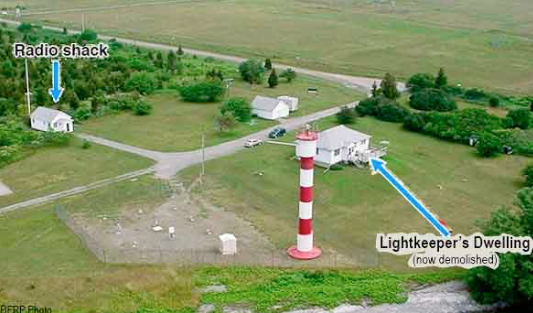 Interim President Liz Driver said the Government of Canada has already demolished historic buildings without gaining due process and any further demolition work must be halted.

“Any demolitions that may be planned at Point Petre must be halted until the Government of Canada’s current heritage designation process has been completed,” stated Driver in a press release issued Wednesday.

Driver added that lighthouses and their related buildings, especially the Point Petre Lighthouse complex, were not only essential aids to navigation around Prince Edward County’s dangerous points (known locally as “horns”) that jut out into the eastern end of Lake Ontario, but also significant elements of the landscape and the County’s cultural heritage.

The ACO PEC explained in 2015, the Point Petre lighthouse, along with two associated buildings — the lightkeeper’s dwelling and the radio shack — were nominated for heritage designation under the terms of the federal Heritage Lighthouse Protection Act (HLPA).

A proposal from a local community organization, the Hastings Prince Edward Land Trust (HPELT), to conserve the lighthouse and the other two buildings, has been under consideration by Fisheries and Oceans Canada (DFO) since 2015.

A lighthouse advocacy group led by local marine historian Marc Seguin called Save Our Lighthouses has diligently followed up with DFO every year or so to request the status of the designation process, and were advised  delays caused by clean-up of contaminated soil near the buildings, and a backlog due to the number of lighthouses nominated for designation under the HLPA, has meant that this collection of culturally significant buildings is still on track to be designated as a heritage site.

According to ACO PEC,  this heritage designation will be completed by the Minister of the Environment and Climate Change Canada (ECCC), who is also responsible for Parks Canada. Parks Canada administers the HLPA designations. To the dismay to Seguin’s group and local heritage advocates, a sudden halt to work at the site will already be to late to preserve the site in its entirety.

Without any public consultation and, evidently in complete disregard of the HLPA and Treasury Board policies concerning heritage buildings, ECCC has begun demolishing the heritage buildings associated with the Point Petre lighthouse.

The lightkeeper’s dwelling, built in 1962 as a home for the resident lightkeepers and their families has now been completely demolished.  The radio shack, dating from the 1950s, and housing the radio equipment for the once-essential radio beacon navigation system, is slated to be torn down presently, exact date unknown.

The regional office of ECCC has not provided a specific date. Without heritage  protection in place, the lighthouse itself, which is the responsibility of DFO, could be the next building to see the wrecking ball.

“A completed heritage designation process would have protected the lighthouse, along with the lightkeeper’s cottage and the radio shack as they are considered to be buildings of cultural heritage value that are directly associated with the Point Petre lighthouse,” Driver added.

The entire site is of great cultural heritage significance to all Canadians. The original 1832 lighthouse was replaced in 1967 by the current red-and-white-striped tower, a unique and historic structure itself.

This is one of the region’s last remaining vestiges of Canada’s once-vital marine history, which contributed so much to the development of our country from the 19th century through to the present day.
The lightkeeper’s dwelling was the third house that had been built for the lightkeepers who lived at the site with their families until the lighthouse was fully automated in the 1980s.

The radio shack was the control room for the radio-beacon navigation system. Before the widespread use of GPS systems, ships sailing across Lake Ontario relied on this marine navigation system whenever a lighthouse was not in sight.

ACO PEC believes that relevant sections from the Treasury Board’s “Directive on the Management of Real Property” of May 13, 2021 apply here:
Sec. 4.2.20, “Conserving the heritage value of federal heritage properties in Canada by
following the procedures set out in Appendix A: Mandatory Procedures for Heritage Assessment
and Conservation”;
4.2.25, “Undertaking due diligence,” especially with respect to “heritage value considerations”;
and
4.2.28, “Identifying opportunities to share special-purpose real property by assessing the costs
and benefits of co-locating with … other organizations that have complementary objectives.

In addition, the HLPA designation process must be respected.