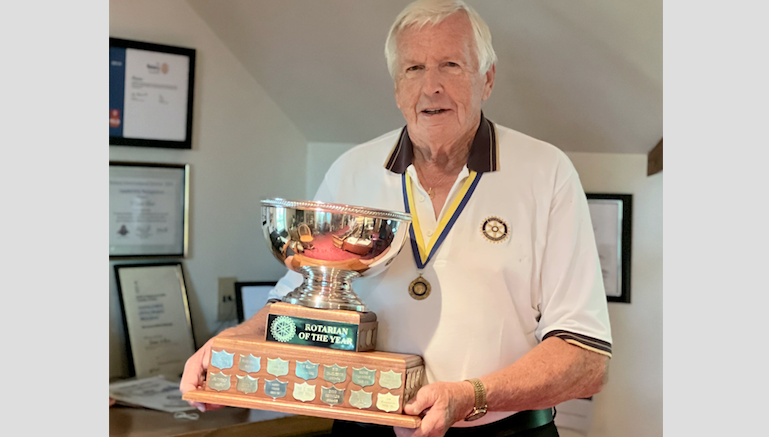 The flight path wasn’t the easiest but one of Rotary Club of Picton’s venerable members has set a sky high standard when it comes to ‘Service above Self’ in 2021-22.

Longtime Rotarian Bob Bird was presented with the Hepburn Trophy at a recent meeting. The memorial award is presented annually to the local club member who has demonstrated service above self in their work for Rotary. This trophy has been awarded each year since 1979.

In presenting Bird his award, incoming Club president Barb Proctor said the past president has demonstrated remarkable dedication and energy to fundraising and sponsorships that have sustained Picton club’s projects and events throughout the past year.

“Over the years, our Foundation Committee has always been motivated by Bob’s mentorship and fundraising innovations. 2021-22 has been no exception. The Rotary Club of Picton has scored in the top percentile for District 7070 by exceeding our targets for club  contributions to The Rotary Foundation’s Annual and Polio Plus Funds. Our contributions reached the plus side of $9,276. This accomplishment was due to the endurance and  planning of Bob Bird and his committee,” Proctor stated.

The incoming president noted Bird’s “sound encouragement” for member  donations and innovative Foundation fundraisers such as the ‘Extinguish Polio” project,  may well go on to become a signature fundraiser for our Club Foundation Contributions. The Foundation Committee teamed with Prince Edward County Fire & Rescue to raise $1,898. The “Extinguish Polio” fundraising event was a great success with all of the 80+ fire extinguishers being provided to individuals for a donation to the End Polio Now worldwide campaign to eradicate polio.

Proctor said her path crossed with Bird’s about 20 years ago with the Friends of Picton Hospital advocacy group where the Hepburn trophy award winner implored her to take a leadership role in saving PECMH.

“Bob came up to me and said, ‘You need to become president of this group.’ My eyes  widened but after listening to Bob’s powerful influence, I felt it was my obligation to take on this role. I said ‘I’ll think about it’ to which Bob said  “We need to know today” Bob is powerful, fearless, influential and fuelled by dedication to the cause,” Proctor recalled.

Other important efforts undertaken by Bird in the last year included work with the Jim Barkman Memorial Lilac Ride, the  Wilf Harrison Memorial Golf Tournament, a fantastic sales record for the 2022 Rotary Calendars, sales for the Ukrainian Flags Project and last but certainly not least, the achievement of bringing Angry Bird Restaurant proprietors to the decision for their tremendous  donation that enhanced such a landmark Rotary humanitarian contribution to the refugee crisis in Ukraine.

“My selection as Rotarian of the  Year is a great honour,” Bird told the Gazette. “Every year, through the generosity of our Rotary Club and community members , we are very successful in helping people not only in our community but  throughout the world. An example of this generosity is the  raising of over $60,000.00 for Ukrainian assistance . Our club is a dedicated team working together for the common good.   “Service Above Self ” is our Mantra.”