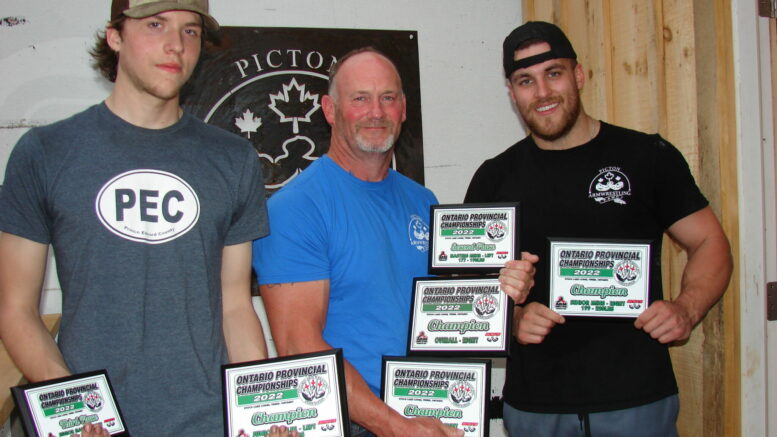 Picton Arm Wrestling Club Members Oaklie Armstrong, Troy Eaton and Jeff Radford after the 2022 Provincials in Tweed May 21. (John McAlpine for the Gazette)

It didn’t take long for a reassembled Picton Arm Wrestling Club to make significant pulls at the provincial and national levels.

A handful of local pullers- both seasoned and fresh to the table- performed well this summer and that includes a local legend who helped rebuild the first incarnation of the PAWC and has returned to compete and foster its growth.

“Today’s version of the PAWC is young and well armed for competition- mixed in with a few seasoned pullers- the club has come away with an impressive medal haul at the Provincial level and made our name known at the 2022 Canadian National Arm Wrestling Championships in Winnipeg,” said PAWC’s John McAlpine. This was a two day event with 574 competitors looking to be fitted with gold. With larger classes comes stiffer competition but Eaton was able to take home the gold in Grand Masters RH 90kg+ class and silver in the mens 90kg+ class RH.

“Radford is rapidly stepping to front of the line and in eight short months, he has captured his first provincial title and finished forth at the national level in his class,” Mcalpine noted. “ Understanding the technique, the dedication, and a desire not to be beaten, he’s loving the adrenaline rushes at the table and is looking forward to next year’s national championships in New Brunswick.

For Eaton, a former household name on the national circuit, a return to the table took some convincing.

However, the results proved there wasn’t much rust when it came time to lock hands under the bright lights of competition

“Teammates I trained with years ago have kids participating in the sport and I was asked to come train them as the club started to build itself back up,” Eaton said “After the first few practices, I felt the passion returning.”

Eaton credited the enthusiasm of the young members of the PAWC that stoked the fires to return to the sport as well as a physical support team that included the likes of Brogan Courtney, Kathy McAlpine Terpstra and Cindy McNeely that assisted him in regaining his form in a physical sense.

“The young kids asked me to give my years of experience to help them grow but I didn’t realize that they were helping me gain my passion back,” Eaton added. “With the help of the PAWC and people like Brogan, Kathy and Cindy to get me back to competitive form, I would not be heading to the 2022 International Armwrestling Championships in Dieppe, France at the end of September.”