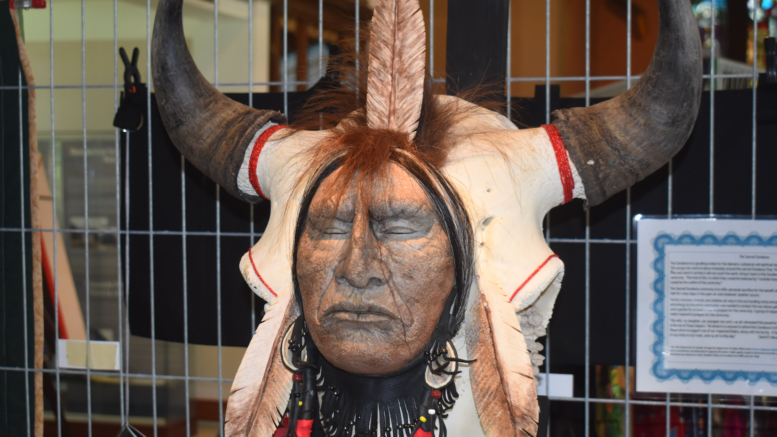 Macaulay Church Museum was host to the opening night of Art and Design, Indigenous Artists’ Exhibit and Sale on Friday, July 22. Though the weather was hot and sticky, a sizeable crowd gathered to take in the offerings of 16 Indigenous Artists.

This is the third incarnation of the exhibit at Macaulay Church Museum and the seventh in total. The exhibition was curated by Narda Kathaleen Julg.

In her opening remarks, Julg thanked the work of Chris Palmer, Supervisor of Museums and Cultural Services and Jessica Chase, Assistant Curator with the County of Prince Edward Museums, for their help in facilitating the exhibition.

Chase spoke to the Gazette about the exhibit’s seven year run and the impetus behind it.

“This is the seventh incarnation of the Indigenous Artists’ Exhibit and Sale featuring artists from Tyendinaga. It is the third time it has been hosted at Macaulay Heritage Park,” said Chase. She was careful to note that there hasn’t been an exhibit since 2019.

Chase pointed out an intention of the exhibit is to bridge the gap between the communities of Prince Edward County and Tyendinaga.

“Narda, the show’s curator, is passionate about building a stronger bridge between the artistic communities in PEC and Tyendinaga Mohawk Territory. By hosting the exhibit and sale at Macaulay Heritage Park, residents of the County are exposed to incredible art and artists that are on their doorstep, and artists from the Territory are able to make connections here in the County,” said Chase. “From a museum perspective, hosting events like the exhibit and sale helps to enrich our museum spaces and make them more inclusive in regard to the stories they preserve and share with our community.”

Kaleen Hanoski’s Two Rows? represent’s two canoes running parallel in the water and the importance of the inhabitants each remaining in their own vessel.

As presented with the unwinding braid, the mixed media piece asks many questions of the viewer such as who was originally in the canoes, who are in the canoes now, is the braid being unravelled or spread out and where do we go from here?

The exhibit runs from July 23-August 11, from 11 a.m.-4p.m. at the Macaulay Church Museum. Entrance is by donation.