Hockey headlines dominating the Canadian news cycle in the midst of a summer heat wave isn’t new. July is the start of the NHL free agent season and so it’s not uncommon for a bombshell trade announcement or free agent signing to pop up, giving radio sports talk jocks something to debate and over analyze with games still months away from being played.
So in one sense, it’s not exactly rare a large portion of the country is talking about hockey right now.
What is unique is that the media coverage of the sport isn’t being confined to sports pages-and the headlines are far from glowing. Hockey Canada is under fire following a report that was made public in May outlining the fact the organization had quietly settled a lawsuit filed by a woman who alleged eight players of the national team assaulted her. The woman alleges she was intoxicated at the time of the assault, which is said to have occurred during a gala event in London, On. four years ago.
The public relations nightmare was made worse for Hockey Canada last week when it was learned the settlement was paid from their National Equity Fund-which is collected from user fees all across the country.
As if registration fees weren’t already high enough for parents and guardians, they now have to live with the idea their cash was used to help the organization attempt to sweep its misdeeds under the rug. Parents have good reason to be outraged.
For their part Hockey Canada issued a statement on July 20 promising to cease the practice of using that fund for ‘uninsured liabilities’ such as settling lawsuits before they can be made public. Instead the fund will be used what users were led to believe it was always intended for, which is safety, wellness and equity initiatives within the sport of hockey.
Better late than never as they say, but the fact it’s only being done in the wake of a scandal is not a good look to say the least.
There’s a lot not to like about Hockey Canada’s actions and some real damage has been caused. This news is a black eye to the entire organization and could sully the opinion of the entire program for some people-which is unfortunate but understandable. Those in charge have let down an entire country. That’s a shame because there are a lot of volunteers at the grassroots level who got involved simply to teach kids how to play hockey. Coaches in arenas all across Canada dedicate their winters to helping kids of all ages and ability play the sport simply for the love of the game.
Ironically, the replay of the 2022 World Junior Championships-cancelled by a COVID outbreak over Christmas- is taking place in Alberta this week. The timing of the international showdown amidst this blackeye backdrop is extremely unfortunate and although this version of Team Canada has no connection to the scandals of the past, it wouldn’t be surprising if the country takes a pass on devouring the tournament as in years past. How can there be a celebration of junior hockey at its highest level given the allegations of what took place in London and Halifax at the 2002-03 World Juniors?
Hockey Canada will have a lot to answer to in the coming days and a major overhaul is needed.  Calls for the leaders of the women’s game- Cassie Campbell-Pascall, Haley Wickenheiser, etc- to replace those at the top in a new era of equitable leadership have risen in recent days and we support that concept.
The legacy hockey patriarchy had its chance. It’s time for a new age.
If history has taught us anything it’s one scandal typically begets another-there may well be other instances of using funds to make problems go away that will soon come to light.  Here’s hoping that whatever dark days are ahead lead to a better product for future generations.
-Adam Prudhomme and Jason Parks
PICTURING OUR COMMUNITY 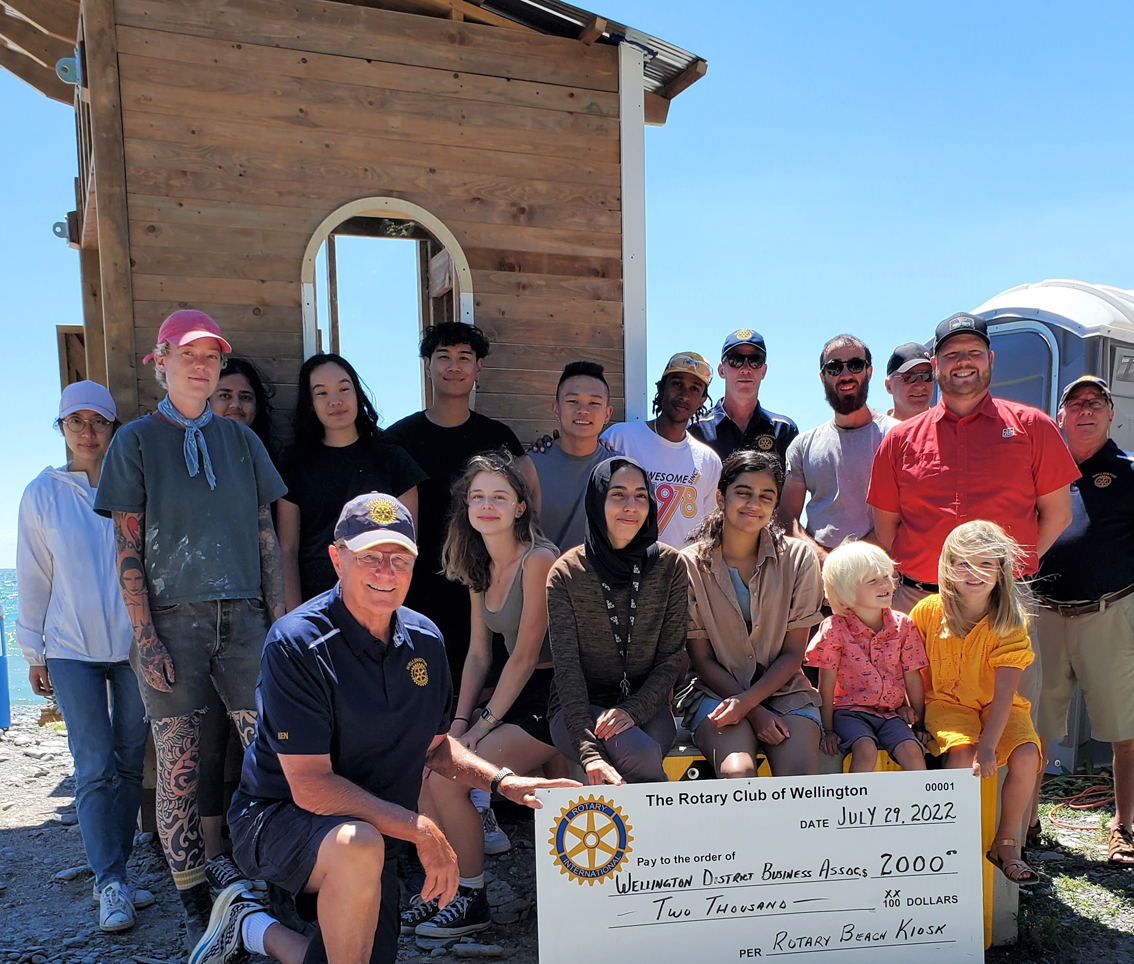 After a two year hiatus, the Wellington District Business Association partnered with the Daniels Faculty of Architecture at the University of Toronto to bring a new and exciting design build to Prince Edward County. This year the group approached the municipality to see about revamping the toll booth at the Wellington Rotary Beach. Adam Goheen (operations director) was pleased to have the group and welcomed the idea. The Wellington Rotary Club was also pleased to see a new addition to the beloved beach and pitched in $2000 to help with the project. (Submitted Photo